Increasingly, console games help us question the ways we see, think or feel about the world, the game, even ourselves.
The Conversation 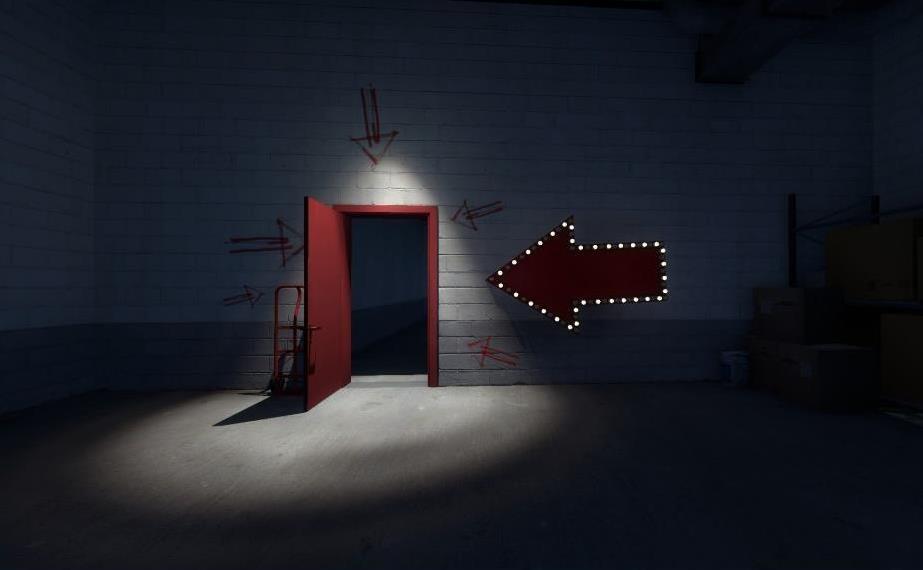 Still from the game The Stanley Parable via structomagazine.co.uk

The Beginner’s Guide is a narrative video game with no goals or objectives. Instead, it tells the story of a person whose psyche is slowing unravelling. Along the way, it touches on issues of depression, loneliness and self-doubt.

I remember the very moment where it all fell into place and I no longer saw the person as a character, but someone going through the same emotional struggles as me. It felt as if the game held up a mirror and fundamentally shifted how I perceived myself. I had been harbouring this constant need for social validation and the desire to find meaning when sometimes there just isn’t any. I didn’t think going into the game that I would come away shaken or with lessons that I still carry with me to this day – but I did.

Even before my experience with The Beginner’s Guide, I had been fascinated with games that strive to create challenging experiences. I don’t mean challenging in terms of logic puzzles or twitch reflexes, but experiences that question the way I see, think or feel about the world, the game, or even myself.

Some of my favourite games that elicit similar responses are Firewatch, a walking simulator where you play as a fire lookout, and Papers Please, a game where you’re an immigration officer for an authoritarian government deciding who can enter. Each offers vastly varying perspective-challenging experiences through player input and mechanics (the systems of rules in the game), allowing for experiences that are unique to gaming.

We know that games can create thought-provoking or reflective experiences thanks to the work of Human-Computer Interaction (HCI) researchers Tom Cole and Marco Gillies. While gaming academics Julia Bopp, Elisa Mekler and Klaus Opwis discovered how a game can cause a negative emotions, such as guilt or sadness, but somehow still result in an overall positive but emotionally challenging experience.

To get at the heart of what makes these experiences perspective challenging, from the mundane to the horizon-shattering, I had players record, report and unpack their experiences in minute detail. My first study identified small eureka-type moments that change how players interact with a game. I labelled these examples of ‘micro-transformative reflection’ – micro in the sense that they don’t shatter someone’s world view, but are still transformative given they change how players act. An example of this is a player who felt extreme guilt after killing an innocent person and avoided killing anyone for the remainder of the game.

Many participants started to get philosophical over topics of morality, predestination, free will, justice and truth. For instance, one participant remarked how The Stanley Parable, which breaks the “fourth wall” by making players battle with a narrator, made them confront how much control they have over the choices they make in their own life. This, the player said, was entirely inspired by how the narrator remarked on their choices in the game.

Finding out how they challenge us

I am currently recruiting for the largest study I have conducted to date. I posted an advert to a Reddit forum dedicated to gaming searching for participants to play a potentially perspective-challenging game over two weeks and keep a diary. I had expected a middling response, with five to 10 willing participants, but awoke the next morning to 500+ upvotes (essentially likes that improve the visibility of a post), 126 comments and a massive influx of new participants. This is further evidence of how commonplace these experiences are and why they are worth further study.

The comments were full of discussion regarding a vast array of games that had challenged players in some way. One user left the following comment about their experience with the dark fantasy game Hellblade: Senua’s Sacrifice:

I’ve never had a game leave me with the feeling that game did. I literally just sat speechless for minutes when the credits began to roll. It’s impossible to describe the sort of cathartic feeling that washed over me when I began to realise the symbolism of the final cutscene [(a video shown on completion that concludes the game’s narrative)]. It was as if all tension I’ve felt up to that point just disappeared and I legit began to cry because it was just that wonderful and indescribable.

The game, which is designed to reflect the experience of living with psychosis, clearly provided an emotionally challenging experience, provoking difficult feelings that fall potentially on the life-changing end of the spectrum.

I’m more than halfway through my study, having gathered 11 participants to speak in detail about their experiences. Across all my research, it is clear how impactful games can be, and I hope that my research continues to uncover the powerful ways in which games can challenge people’s thoughts and feelings.