As the country grapples with pandemic uncertainty, WA’s current position is fortunate. Two of its major performing arts companies may offer a blueprint for recovery.
Jo Pickup 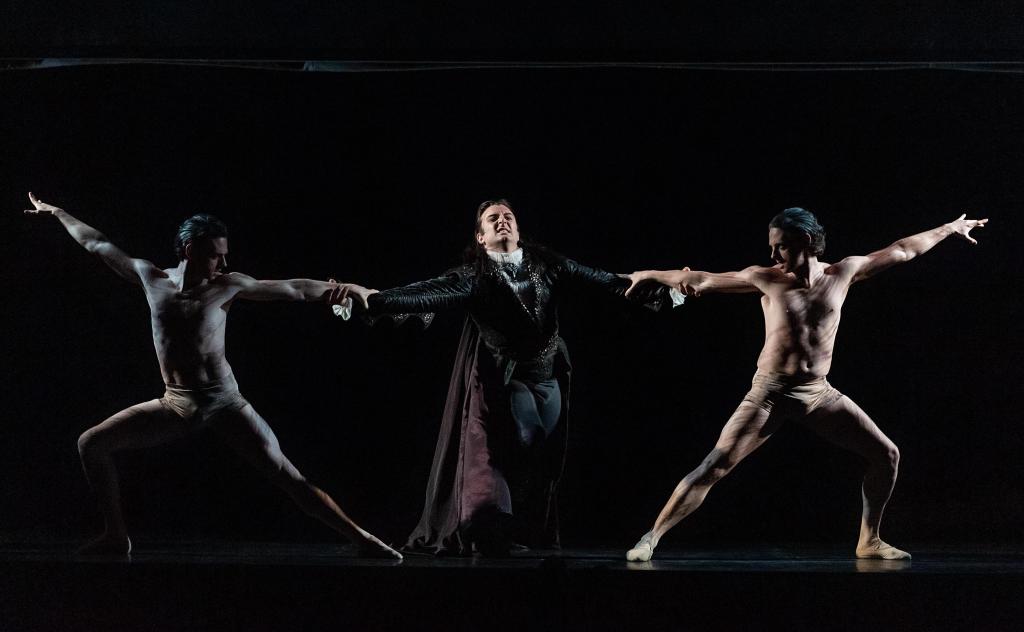 WA Ballet’s Dracula was staged with additional funding from WA Government.  Matthew Lehmann as Young Dracula with Matthew Edwardson and Oliver Edwardson as the Phantoms in Dracula (2020). Photo by Bradbury Photography.

As the country grapples with pandemic uncertainty, WA’s current position is fortunate. There is also a sense of optimism based on WA’s recent 2020/21 budget announcements which, to the envy of other states, predicts a surplus.

Seven months on from initial COVID lockdowns, reflections from two of WA’s major performing arts companies signal that for them, things are rebounding with assistance from the WA Government and local public support.

As Executive Director of West Australian Ballet, the state’s flagship ballet company Jessica Machin’s experience of the pandemic has been intense. The company was quick to reorganise operations during the March-April lockdown period, with measures such as at-home ballet barres for company dancers provided to ensure minimal disruption to daily classes and wellbeing routines.

As Machin reflects on that tricky period, she points to the important role played by the WA Government in its initial grant program for the sector.

‘The events cancellation COVID grant program delivered by [WA Government agency] Lotterywest, allowed companies to submit projections on what their next six months would look like given the COVID situation,’ she said.

‘That subsequent funding enabled many of us not to have to dip too far into our reserves. It also enabled us to put on our production of Dracula during Phase Four restrictions [in September]. So those measures were excellent.’

‘Those grants were flexible and broad ranging, and whilst there was some criticism that they weren’t timely enough, the fact that they turned around such effective support in the tight timeframe they did is admirable,’ he said.

‘Black Swan benefited [from this grant program] really well. We had a broad range of programs supported – from IT infrastructure to additional creative development periods, and we are enormously appreciative of that support.’

These initial support measures were followed up by a longer term state government funding package announced in August as the $76 million WA Recovery Plan for the Arts. This package includes a $30 million spend on the Perth Concert Hall building upgrade, $15 million for upgrades and restoration work at His Majesty’s Theatre, a $15 million Getting the Show back on the Road program, and a $9 million Shared Risk program that supports a percentage of box office loss for performing arts and live music shows in the event of negative COVID-19 impacts.

Jessica Machin views the $9 million Shared Risk program as a particular highlight of this package.

‘WA is leading the way with this funding program which gives performing arts companies’ confidence to plan seasons knowing that any unforeseen losses due to future COVID shutdowns or restrictions will be guaranteed by government,’ she said.

Rick Heath is also supportive of the $76 million package, though is disappointed about the amount directed towards operational support.

‘A significant amount of that $76 million is for building works, so to call it arts money is not entirely accurate,’ he said.

‘A significant amount of that $76 million is for building works, so to call it arts money is not entirely accurate.’

‘We are nervous about the longer term and the ongoing uncertainty,’ she said.

‘Stability of funding from Government will be critical – the Department of Culture and the Arts WA needs to have surety of its budget in order to ensure continuity of its programs.’

‘I see it as part of a shift in how we can expect to be funded on an ongoing basis, and where the responsibility lies, and where other revenue streams will come from,’ he said.

‘I’m not complaining about this. The pandemic experience has actually highlighted where new opportunities can be harnessed,’ he said.

Whilst COVID has altered financial variables for both Black Swan Theatre Company and West Australian Ballet, it’s not all bad news. Both Heath and Machin report positive signs of support from the general public and corporate supporters in the wake of the pandemic.

‘Corporate sponsors like Perth Airport, who have obviously taken a massive hit during the crisis, haven’t pulled their Black Swan sponsorship, they have postponed it until next year,’ Heath said.

‘And for others where we had to cancel performances and change the deliverables for our sponsors, they have been flexible and accommodating. In fact, some of them have said that what we did for them this year is more exciting than what we’ve previously done, and that they’d like to continue that next year.’

‘So that’s been really good. It’s pushed us to work in new ways with them and I think it’s deepened our engagement with each other.’

‘We have also seen a 512% increase in donors to our end of financial year giving campaign this year,’ Heath said.

‘A lot of that giving was small donations from people who have previously not had strong relationships with the company.

‘Also, in relation to our cancelled shows, we had $53,000 in donations from people who donated their cancelled ticket price to the company.’

Jessica Machin has witnessed similar trends at the WA Ballet. ‘The generosity of Western Australians has been extraordinary,’ she said.

‘The generosity of Western Australians has been extraordinary.’

‘We’ve registered over 400 new donors to our philanthropy program since COVID with many people donating their tickets [instead of getting refunds] when we had to shut down.’

‘I think this indicates heightened levels of compassion and support for the arts from the general public,’ Heath observes.

‘But, on the whole, that hasn’t yet translated in terms of government support,’ he said.

Jessica Machin agrees. ‘There are still some key opportunities that the government need to recognise in terms of arts and culture’s role in assisting mental health and wellbeing, and there is definitely room for more partnerships and collaborative initiatives in that area,’ she said.