An exploration of the feminist gaze through 'the Monica Lewinsky experience'.
Jo Pickup 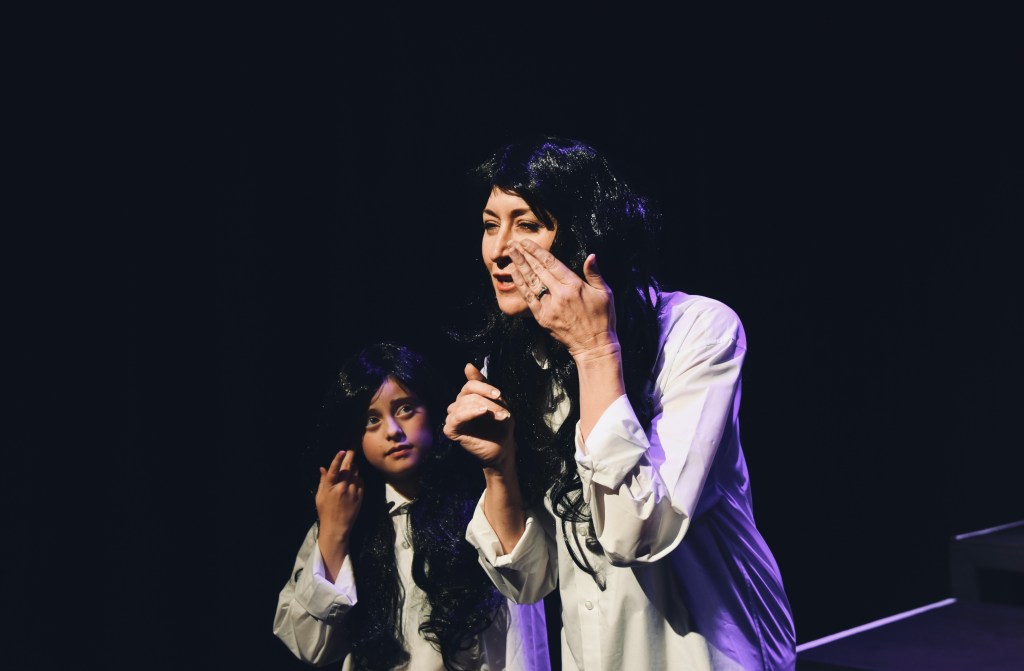 Performers Elisa Williams and Lula Blythe-Williams in a scene from MONICA. A Public Apology by Tempest Theatre. Photo by Alina Racu Photography.

Ten feminist performers of diverse backgrounds and ages stand should-to-shoulder facing the audience. They are clad in white shirts and black pants with shiny dark brown wigs on their heads. Their intention is clear as they say in unison, ‘I am Monica’.

Of course, we know exactly who they mean.

Some 20 years have passed since the Clinton Affair made headlines around the world, yet we still know who it is when terms like ‘that woman’, and ‘that dress’ are mentioned – and it’s this person who is the subject of Tempest Theatre’s latest work.

Directed by Susie Conte (Tempest’s Artistic Director), this feminist piece serves us rich and provocative reminders of the Monica Lewinsky experience. But these memories take us far beyond that particular 1990s sex scandal and prompt us to reflect on some personal and societal judgements of women (their bodies and behaviour) throughout history and today.

It’s an intimate 60 minute journey whose impressions last beyond its curtain-call, raising hours of tricky conversations for viewers to have in its wake.

That said, the work’s early scenes are surprisingly playful in mood.

‘January 21, 1998. I was planning my wedding,’ says performer Shona McGregor from an upstage corner, as she remembers her life when the Monica story broke.

These lively anecdotes come thick and fast, but they soon lead to more serious territory.

The performers move us through Monica Lewinsky’s life (with impressive performances by emerging actors Shelby McKenzie and Elizabeth Offer in particular), and the connections they draw between their own lives and moments in history (and art) make us realise that Monica is far from the first female adulterer to be judged guilty by public opinion and condemned for her ‘sins’.

On this score, the work is sophisticated and sharp. Its script is full of poetic pointers that lead us to question topical societal beliefs which are (in this reviewer’s mind, anyway) in need of our urgent attention. As a work borne out of the #MeToo era, it attempts to go deeper than the present moment, and engage with larger and potentially more concerning questions in which we all prove culpable.

There are, however, some aspects of the piece in need of more polish. While the script and structure take us on a thought-provoking ride, some scenes feel blurry in resolution, and deserving of greater space.

Its simple three-tiered stage set is also a small liability – only because on the night of this review it contained a few creaky spots that were distracting (a symptom of low budget independent theatre and most likely beyond the production’s control).

Overall, this piece is clever and innovative in concept and design. There appears to be room for even further development (a good thing!), but as it stands, Monica is still an admirable addition to Tempest’s impressive repertoire of works that are unflinching and imaginative in their feminist gaze.