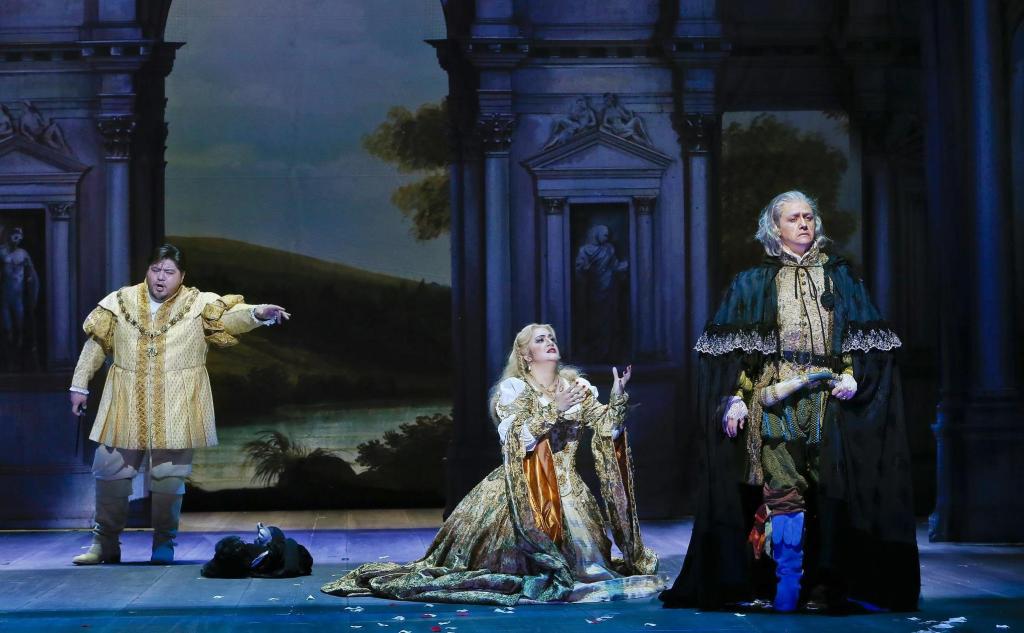 One of Giuseppe Verdi’s early efforts, but rarely performed these days, Ernani has been plucked from obscurity by this Opera Australia co-production with La Scala. By simultaneously looking to the past and winking at contemporary audiences, director Sven-Eric Bechtolf allows this opera’s neglected music to shine once more. An extraordinary international cast of singers make the most of the opportunity.

Premiering in Venice in 1844, Ernani was a hit, even going on to become the first fully recorded opera 60 years later. It fell out of favour during the 20th century, most likely because of a plot that’s preposterous even by operatic standards. Set in early 16th century Spain, Ernani is a love quadrangle further complicated by fierce political rivalries. The title character is a nobleman turned outlaw rebel. He and Elvira are in love, but she’s being vigorously pursued by two others: her uncle, aged nobleman Don Ruy Gomez de Silva, and the king, Don Carlo, who is also scheming to become Holy Roman Emperor.

These broadly drawn characters and their impulsive decisions, inspired by passion, jealousy and antiquated chivalric ideals, make Ernani an absurd melodrama for modern audiences. This production frames it in a way that we can detach from the plot and focus on Verdi’s glorious music. Bechtolf’s Ernani is an opera within an opera: a 16th century tale presented in the 19th century, complete with the latter era’s costumes for ‘off-stage’ cast and crew. The set’s painted scenery is ostensibly cranked into place with a manual pulley system, while cut-outs and props are carried on and off stage by actors playing stagehands. This old-fashioned, often intentionally raw approach is in fascinating contrast to the largely digital set for Opera Australia’s concurrent Melbourne production, Aida.

The concept of an opera within an opera is emphasised early on visually as well as comically, including with some amusing wordless capers by 19th century bit players and stagehands (who, together with 19th century musicians, aren’t so funny trying to fill dead time between acts). Once the conceit is established, Ernani is allowed to play out with fewer contextual signals and gags. Fully staged scenes continue to openly merge in and out of the world beyond the proscenium arch, however, which seems unnecessarily disruptive. Either way, Julian Crouch’s set is a charming peep into the past, while Kevin Pollard’s costume design is at its sumptuous best when Spanish High Renaissance finery is massed for the Act IV wedding. 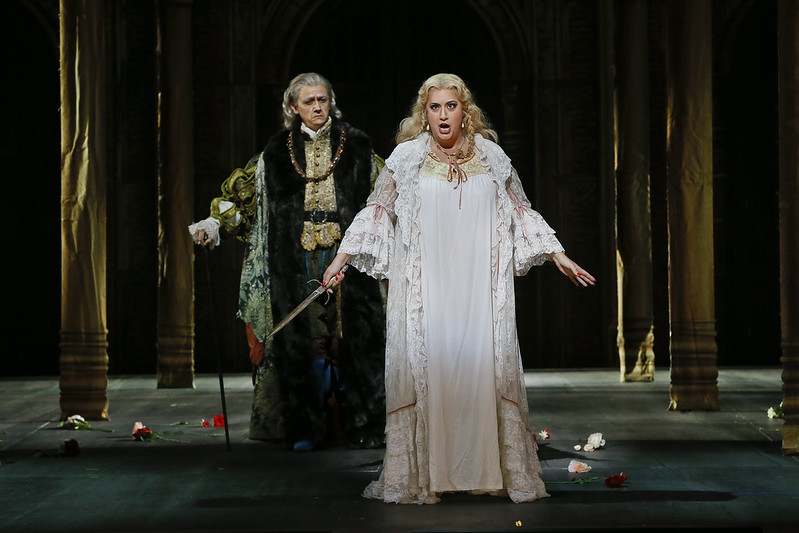 As part of the production’s early comic context, Armenian-Australian soprano Natalie Aroyan gently exaggerates her melodramatic gestures in Elvira’s opening aria. It’s delightful, but a mere footnote to this showcase of coloratura singing in which Aroyan leaps and dives through her considerable range, up to top notes of bell-like clarity. Her powerful, agile voice continues to astonish throughout the performance. As Ernani, Mexican Diego Torre hits some very slight speed bumps early on when rising from his middle to upper register, but soon reveals a true Verdian tenor voice: high, strong and lithe.

Russian bass Alexander Vinogradov is a compelling Silva, both as an actor and singer. A standout in an Aida supporting role at the moment, here he can really show off the control, refinement and beautiful burnished timbre of his voice, and also give dignity to a character one could easily despise. In the role of Don Carlo, Bulgarian Vladimir Stoyanov deftly suggests both a dark, scheming nature and noble gravitas. He takes advantage of his one great solo moment, the Act III aria ‘Oh! de’ verd’anni miei’, to fully reveal the richness of his baritone.

The principal cast’s ensemble singing is splendid, and both the Opera Australia Chorus and Orchestra Victoria, conducted by Carlo Montanaro, are in fine form. Together, they leave us in no doubt Verdi’s music isn’t the reason why Ernani hasn’t been seen in Melbourne for generations – and wondering if any of his other neglected operas might be worth plucking from obscurity.