Ever felt guilty about an expensive, even extravagant designer purchase? Now imagine how guilty you’d feel if the product you bought listed human fat as one of its ingredients.
Richard Watts
[This is archived content and may not display in the originally intended format.] 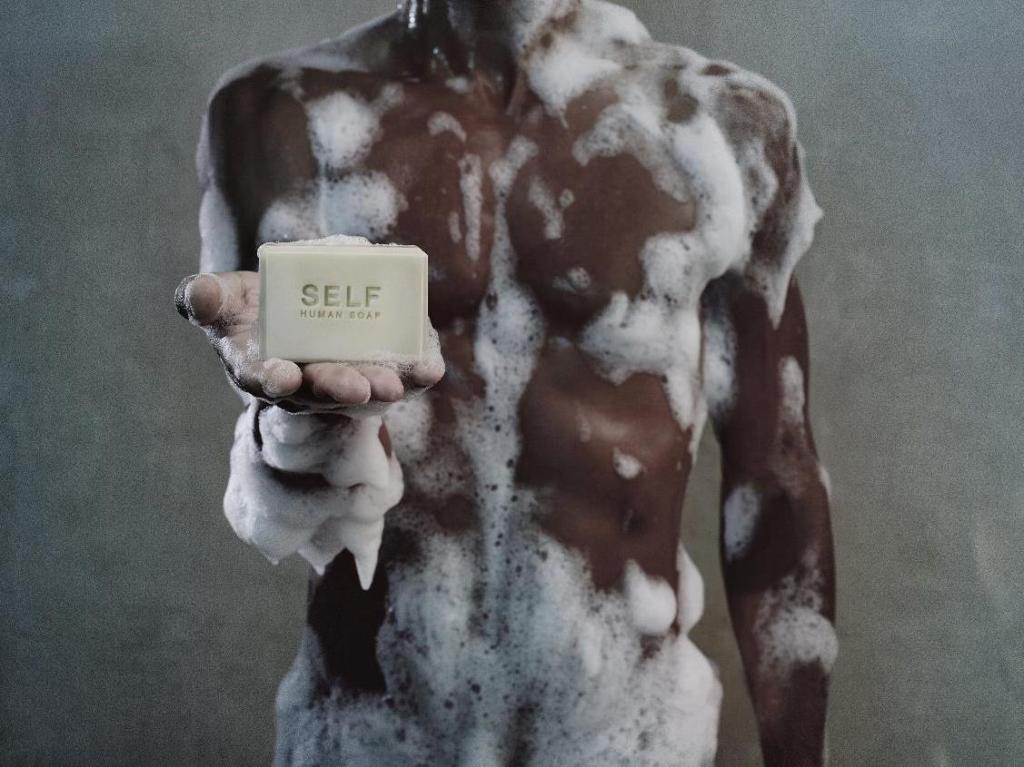 Shock, disbelief, revulsion: people’s reactions to the existence of soap made from human fat are immediate and visceral.

For $35, bars of SELF Human Soap can be purchased at a pop-up shop in Adelaide whose stark white walls are branded with phrases such as ‘From people for people,’ and ‘Wash the pain away’.

Behind the façade and the packaging, a provocative and immersive artwork encourages us to think about over-consumption, guilt, temporary quick fix solutions to looming problems, and other aspects of life in the West – aspects of life which are rarely as well defined as the packaging of a bar of soap, whose listed ingredients include olive oil, coconut oil, lye and yes, human fat.

Created by German artist Julian Hetzel, Schuldfabrik (a double-edged word suggesting both guilt as moral duty and debt as economic obligation) is a shopfront art installation accompanied by a promenade theatre piece unfolding across a series of rooms in a nearby nondescript Adelaide building. An unseen, impersonal voice tells the small audience, limited to six people at a time, when to move onto the next room.

First we must empty ourselves, a brusque woman orders us, gesturing at a set of cubicles, but rather than purging physical waste, this first aspect of the work takes on a ritual quality of confession and provocation. Evoking both community and isolation, it prepares us for the next room, where Dr Hennie Spronk explains the process of liposuction before demonstrating the technique on a recumbent patient.

Even though the body is clearly a prop, albeit one made with great attention to detail – hairs fleck the bulbous belly and skin tags and freckles are clearly visible – there’s a moment of genuine revulsion when liquidised fat is sucked from beneath the skin and spurts, dripping, into a nearby jar.

Subsequent sequences look at the process by which the fat is transformed into soap; explore the hidden labours that prop up our comfortable Western lifestyles, and encourage contemplation of excess and cleanliness. The final room features a corporate-style presentation, delivered with convincing charm, detailing the ways in which sales of the human soap created as part of Schuldfabrik benefit a settlement in the Congo: First World waste repurposed to pay for clean water and hygiene products in the developing world.

Weight loss from liposuction is a quick-fix remedy with few long-term benefits; the fat lost through such procedures invariably and quickly returns.

Encouraging its audience to consider humanity’s stubborn refusal to treat health problems seriously and permanently – and by extension other crises facing the planet – this provocative and confronting performance installation also raises questions of consent and authenticity. How reliable a narrator is Julian Hetzel – are his claims about the nature of the work more trustworthy than a liposurgeon promising impossible benefits for his patients?

A closer reading of the packaging of SELF reveals the following phrase: ‘SELF is not a sanitary, nor a cosmetic product. SELF is an artwork.’

Conversely, one of the rooms in the ‘factory tour’ that makes up the performance displays the legal documents drawn up in the preparation of Schuldfabrik, referencing the options for liposuction patients who wish to reconsider their participation in the project after the surgery has been performed. Reinforcing the artwork’s factual nature, such documents unsettle even as they solidify our belief that what we are experiencing is real. They encourage us to ask: who owns our bodies, really? Is everything, ultimately, for sale? And who benefits most from such transactions?

Exploring issues around body image, priviledge and economic disparity, Schuldfabrik is a bold, challenging and provocative artwork executed with dexterity and flair. If only the solution to every challenge facing the planet was as neat as washing away guilt with soap made from excess, ethically sourced human fat.