Expert direction, dynamic performances, dazzling writing and design create a biting, clever and inspiring comedy.
Robert Chuter
[This is archived content and may not display in the originally intended format.] 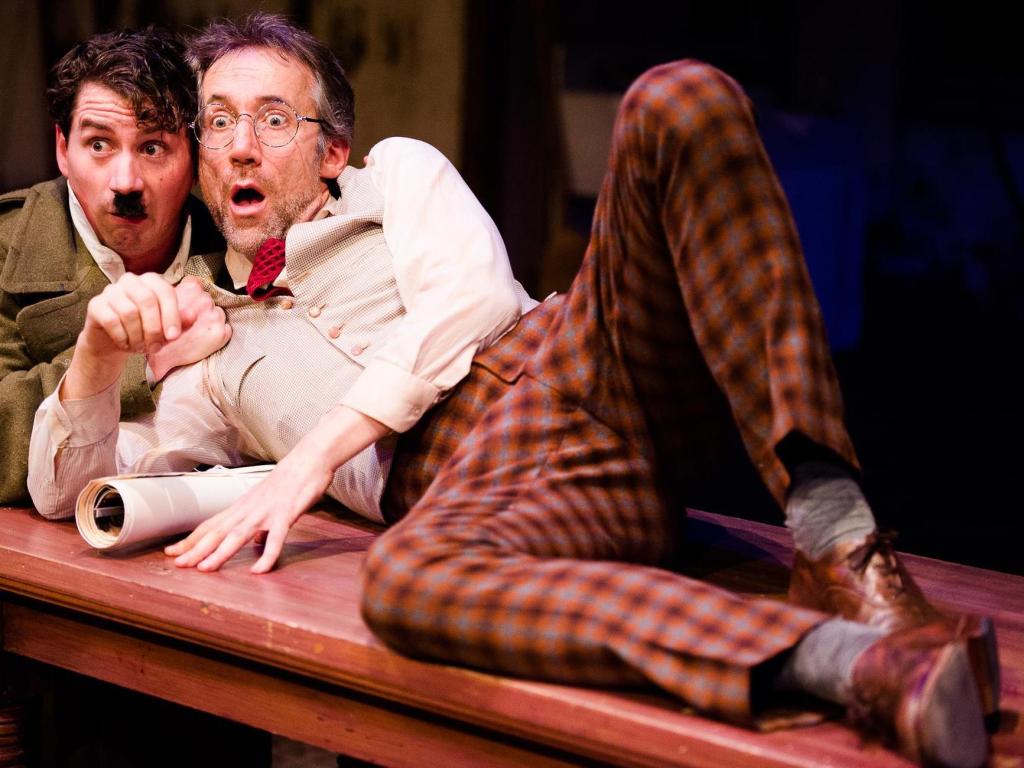 Ever been stuck with a nightmare roommate who harbours delusions of grandeur? Most of us have a few horror stories about those we’ve lived with in the past. Imagine that situation multiplied to the point where the setting is Vienna and the nightmare roommate in question is a young enthusiastic art student (or applicant anyway) named Adolf Hitler… and his closest ‘friend’ is a Jewish hawker! Throw in God (or his nearest equivalent), a Catholic lover and even Mrs. Death and we have the extraordinary black comedy Mein Kampf. In this zesty, hilarious, and disturbing encore season by 15 Minutes from Anywhere this time at fortyfivedownstairs, talented director Beng Oh has crafted a sharp and multi-faceted production that combines farce and satire with a great ‘what if?’

Writtenby Hungarian writer George Tabori, the play was a sensation at its premiere in 1987 and achieved the near-impossible task of making the Germans laugh at the Nazis. It is still a riot, taking pot shots at the Führer and his ideology with the accuracy of a sniper. (Tabori’s family were killed at Auschwitz, with his mother the sole survivor).

The play introduces us to Shlomo, the Jewish hawker who lives in a hostel and has been working on a book called Mein Kampf for a few years. As played by the sublime Steve Gome, Shlomo is a charming rogue who lures us right from the beginning into the play. When an unmannered and obnoxious German turns up (you know who) at the hostel looking for a place to stay while he prepares for his art school interview, Shlomo takes him under his wing, cleaning up his image, giving him his winter coat and trimming his moustache into that look before sending him on his way. When Hitler is rejected, Shlomo makes the suggestion that he go into politics and world history is tragically set on course.

Naturally, the comedy is as black as pitch. Thanks to focused writing, the brilliant pace and rhythm hits every bullseye without falling into bad taste (you haven’t lived until you have seen Hitler get a rectal thermometer or, more disturbingly, see him kindly offers to buy Shlomo the gift of an oven ‘to keep him warm’). The real magic of the play is its gradual transformation from a very dark comedy to a disturbing tragedy which is almost imperceptibly seamless – the result is potent.

The quality of this production is a credit to Beng Oh and his talented cast, who each have the timing and precision of an army drill team. Glenn van Oosterom’s out-there Hitler is a perfect match to Gome’s Shlomo Herzi. Oosterom’s motormouth egotist is not just a brilliant parody, but is so grounded (no pun intended, considering his entire performance is on his knees), that he betrays the confusion and insecurity that could truly morph into one of history’s greatest monsters – a performance both hilarious and terrifying. Gome’s deadpan Shlomo is an intelligent undying optimist, encouraging little Adolf even when his patience is tested to the extreme. Stunning support is provided by David Kambouris (who wowed audiences in La Mama’s The Object of Desire back in 2007) as Lobkowitz, (aka God) adds another highlight to a series of memorable performances. Stephania Pountney devours her role as Shlomo’s Catholic but sexually uninhibited girlfriend and Sarah Bollenberg is tight as Frau Death. Troy Larkin as Himmlisch also proves memorable as he delivers the most disturbing metaphoric monologue in recent memory. While gutting a chicken onstage (already dead, don’t worry), he displays the perfect balance of menace and glee, he’s a human hurricane that leaves a poignant aftermath in his wake. Oh manages to keep a deft and keen eye on so many elements, maintaining a consistent tone throughout.

Lighting and production design are flawless. Lighting designer Stelios Karagiannis’ lush blue and golden hues suggest more than just time and place, and naturally highlight subtext without imposing expressionism on to a farce. Likewise, Peter Mumford’s set of bunk beds, sheets, table and chairs suggests place perfectly, without intruding on the action. It gives a sense of intimacy which, given that fortyfivedownstairs isn’t an instantly intimate space, is no mean feat, especially when restaging a play from a tiny space like La Mama.

I must confess, I didn’t see the original production, however this production oozes the confidence of a long-running show – a rarity in Melbourne – bringing La Mama’s best to a larger audience. With Mein Kampf, the combination of expert direction, dynamic performances, dazzling writing and design create a biting, clever and inspiring comedy that packs a harsher punch than most dramas. Highly recommended.