Who’s afraid of Aboriginal art? Not the Art Gallery of SA

The Art Gallery of South Australia adopts the philosophy that education is the pathway to understanding.
Gina Fairley 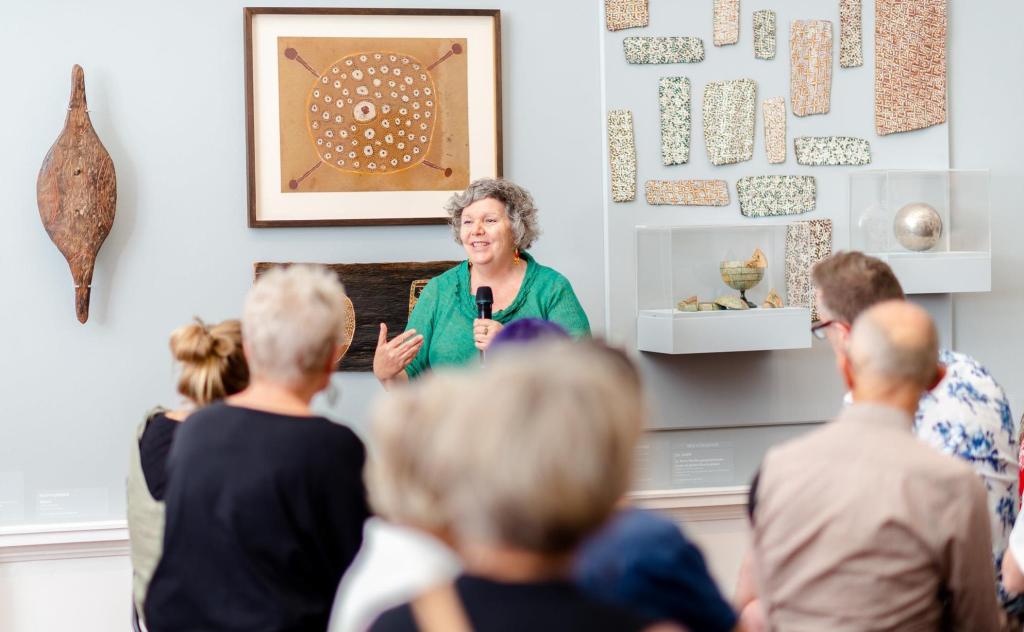 Aboriginal artists educators and curators at the Art Gallery of South Australia (AGSA) have worked with teachers to embrace new ways of teaching Aboriginal and Torres Strait Islander art in a culturally sensitive and respectful way.

‘It continues AGSA’s philosophy that artists are at the centre of everything we do,’ Assistant Director AGSA, Lisa Slade said.

Working with contemporary Aboriginal artists, including those exhibiting as part of Tarnanthi 2019, and using the Gallery’s collection of Aboriginal and Torres Strait Islander art in an intensive workshop environment is core to much of AGSA’s philosophy, and has been designed to highlight ideas and strategies to prompt thoughtful and respectful dialogue with Aboriginal people about their cultures and histories.

Following the success of the workshops a new publication for teachers nationwide will be launched ahead of AGSA’s flagship program, Tarnanthi (17 October 2019 – 27 January 2020). The publication, titled, Aboriginal and Torres Strait Islander Art in the Classroom, is available on pre-order.

‘I would say that Tarnanthi has given us the opportunity to have some conversations that have been rarely held across the country and in classrooms,’ said Slade of the initiative. ‘It is not just something we do once a year in exhibition spaces – Tarnanthi happens all year round in the gallery and beyond.’

Slade told ArtsHub that the workshop program for teachers started in 2017, when it was piloted with just 23 teachers.

‘In 2018 that became 320, with four sessions booked out. What we were responding to was the very palpable fear around teaching, and presenting, the art and cultures of Aboriginal and Torres Strait Island artists in their classrooms.

‘We had presented an earlier session with the general public, “Who’s afraid of Aboriginal art?”, and given the large numbers that attended, we stood back and thought this is something that educators would be super interested in, our approach to demystifying and debunking how you approach this material. It also came at a time when the curriculum had shifted, and there were now many roads into Aboriginal art and cultures – not just the art road.’

The publication and workshops are part of a holistic philosophy embraced by AGSA. ‘You can’t act on the world outside, unless you change the culture within,’ Slade explained of the Gallery’s approach.

Slade said the Gallery’s initiative to bring Aboriginal artists and educators into the same room was about creating a safe zone where teachers felt they were not being judged about whether or not they were going about things the right way.

She points to AGSA’s recently launched Reconciliation Action Plan, the first state gallery in Australia to implement a RAP. It opens with the statement: ‘We understand that Aboriginal and Torres Strait Islander art is not separate from the national story but an essential part of it. We also recognise that creating and sharing art is a crucial element in maintaining and continuing cultural knowledge among Australia’s strong, resilient and adaptive First Peoples.’

Slade concluded: ‘If you want to, you can make it happen … we all need to work a bit harder.’

A good place to continue those conversations is at the Tarnanthi Festival of Aboriginal and Torres Strait Islander Art.  The Gallery is preparing for the Festival’s third edition – a city-wide event that extends this philosophy of outreach and education.

Tarnanthi is led by Artistic Director Nici Cumpston, AGSA’s Curator of Aboriginal and Torres Strait Islander Art, and opens the weekend of 18 – 20 October.