Proving distance isn’t a barrier – a case study for engagement

After a challenging year, Kalgoorlie’s Goldfields Arts Centre is facing a resurgence of interest, but it is a spike that builds on solid ground.
Anthony Morris 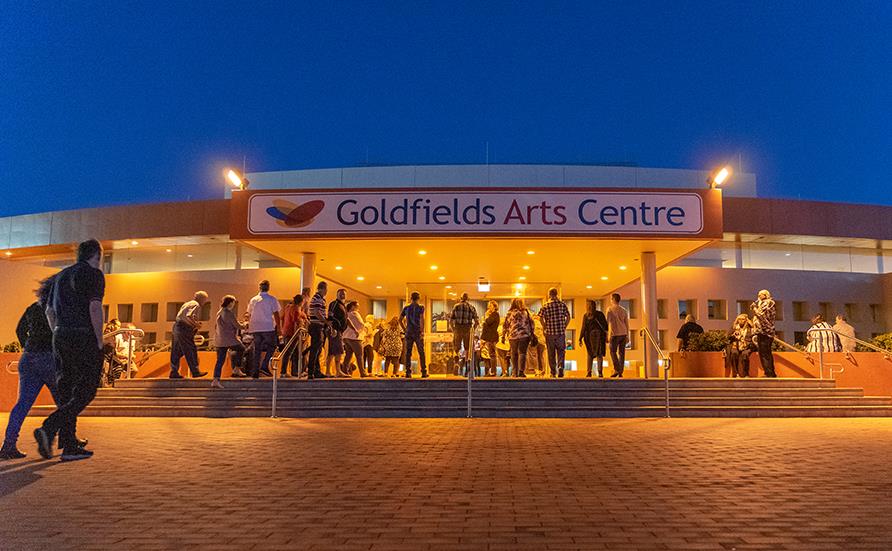 As the only major multi-functional arts venue between Perth and the eastern states, Kalgoorlie’s Goldfields Arts Centre has a unique selling point for touring acts.

‘We’re a great stop on their way between east and west, particularly if they’re touring by road,’ said Lauren Chapman-Holle, a spokesperson for the venue.

‘It’s a wonderful opportunity for touring acts to break up their long haul from the eastern states to Perth, or vice versa, by performing to a really engaged and enthusiastic audience.’

Located 600km from Perth and serving a town of around 30,000, plus the surrounding region, the venue consistently showcases touring performances from both local acts and internationally travelling performers.

‘We host a range of shows, from Bluey’s Big Play stage show for kids, all the way through to the Western Australian Ballet and Opera Australia, to Margaret Fulton the Musical and the Melbourne International Comedy Festival Roadshow,’ said Chapman-Holle.

Comedy is always a big hit with the locals. Kalgoorlie’s favourite son is also a frequent visitor. ‘Kevin “Bloody” Wilson is a regular on our stage, what with being a Kalgoorlie boy himself,’ added Chapman-Holle.

A region with high demand

In the wake of COVID, and with the borders now re-opened, there’s a large demand for live performance in the region, and the right show can often exceed expectations.

‘With the Bluey stage show the first one sold out in about two hours,’ said Chapman-Holle. ‘We hadn’t even had a chance to promote it – someone saw one of the flyers sitting on the counter, took it, the “dance-mum-grapevine” got going, and the tickets sold out in couple of hours.’

Three additional shows were scheduled to meet the demand.

It is testament that distance is no barrier to engagement, rather the opposite, guaranteeing Kalgoorlie a place on the touring ticket.

‘Shows that audiences are loving everywhere else, I can guarantee audiences in Kalgoorlie-Boulder are going to love it too,’ said Chapman-Holle. ‘People will travel from across the goldfields to come to a really fantastic show here.’

While the Centre is located in Kalgoorlie, and operated by the City of Kalgoorlie-Boulder, the catchment area takes in a vast range of the surrounding goldfields regions.

‘We’re quite isolated and the people who live in our town embrace the opportunities to see a wide variety of performances,’ said Chapman-Holle. ‘Being able to offer these fantastic shows to Kalgoorlie-Boulder and the surrounding community is so important.’

It is not surprising then that the venue has recently undergone a series of upgrades and refurbishments to cater for that demand.

Chapman-Holle said the centre provides an extensive variety of services to the region beyond the 700-seat auditorium.

‘We’re not just a theatre venue. We also have a gallery and ensemble room, dance studios, multiple gallery spaces and a number of function rooms,’ she explained.

These facilities are in constant demand as a focus for the region’s thriving arts scene.

‘Our local dance schools use the dance studio, and local high schools stage their productions here,’ said Chapman-Holle. ‘We have two very active community theatre groups in Kalgoorlie-Boulder, and our gallery space always has exhibitions rotating through.’

The centre also provides support for other arts-related activities in the region.

‘Film production companies utilise some of the spaces as production offices when they come through town, because they need that kind of professional base to work from,’ Chapman-Holle told ArtsHub.

All of this adds up to create a vital part of the social, as well as artistic, fabric of the region.

‘We’re six hundred kilometres from Perth, we’ve got 29,000 people in the town site, and they’re keen for things to do. We want to offer them as much diversity as possible,’ she concluded.

Discover all that the Goldfields Arts Centre has to offer by visiting their website.