Miffy’s iconic minimalist design created by Dutch illustrator Dick Bruna has influenced artists in Australia, and all over the world. For the first time, QUT Art Museum brings Bruna’s work to Australia in a major exhibition.
Andrea Simpson 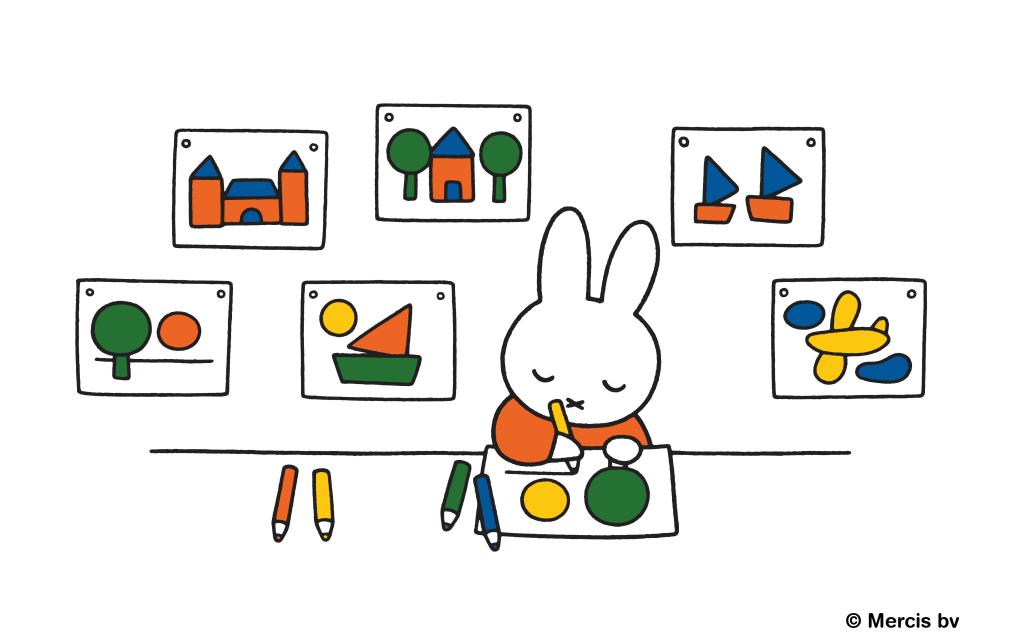 The simple lines of Miffy embody the universal language of Minimalism. While Miffy is undeniably iconic, many aren’t aware that her conception is grounded in avant-garde ideas of abstractionism, colour theory, and the Dutch movement De Stjil.

‘Many people don’t understand how difficult it is to capture the essence of something in such simplicity,’ said QUT Art Museum Director, Vanessa Van Ooyen.

Sixty-five years ago when Dutch artist Dick Bruna (1927-2017) created Miffy as a bedtime story for his son, he could not have envisioned the beloved children’s book character would become so globally-recognised.

Miffy’s design has seeped into pop-culture. ‘A lot of people think Miffy is Japanese because she’s so popular there and of course there is the court case around the makers of Hello Kitty who Bruna sued for copyright infringement in relation to Cathy rabbit, Hello Kitty’s friend. But really everything about Miffy is embedded European Modernism,’ Van Ooyen explained.

In honour of the Dutch illustrator’s legacy, QUT Art Museum will launch the major exhibition miffy & friends running from 21 November through to 14 March 2021. This exhibition will bring the work of Dick Bruna to Australia for the first time, and also explore his influence on Australian contemporary artists.

‘There has been substantial research behind Bruna’s influence with a major exhibition at the Rijksmuseum in 2015,’ Van Ooyen told ArtsHub.

‘And that’s what’s really been amazing about this project. It uncovers a narrative in many contemporary Australian artist’s work, how they have drawn inspiration from or share the conceptual concerns of Bruna and his development of Miffy,’ she said.

Miffy’s simple yet elegant two dots for eyes and a cross for a mouth inspired many young creatives.

Van Ooyen said that Nell’s practice was shaped by Bruna’s work. ‘She claims Bruna as one of her greatest influences. We have included objects from her childhood alongside some of her iconic work, as well as a personal letter from Dick Bruna which she received when she was at art school.

Miffy has endured across generations. Van Ooyen remarked about the enduring love for Miffy from all demographics. ‘We have Carla McRae, an exciting young designer and illustrator talking about Bruna and his legacy on her practice then we have Miffy animations on ABC Kids at the moment.’ Miffy holds no biases toward age.

In miffy & friends, original drawings, silkscreen prints and first edition books are loaned from Dick Bruna’s estate, Mercis bv in Amsterdam. The exhibition is a celebration of joy and a love of the simple things in life but also reminds us of the power of art to impact on our feelings and emotions.

Mercis bv’s Marja Kerkhof, who worked with Dick Bruna for 22 years, said: ‘I think one of the secrets of his work and its universal appeal is the whole idea of family, friends and relationships, which is the basis of his work.

‘He always said, “Your childhood is like your luggage, and if that starts well, that’s a real present for the rest of your life.” I think that is really what you feel,’ Kerkhof said.

Working with Bruna’s estate and the Dutch Consulate in Australia, Van Ooyen said: ‘Mercis have been very open and accessible. They’ve been fantastic in making these original works available. And it’s quite amazing to see all the activities that they manage around the world in terms of Miffy, and Bruna’s estate. They have supported the project from go and the only disappointment is that they won’t have the opportunity to attend the exhibition here in Australia, although they’ll be able to view it in the virtual tour.’

Van Ooyen added that Bruna’s work was universal in its simplicity, and the exhibition encapsulated this.

‘The stories I’ve heard about [Bruna] are all about how he was such a kind and empathetic individual. And that’s what Miffy is about. She’s about joy, about understanding and family and friends. The story of Miffy is really about love,’ she said.

QUT Art Museum Gallery was determined to bring Bruna’s work to Australia for the first time, smoothly mitigating the impacts of COVID19 to ensure access for the Australian audience.

‘Certainly with the impacts of COVID, there was question over the exhibition, and although there have been a few changes, it’s gone as planned. And the exhibition will be touring to Bunjil Place next year,’ Van Ooyen told ArtsHub.

Access was also a focal point for the gallery. Van Ooyen told ArtsHub, ‘At QUT Art Museum, we celebrate the power of art to engage people with special needs. As part of miffy & friends, we will have audio descriptions for people who are blind or have low vision, a social story to help facilitate the gallery experience for our neurodiverse audience members, and a quiet hour for those who prefer to look at art in a calm environment.’

The exhibition also features an augmented reality component, encouraging visitors to engage with Miffy and her story in new and interesting ways.