No longer boxed in by traditional boundaries, contemporary textiles present as a dynamic and bold frontier nurtured by the Wangaratta Contemporary Textile Art Award, and its growing collection of national significance.
Gina Fairley 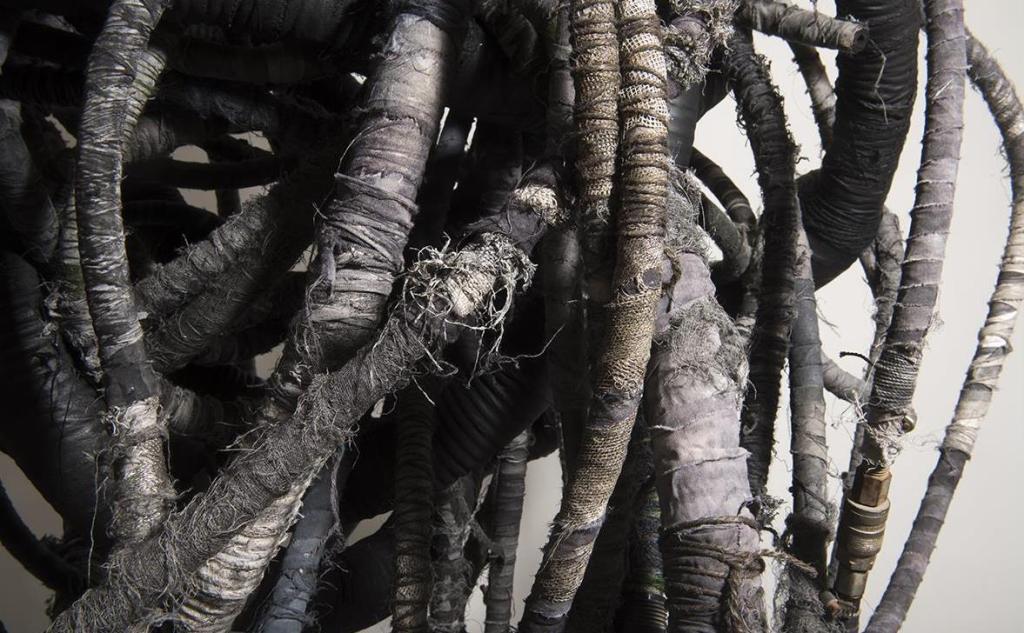 ‘What we have observed through the award is that boundaries between mediums in contemporary practice are breaking down, and artists are shifting across multiple mediums relay their message. Many are discovering the use of textile mediums as a form of expression, and exploring and refining their techniques to achieve their desired outcomes,’ Simone Nolan, Director Wangaratta Art Gallery, told ArtsHub.

‘That can be controversial for those who have spent a lifetime mastering a certain weaving technique, for example, and then someone comes along and is given visibility. But it is a win for all, as the textile medium is often being re-interpreted, techniques are being used picked up in many different ways, and the rules are no longer limiting the artists.

‘We need to follow that trend forward,’ Nolan added.

Nolan described the Wangaratta Contemporary Textile Award (WCTA) as ‘one of our sign post events … a really cool thing that we do.’

The $10,000 biennial award is acquisitive and has created a platform for textiles as ground-breaking contemporary art form since it was established in 2009, with the aim to remain at the forefront of textile practice in Australia.

‘When we do selections, we try to keep that in mind – to choose highly resolved works, both technically and in terms of expertise, but also for their experimentation – to take textiles forward into the next stage of contemporary expression,’ said Nolan.

‘Historically in Wangaratta there has been a grass roots movement in textile art and craft, this may have been a coincidence, but aligns beautifully with the textile industry history of the town. Factories like Bruck’s and the local woolen mills transitioned Wangaratta into an industry town, it’s part of our social fabric.

‘The ground swell around craft practice and textiles in Wangaratta, as early as the 70’s, was the impetus for the well known Wangaratta Stitched Up Festival, a biennial festival that often means the Melbourne to Wangaratta V- line train is booked up for the week. The momentum and success of this festival was the inspiration for the Gallery to hold the award and it hasn’t looked back.

Entries are currently open for the 2021 Wangaratta Contemporary Textile Award.

WCTA is the only award of this kind in Australia. Nolan said that while previously textiles artists often functioned on the periphery, today they have a strong footing in contemporary conversations.

‘I don’t think contemporary textile practice gets enough acknowledgment on its own,’ she told ArtsHub.

‘Many practitioners just exist in the contemporary space. We want to establish a fresh platform where they have the opportunity to be compared with their peers – other artists working in the textile medium in a contemporary way,’ she continued.

Over the history of the Award, Nolan said she had witnessed a shift in the scale of works being made, which has also ‘seen an opening up of ideas and artists’ creativity in delivering works that are more immersive and powerful.’

The gallery removed the size restriction on entries in 2019, which has also made the exhibition ‘less busy’, with fewer works making the finalist exhibition.

Nolan said the controversial move had received some push back within the textiles community but believes it has also made the Award ‘step up’ – resulting in ambitious and dynamic artworks.

‘When there were too many works shown, you couldn’t see the quality. While it is getting harder to get into the Award with each edition, that also means the prestige and reputation of the prize is growing,’ she added.

Nolan cited the work of recent finalist Ashlee Lang who presented an Australian flag, covered with expressive line work of white-out all over it. ‘Whether it was viewed as textile art or not, the artist engaged the textile medium for what he wanted to express.’

‘The collection is very diverse; it stretches across artists like Liz Williamson, who really know their game, to other less known artists, yet that is what is exciting about the diversity of the collection and the Award, it’s what keeps it fresh, and encourages artists in their practice.

‘It’s definitely a Wangaratta thing, we own contemporary textiles, we are a textile city and we want to see the award grow, maintain its diversity and controversy,’ Nolan concluded.

Nolan said that the last thing the selection panel considers is an artists’ C.V.

‘Images are everything. That is what it comes down to. The panel review the images supplied – they are what tells us the story of the work – so make sure your work is photographed well and of reasonably high resolution.’

She continued: ‘We try to make it really clear in the conditions of entry, which is based on (and updated each edition) questions we have been asked by artists, and what we have observed.’

Nolan said the part that artists find most difficult is writing their Artist’s Statement. ‘This give us a sense of how far down the path they are in their professional practice … so being confident about what your work is about is also important.’

The finalists are selected by a panel, which the Award is chosen by a guest judge, all finalists works are considered for acquisition.

Apply for the 2021 edition of the Award.