Nature has been quietly knocking at our door for some time and is now getting impatient. A new exhibition at Blue Mountains Cultural Centre engages artists in the art of planetary health.
Gina Fairley 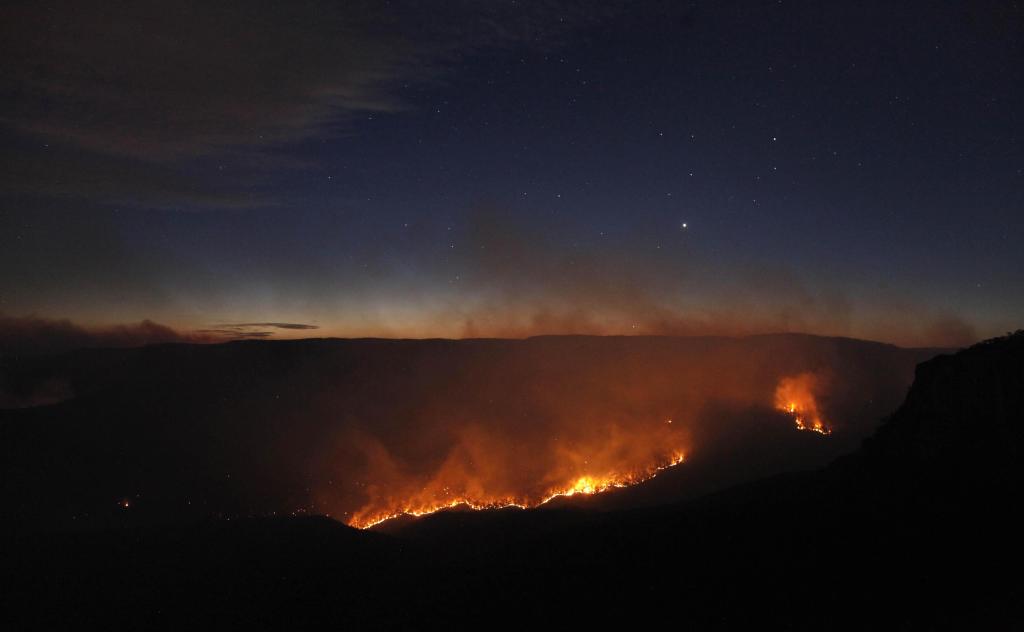 ‘Scientists warn that we have entered the era of the Anthropocene, a period characterised by humanity’s irreversible impact on Earth’s systems,’ writes curator Sabrina Roesner.

It is a believable reality, given that the world was witness to the Black Summer fires of 2019-20, when Blue Mountains residents felt the direct impact of the effects of climate change.

Ecologists fear that more than 80% of the World Heritage-listed area outside of Sydney, was destroyed during the fires. It is a devastating statistic that sits at the heart of Roesner’s exhibition, critical mass: the art of planetary health, which opens at the Blue Mountains Cultural Centre, 3 October – 6 December.

But this is more than a suite of impact-related artworks. Roesner draws our attention to the 2030 Agenda for Sustainable Development, adopted by 193 UN member states in September 2015 – almost five years ago to the day.

‘Within this context the science of Planetary Health emerged, a cross-disciplinary field of study that examines the relationships between ecological, economic and social change, exploring new modes of living needed to restore and stabilise our planet,’ explains Roesner.

critical mass uses art to highlight those key principles, and to reflect on social and environmental changes facing Australia through the work of 18 artists, moving from a macro national lens and historical greats, such as Russel Drysdale and Sidney Nolan, to a micro local one of ground zero.

The exhibition signifies a new partnership between Blue Mountains City Council, Western Sydney University and the Monash Sustainability Unit, to position the Blue Mountains region as a centre for implementing Planetary Health principles.

‘Whether social activists or traditional owners, these artists provide reflections on eco-anxiety, yet remain hopeful for the future state of the world,’ Roesner said.

Through creative responses, these artists examine the roles that traditional knowledge, technology, science and human ingenuity can, and must, play in stabilising our environment and developing a more equitable society, she continued.

Take, for example, the work of locally-based Heidi Axelsen and Hugo Moline, who’s installation DRAWNONWARD (2020) demarcates a small territory of white flags in the gallery, what Axelsen describes as, ‘a little United Nations of dirtbags.’

It is a ‘comment on our constant need to claim and own the land we live on,’ she continued. ‘[But] unlike the flags of human nations these flags are designed to decompose.’

The seeds they hold within ‘have been gathered from roadside weeds, species which claim leftover terrain, species which will be the first to take over after our departure.’

She told ArtsHub: ‘On the surface, these white flags could be perceived as gestures of surrender, resigned to the failure of humanity and giving way to life beyond our own… If we are going to start anywhere, first of all we need to listen to the experts; the scientists and the Indigenous people who study and deeply understand natures systems.’

Nature has been quietly knocking at our door for some time and is now getting impatient.

Hugo Moline, who collaborates with Axelsen, added: ‘The only way we can get out of the mess we are in, towards something better, is to realise how connected we all already are, how dependent we are on each other.

‘That is what we like to do in our practice. To consider other ways we could arrange the world, that serve to highlight contradictions in the way we organise it now. These scenarios, such as people devoting their lives to serve plants, seem on the surface a bit ridiculous, but considering how important plants are for our survival, maybe not so ridiculous after all?’ Moline said. 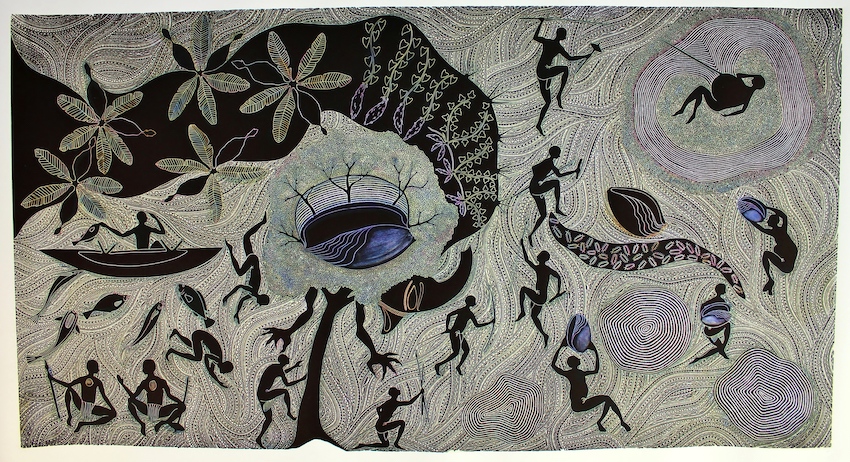 Taking a different approach, but still focused on the importance of plant ecology and planetary health, photographers Dean Sewell (pictured top) and Andrew Merry remind us of the raging fires that engulfed the Blue Mountains from three sides.

Their dramatic visual records appeared in the Sydney Morning Herald, BBC, ABC and The Guardian, capturing the attention of the world.

These works encourage the increasing discussions around bushfire prevention by turning towards the knowledge and practices of traditional owners, who have managed Country through cultural burning for millennia. 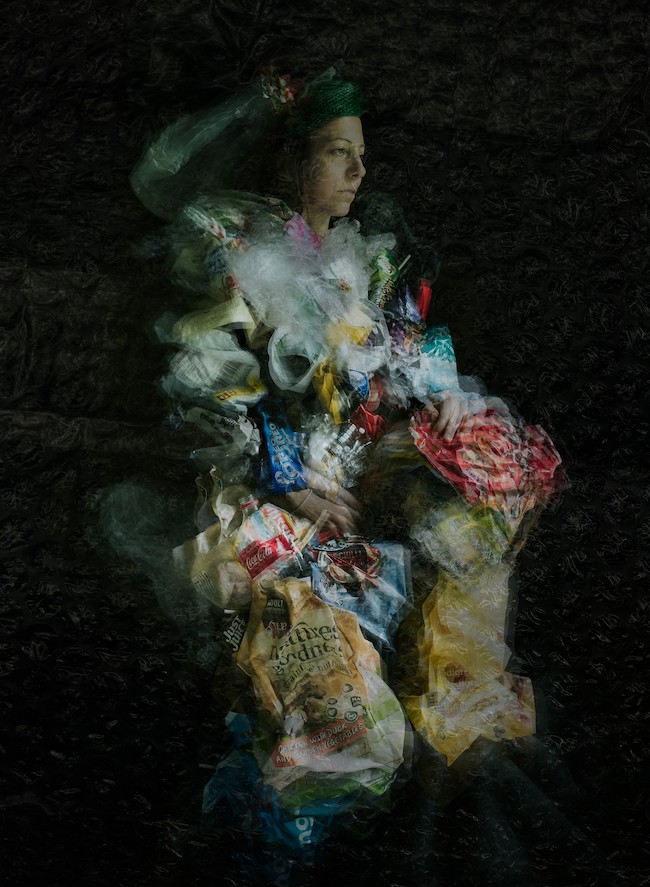 Photographer Ona Janzen departs from nature rather looking at the cause; collected plastic products from her regular shopping for two weeks.

Australia generates close to 70 million tons of rubbish each year. Household waste alone accounts for 540kg of waste per person annually, and single use packaging plays a big part in the increasing production of rubbish (according to the Department of the Environment and Energy, 2018).

Janzen’s work, Two weeks self-portrait (2018), shows the artist covered in layers of accumulated household rubbish. ‘It speaks powerfully to the part that we each play in the over consumption and production of waste,’ says Roesner.

Overall, critical mass: the art of planetary health is an exhibition that uses poignant beauty, stillness and humanity to probe the big questions from the individual. It is not about placard politics; it is about innovation and solution-based thinking.

Roesner reminds us that the COVID-19 pandemic has precipitated fundamental changes to the ways we live and interact.

‘As we are forced to re-assess and re-evaluate the systems that we have built and relied upon for so long, we may find opportunities within the challenges that we currently face and create more sustainable and holistic ways to inhabit planet Earth,’ Roesner said.

The artworks she brings together for this exhibition speak of holistic and collaborative actions towards one goal: a more sustainable future via a healthy planet – an no-one is denied a role.

Axelsen put it simply to ArtsHub: ‘Nature has been quietly knocking at our door for some time and is now getting impatient, throwing flames and viruses as we aren’t listening. Why do we find it so hard to listen?

critical mass: the art of planetary health will be presented by the Blue Mountains Cultural Centre from 3 October – 6 December 2020.