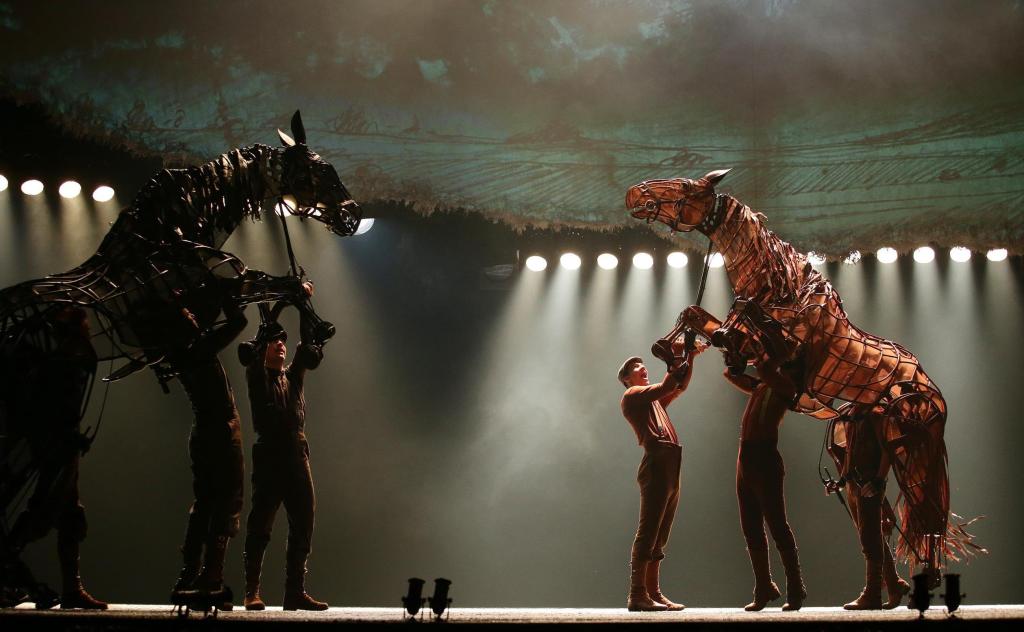 So many acres of trees and reels of celluloid have been devoted to the death and destruction of humans in war, but there has never been anywhere near enough attention paid to the sacrifice of animals in the devastation wrought by men. War Horse reminds us of the importance of these creatures enlisted on the battlefields. The production makes its return after first touring Australia in 2012-13.

Based on the 1982 novel by Michael Morpurgo, National Theatre of Great Britain’s multi-award winning show is characterised most of all by the life-size puppets by South Africa’s Handspring Puppet Company. Once you get over your initial marvel at the sheer mechanics of the troupe’s handiwork of cane and plywood, there is an easy suspension of disbelief, even though the handlers (three per horse) are clearly visible and there is no attempt to hide them. A kind of theatrical magic happens and you start to see the horses as real, live, cantering beasts clattering across the stage. Part of this transportative magic is due to the level of attention of the skilful puppeteers: the swishing of the tails, the harrumphing, and the hooves stamping are all closely observed.

The story is a simple one that gets a little bit muddy as the show progresses. At the start of WWI, Joey, the beloved horse of Albert (Scott Miller), whom the boy raised from a foal in Devon farmland, is sold to the cavalry by his impetuous dad and shipped from England to France. Despite Albert being told the contrary, Joey does not return after a few months’ service and a distraught Albert runs away, vowing to bring him back.

Though it was adapted from a book for children, the horrors and bloodshed of war are not sanitised (so parents beware, if planning to take the young ones along). Aside from the craftmanship of the horses, the theatrical dramatics of War Horse are most effective in their rendering of the sound and fury of battle: the use of strobe lighting and noise and shadow and machine-gun blasts, of barbed wire, smoke, confusion, and slain men and beasts.

Some quibbles though: despite the fact that you do, like Albert, become emotionally invested in a horse, the sentimentality does become a bit mawkish and laid on a tad thick, and when Joey gets passed from French to German troops, the lack of communication between them is awkwardly expressed (as there are no subtitles deployed, everyone just speaks in default English and there’s a pretence of not understanding what the other is saying). In the second half the action palls a little, particularly when Joey and his fellow horse Topthorn aren’t actually the focal point and it’s the derring-do of the humans we are asked to care about instead. The show could be trimmed a little without losing overall impact.

At its heart, it’s a love story: the sustained, unbreakable bond between a boy and his lifelong equine companion despite enduring separation in the direst of circumstances. That really, is the take home message of War Horse.

Sydney from 15 February
Perth from 24 March