Tosca was a box office success from the start, first performed in 1900 in Rome. This production promises that success yet again.
Gina Fairley 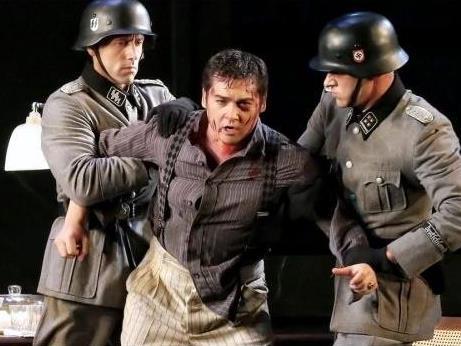 A piece of performance themed around Nazi occupation hardly ​floats my boat, but then this is no regular portrayal of an ancient war dosed up with bitter nostalgia. Rather, one could translate those Nazi overtones to modern day Turkey or Syria where veiled dictators “remove” artists and the intelligentsia from society. We might even go so far as to find resonance with our own political situation in Australia, where the value of artists has been under attack with persistent cutbacks.

Ok – let’s not get so dramatic. The point is that Tosca connects and inspires audiences; it has a timelessness that is again apparent this month.

John Bell’s overlay of Puccini’s dramatic Napoleonic masterpiece with tones of Nazi occupation set an impressive benchmark when it premiered in 2013. Four years later and that impact is just as strong in this revival by Roger Press. I would go so far as to say it is the jewel in this year’s season for Opera Australia.

The curtain rose on an incredible recreation of a Roman basilica – its proportions only matched by the enormous voice of Romanian tenor Teodor Ilincai – welcoming audiences into an exquisitely constructed world designed by Michael Scott-Mitchell.

Moving from that Baroque opulence of Act I, Scott-Mitchell delivers us into the stark world of Nazi Germany with Act II. The contrast heightens the narrative; framed by red Nazi banners, the stage becomes an ominous boardroom and the scene of war crimes.

Puccini wrote in 1907: ‘I don’t believe I could write anything other than opera. I love the dramatic – the theatric, even.’

Tosca delivers with dramatic explosion at every point. Ilincai, as Cavaradossi, launches into Recondita armonia (Hidden harmony) in the first Act with incredible penetrating power, soon followed by the duet Non la sospiri la nostra casetta (Do you not long for our little house) with Spanish soprano Ainhoa Arteta, setting the tone.

Tosca is a heroine-dominated opera, and Arterta has no difficulty in pulling off the complex dramatic role. She moves from sweet seduction and a lover’s jealously with Cavaradossi, to victim and manipulator in the face of police chief, Scarpia (Lucio Gallo), her vocal range and nuance shaping her character perfectly. 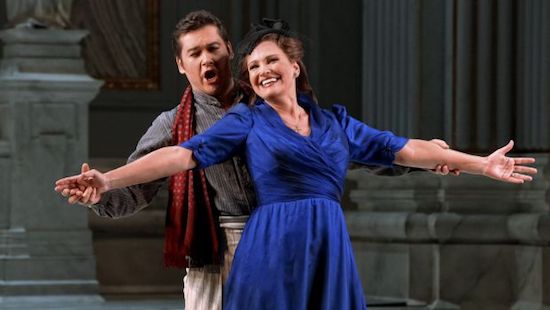 Those first impressions were deepened with strong performances by Luke Gabbedy as the mildly comic sacristan and Richard Anderson as the recently escaped Angelotti, bringing a heroic tone with his bass and excellent strength in the chorus.

But an opera is not complete without a villain. Entre Gallo as the menacing Scarpia – you can’t help but dislike him. His firm baritone voice is foreboding and unfaltering as he holds Tosca, telling her how he prefers to “conquer” women rather than romance them – a sick kind of aphrodisiac. But Tosca is strong and plays to that weakness of Scarpia’s.

Gallo’s delivery of Te Deum at the end of Act I held its place against the strengths of Ilincai and Arteta. In fact it was a rather tight-knit trio – Arteta had a superb rapport with both Gallo and Ilincai – a deserved nod to great casting.

Love and possession form an interesting checkmate in this opera. Tosca uses her sex as a powerful tool against both men; Scarpia plays a more sinister game where jealousy is but a mouse to a cat’s paw.

The tragedy in a nutshell: determined to possess Tosca, Scarpia fuels her jealously in order to smoke out Angelotti from hiding. Cavardossi – who has helped Angelotti – is quickly captured and tortured by Scarpia. Tosca promises herself to Scarpia if he will save Cavardossi from execution. He agrees and signs orders to that effect, and then Tosca brutally takes to the chief with a knife. It is a bloody theme of contempt where music and drama meet and Tosca caps if off by draping one of the red Nazi flags over Scarpia before spitting on him.

But this “fake” execution is Scarpia’s last play from the grave. In the final Act Tosca watches as Cavardossi is killed and offers her own life to the firing squad – a stark scene with her arms raised and doused in light. She is a bug in the headlights, devoid of hope.

Some of the vocal highs – Illincai’s Act III solo E lucevan le stele (and the stars shone) with its line “and never have I loved life so much” is a show-stopper, perhaps matched by O lucevan le stele where he describes his love of life, knowing it is about to end.

As for Tosca, her impassioned plea, Vissi d’arte (I lived for art) had audiences transfixed – a moment when she ponders the role she plays in this unfolding nightmare.

OA has been rolling out the revised favourites this season (King Roger aside) but wrapping up the season, Tosca is luminous.

Bell says in his Director’s notes: ‘Placing the opera in a more contemporary context than is usual will force all of us involved in staging it to reassess the events that take place and the people who enact them.’ Too true.

Tosca was a box office success from the start, first performed in 1900 in Rome. This production promises that success yet again.