THEATRE REVIEW: This Is Our Youth

This Is Our Youth is playing in Melbourne at Fortyfivedownstairs. The plot is simple. Set in New York during the Reagan administration, (early 1980’s) we watch three young seemingly hopeless people try to decipher their place amongst themselves and in the “big picture” that is life.
Rita Dimasi 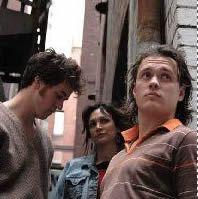 This Is Our Youth is a play by Kenneth Lonergan.

Kenneth Lonergan is a playwright, screenwriter and director, and a successful one at that. He wrote and directed You Can Count On Me, which won a series of awards including the Sundance 2000 Grand Jury Prize. He also co-wrote the Gangs Of New York.

And now This Is Our Youth is playing in Melbourne at Fortyfivedownstairs.

Seen as a play for the young emerging talent, it was originally performed in 1996 with Mark Rosenthal, Mark Ruffalo and Missy Yager, and has subsequently seen young up-and-comers such as Matt Damon, Colin Hanks, Chris Klein, Jake Gyllenhaal, Casey Affleck, Anna Paquin and Summer Phoenix perform in this three-character profile.

The plot is simple. Set in New York during the Reagan administration, (early 1980’s) we watch three young seemingly hopeless people try to decipher their place amongst themselves and in the “big picture” that is life.

We are in Dennis Ziegler’s apartment on the Upper West Side of Manhattan. His friend Warren Straub (a woeful young man with puppy dog eyes), arrives unexpectedly with a large sum of stolen money, looking for a place to stay. Dennis a drug selling and drug taking aficionado is both enthralled and appalled by this predicament and its many possibilities. And when young fashion student Jessica Goldman drops by, a previously hapless Warren becomes singularly enraptured by the potential seduction of this young woman.

The title of This Is Our Youth is a pretty good place to start when looking to deconstruct the play’s themes. Yes it’s all about adolescent issues of identity, place, class and morality. Interestingly it seems as if Dennis, Warren and Jessica all come from well off middle class families in New York (Warren’s father is a lingerie tycoon), and so their disconnection is not necessarily to be blamed on lack of opportunity, but is perhaps a jab at an era when the popularity of Reaganism saw a leaning towards traditional middle class politics and a distancing from the tolerance that liberilism represented.

This Australian production of This Is Our Youth, sees three young and up-and-coming actors of our own take on the major roles. Nicole da Silva (Logie nominee) Ben Geurens (Home & Away) and Ashley Zukerman (recently seen in the MTC’s The Hypocrite).

Directed by Nicholas Pollock, this is a two act play that works hard to take the audience inside the minds of these three young adults – an ongoing symbol of the next generation.

It also is spoken in a strong New Yorker accent. I have to admit, I normally flinch when I realise I will be spending two hours with a potentially wavering accent, however in this instance I was pleasantly surprised. Dialect coach Jenny Kent must surely be very happy because all three actors performed their accents most convincingly, allowing even greater insight into who these characters were and where they came from.

In fact the three young actors’ performance was overall very strong indeed. The scenes where Jessica and Warren meet and carefully tip toe around their attraction to each other works particularly well, and da Silva produces a wonderful damaged young woman – both smart and needy. The more “boyyoh” scenes between Dennis and Warren did seem sometimes too loud and too theatrical and too irritating. They reminded me of my own undergraduate days – where young men made lame jokes in loud voices so everyone would notice them – but perhaps that was the point.