A suspenseful and powerful new work about the repatriation of Aboriginal and Torres Strait Islander remains.
Reuben Liversidge 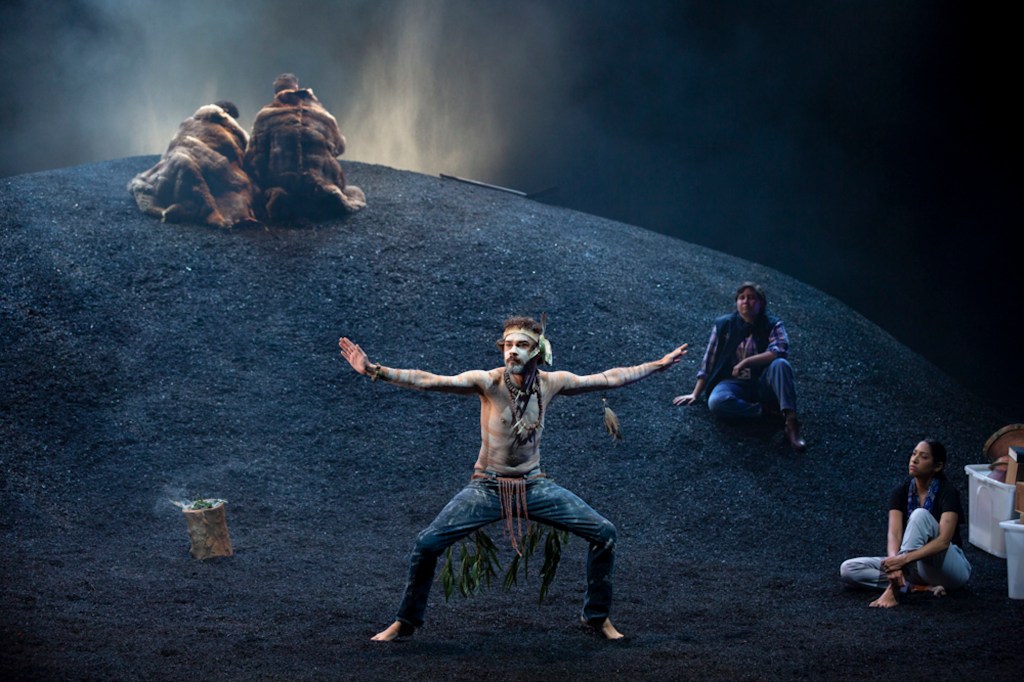 ‘The Return is one of the most technically assured productions that Malthouse have produced to date.’ Photo by Pia Johnson.

A man and woman huddle with their infant child around a small fire on the banks of a river. The man hears an animal nearby and goes to investigate. Suddenly, a stranger in a stark white lab coat strides on stage and promptly removes the child from its mother’s clutch. Death and destruction swiftly ensue.

These are the opening moments of The Return, a powerful new play written by John Harvey and co-presented by Malthouse Theatre and RISING.

This devastating scene will be played out again throughout the course of this epic and confronting piece of theatre, which exposes the darkest parts of our nation’s history by exploring the repatriation of remains and artefacts of Aboriginal and Torres Strait Islander peoples.

The playwright centres this epic tale around the fictional ‘Museum of Origins’. The Curator (Laila Thaker) oversees day-to-day operations, including wrangling the real-life ‘exhibits’ who stand atop white plinths and offer advice to a wide-eyed newcomer played by Guy Simon.

The Return initially has moments of lightness and humour: Ghenoa Gela’s character lusts after Jimi Bani’s ‘warrior’ and the latter plays a caricatured douchebag photographer in charge of a culturally insensitive photoshoot. But as Simon’s protagonist starts to realise that something disturbing lies behind the museum’s glossy facade, the tone becomes much darker and tense. The past begins to mingle with the present and the audience is taken on an increasingly harrowing journey involving the desecration of burial sites, the violence of colonisation and the horror of eugenics. We witness a painful cycle of trauma that echoes down through generations. A sense of reprieve only comes once the remains are finally returned to Country in a stirring final theatrical tableau.

Every technical element of the production, co-directed by Jason Tamiru and Matthew Lutton, from design to costume to sound, is flawless. Zoë Atkinson’s set features a monolithic central pile of black dirt surrounded by a functioning train track. Small boxcars and the aforementioned plinths float across the stage on the tracks and at one point bones are literally unearthed on stage. It’s quite an achievement.

The sound design and compositions by Jethro Woodward are incredibly effective and essential in achieving the slow burn tension that permeates the play. The soundscape soothes with natural elements – the gentle bubble of a calm river or the call of a crow – before jolting you with bursts of static, deep bass rumbles and even the disturbing cracking of bones. In conjunction with the wonderful acting ensemble, all these elements coalesce to create a compelling and intense experience. At times it feels like you’re in the middle of a modern, elevated horror film such as Hereditary or Get Out; there’s a similarly disturbing dreamlike quality to The Return.

The material must be extremely challenging for the performers, but they rise to the occasion admirably. Most of the cast each play several different characters and their quick changes are handled with flair. Simon anchors the ensemble with a galvanising performance that sometimes runs the risk of becoming histrionic, but ultimately straddles the line with finesse. Gela’s physicality is extraordinary throughout, and Bani has a warm presence and great comic timing.

The rest of the performances are mixed, with some differing styles clashing against each other. There also could have been a bit more selective editing at the script writing stage to eliminate some of the unnecessary repeated emotional beats and plot points. However, the team skilfully keep the complicated plot threads and timelines clear throughout.

The Return is one of the most technically assured productions that Malthouse have produced to date. But more importantly, this is highly potent and vital theatre that forces the audience to reckon with one of the most shameful chapters of our past.

The Return by John Harvey
The Merlyn Theatre, Malthouse
Presented by Malthouse Theatre and RISING

The Return will be performed until 4 June 2022