A love song to the power of community by the late Aidan Fennessy.
Thuy On 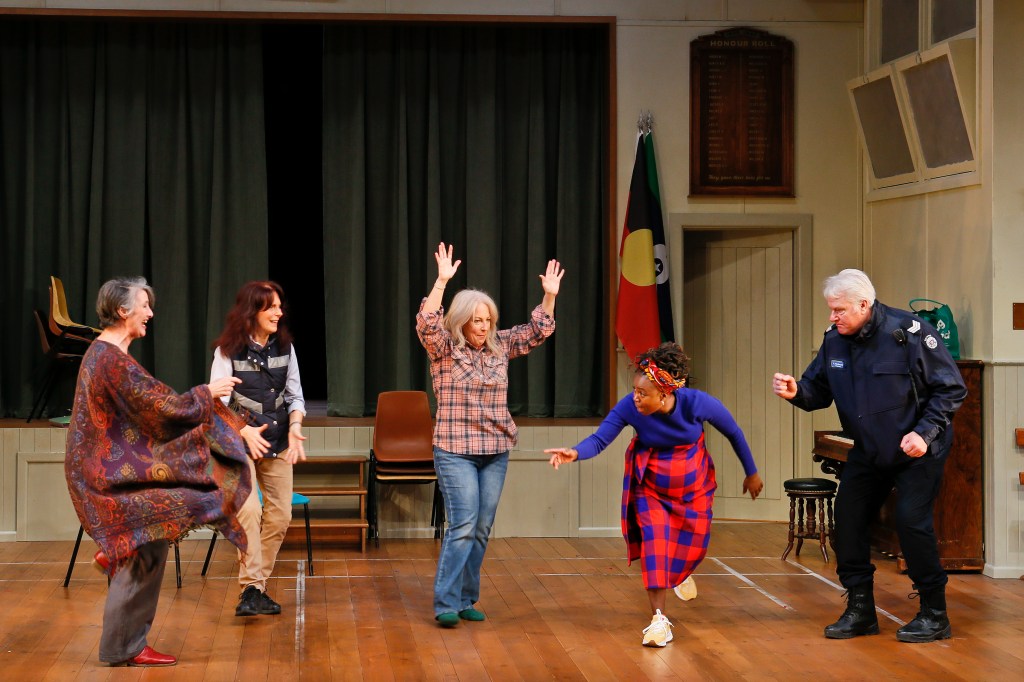 ‘The Heartbreak Choir is about big voices, small town politics, and a collective desire to be and do good.’ Photo by Jeff Busby.

Directed by Peter Houghton with a fine sense of pacing and drama, the entire action of The Heartbreak Choir is set within a lovingly recreated Country Fire Association hall in an Australian country town (complete with old piano, recalcitrant wall heater, and a painting of Queen Elizabeth II). Here, five women of varying ages and backgrounds assemble on a semi-regular basis to share food, give bulletin updates of their lives and to rehearse. Their voices reverberate within the draughty surrounds, at once colouring its nondescript walls with the silliness of their vocal exercises and the vibrancy of their harmonies.

For reasons that will duly be made clear, this splinter group has broken away from the main choir that performs at the Catholic church and decided to form their own unit, led by choirmaster and psychologist ‘Care Bear’ Barbara (Maude Davey). There’s Mack (Carita Farrer Spencer) and her daughter Savannah (Emily Milledge), one as loud and rambunctious as the other is quiet and introverted; heavily pregnant Zimbabewan-born Aseni (Ratidzo Mambo), a doctor working at a deli until her credentials are recognised; and rich but rough-edged Totty (Louise Siversen).

The choristers are here to connect, and as one of their songs puts it, if you sing about your troubles it might just pass: art as therapy has a long tradition after all. The characters in this ensemble act are warmly embraced by the respective actors, all of whom have rich, strong, mellifluous voices that flow in and out of each other’s a cappella renditions. If, at times a couple leaned a bit too heavily into their over-the-top personas, it’s a forgivable result of their obvious enthusiasm and affection for their roles. The humour here is broad strokes rather than finely nuanced.

The collective bursts of song are seamlessly integrated into the storytelling. It wasn’t too long ago that concerts and gigs of all descriptions were banned due to COVID-led dictums so the very act of watching full-throated singing on stage was a joy to behold.

The subsequent entry of Peter, the town’s burly but sensitive policeman (a delightfully awkward William McInnes), into their fold and the release of a secret about his wife, also an original choir member, threaten to stain this play with a darker hue. But while there is pain and a moral prerogative behind the reason for The Heartbreak Choir’s creation, and hence a heavy undertow, ultimately playwright Aidan Fennessy – who sadly died in 2020 while the play was still in development – aims for a narrative trajectory with an uplifting momentum. An act towards the end that provokes an ethical dilemma and realistically could have had more punitive aftershocks, is peremptorily glossed over.

The Heartbreak Choir is about big voices, small town politics, and a collective desire to be and do good: for each other and for the greater community. Joy and grief are braided in a play that’s so quintessentially Australian: in its setting, its Strine dialogue, its ribald humour and gossip and easy camaraderie. (Look out for Peter’s footy-related audition that won him choir approval.) It is both heartbreaking and heartwarming.

It’s also the final note by Fennessy, who died without having seen his words performed on the stage. It seems apposite that a play about the importance of nurturing connections and the transportative power of art should be his concluding legacy to Australian playwriting.

The Heartbreak Choir will be performed until 28 May 2022