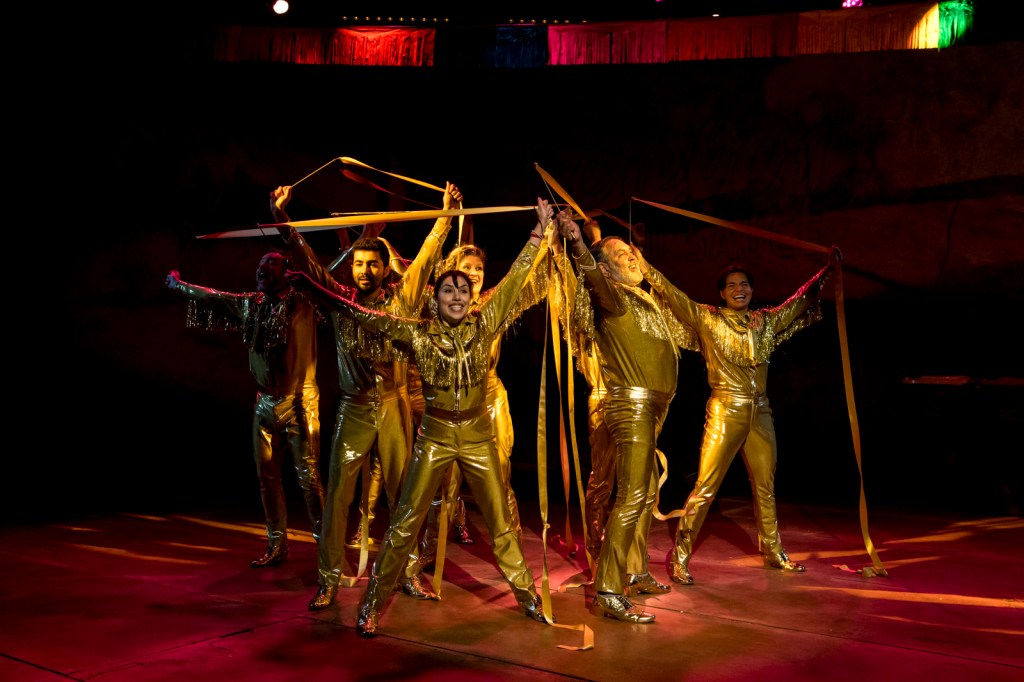 Boomkak, population 1734, is a town in rural New South Wales. To repel the Big Developer’s rapacious plans to destroy its heritage and small town charm, the locals decide to put on a panto. The putative justification for this is to raise money to pay for lawyers but, as the show frankly acknowledges, none of this withstands close scrutiny. Nor does it matter. The plot of the show serves the simple function of providing a frame for the pantomime.

This is, in other words, a panto about panto but without any of the pretension that might suggest. The meta jokes are genuinely entertaining rather than coming across as too knowing. Virginia Gay wrote the show and co-directs with Richard Carroll and the show buzzes with her irreverent love for panto and theatre in general. Early on, her character Alison vents a great potpourri of grievances with the medium of pantomime itself which might have been too clever by half if it weren’t also hilarious. In fact it is hard to overstate how funny the entire thing is.  It is very camp and very silly and I was wiping away tears of laughter by the intermission.

If there is to be a criticism of the show it may be that it loses some momentum in the second half as the rapid-fire jokes give way to some more sentimental moments. Having said that, the show never descends into schmaltz, or at least, not the bad kind. It is still panto, after all, and Act II still contains a singalong rendition of ‘Am I Ever Gonna See Your Face Again?’

The entire thing is incredible fun and the cast is uniformly excellent. Rob Johnson gets a lot of the best lines in his dual roles as the Big Developer and Butch, the latter being Zoe Terakes’ character’s rival for Yazmin, played by Mary Soudi. Billy McPherson has great gravitas and charisma as Darren, Toby Truslove is hilarious as John, a retired F-list actor learning to make his way through the panto canon. Deborah Galanos is great as Yazmin’s mother Parnia and Virginia Gay is, unsurprisingly, excellent as Alison. There really are no weak links.

There is a risk in over-analysing something as joyfully exuberant as this show. To crib a line from Stephen Fry (describing the similarly exuberant prose of PG Wodehouse), ‘you don’t analyse such sunlit perfection, you just bask in its warmth and splendour’. There is plenty of warmth and splendour here and it earned its opening night standing ovation. As the Big Developer says in one of the show’s many fourth-wall breaking moments, ‘theatre’s back!’

The Boomkak Panto will be performed until 23 December 2021