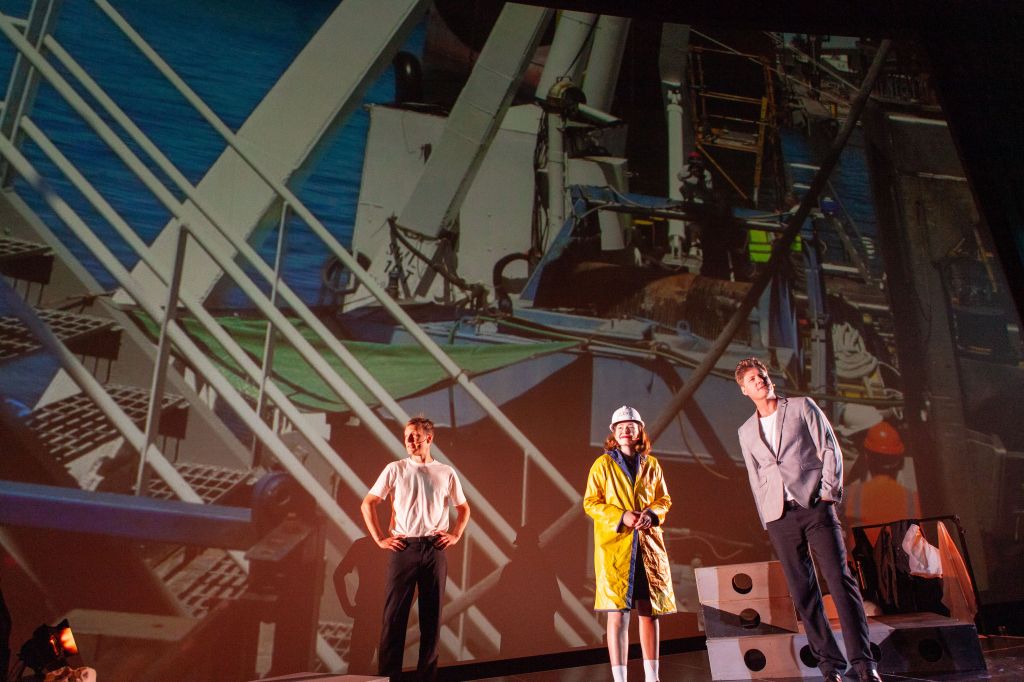 ‘At times, the figures and images on screen are overpowering; yet expertly balanced lighting design directs audience attention to either the actors on stage, to the screen, or to shifting quickly between both mediums.’ Photo by Stewart Thorpe Photography.

Sydney II: Lost and Found, produced by the impressive Western Australian company, THEATRE 180, offers an immersive theatrical experience in a cinema setting. Playwright Jenny Davis has excelled in interweaving the story of the loss of 645 souls on board the naval warship HMAS Sydney II following a battle with the German raider HSK Kormoran in 1941, with the search and discovery of the shipwreck off the coast of Western Australia in 2008. The production explores themes of love and family, war and loss, search and discovery, through meticulous research, consummate writing, and with expert artistry; a timely and soulful contribution to the 80th anniversary commemorations of Australia’s greatest maritime disaster.

THEATRE 180 has realised their ambition of ‘Great Stories, Well Told’ in their hybrid artform, CinemaStage, offering the immediacy of live performance integrated with documentary, archival footage and stunning cinematography projected on screen. THEATRE 180 transitioned from Agelink Theatre in 2019 and ‘draws its name from the stories of our lives across a 180-degree perspective, from our buoyant youth to the wisdom of age’. The Company has continued to draw on oral and recorded histories to generate contemporary theatre and is a proud finalist for the 2021 Western Australian Heritage Award in the category of Community-based Organisation.

Sydney II: Lost and Found is the second CinemaStage production by THEATRE 180, after the successful premiere adaption of A.B. Facey’s A Fortunate Life by Jenny Davis and Stuart Halusz in early 2020. Davis was inspired to write Sydney II: Lost and Found while watching the screening of a video documentary, The Hunt for the HMAS Sydney. The image of a boot on the bottom of the ocean captured the imagination of Davis who ‘was immediately taken with the ideas of it sitting centre stage, and of the ghost of a young sailor at the end of a play coming forward to claim it, since with the discovery the ghosts could now be laid to rest’ (Davis, 2021). At the screening, Davis met Ellen Underwood and learned that her father, Abel Seaman Allan Rowe had perished on the HMAS Sydney II, eight months before her birth. Davis saw the potential for a wartime love story entwined with the disappearance of the vessel and later, the search and recovery of the shipwreck.

Director Stuart Halusz expertly responds to the complexities of the script and to the nuanced elements of the playwright’s vision. The story begins and ends with Ellen’s voice, framing the historical narrative and offering insight into the human cost of war. The story of Allan’s courtship then marriage to Jessie is delightfully played out by actors, Tom O’Sullivan and Morgan Dukes, with Myles Pollard relishing his role as Jessie’s father. The three actors perform on a raised stage in front of a cinema screen for the duration of the performance, changing costumes side-stage and moving props and sets for narrative clarity and dramatic effect.

The sheer size of the screen dominates the space. At times, the figures and images on screen are overpowering; yet expertly balanced lighting design directs audience attention to either the actors on stage, to the screen, or to shifting quickly between both mediums. Visual Designer Mike Paget notes the main challenge combining live actors with film is ‘timing … you can compile footage, but you don’t know how it’s going to work until you get on stage.’ The strengths of the genre are highlighted in moments where the actors interact seamlessly with the projected images, and when focus is thrown to the cinematography. Aerial shots of the ocean, underwater footage of the shipwreck, archival material, photographs, and panoramic sweeps of scenic locations are enhanced through vibrant colour grading and with cinematic surround sound: a breath-taking, mesmeric theatrical experience.

Halusz believes in the ‘power of culture and the arts to transform, educate and enlighten’ and with the CinemaStage genre, THEATRE 180 has significantly broadened opportunities for reaching new audiences and touring to regional and remote locations. The Company has generated comprehensive educational packages which include specific curriculum links for secondary school students studying English, Drama, Humanities and Social Sciences. In the volatile and unpredictable age of the global pandemic, CinemaStage allows for financially viable touring with workshops and artists’ talks to ensure exceptional performance and educational opportunities for people of all ages, wherever they may live.