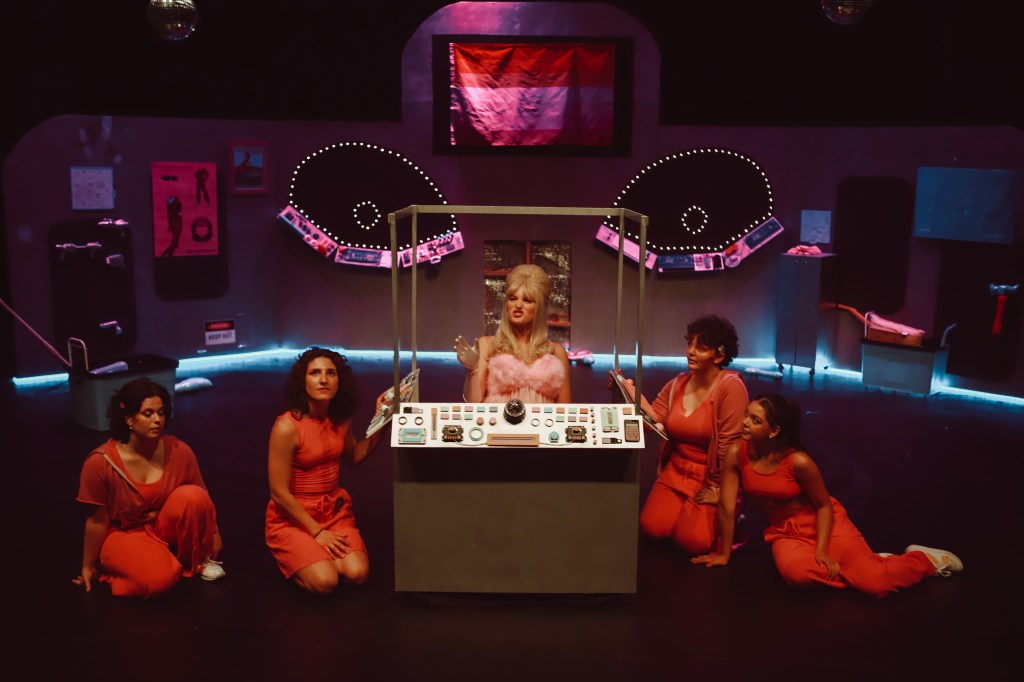 ‘The most accomplished part of the show is the set itself; an ode to kitsch, low-budget 70s sci-fi with a distinctly queer, feminist bent.’ Photo supplied.

Surely we’ve all thought about it. The patriarchy is destroying the planet and poisoning womankind’s’ self-worth so maybe it’s time to start a new world without men?

In SLUTNIK™, we meet a group of five lesbian separatists on a funky DIY spaceship who are ready to do just that. But before they take off, they’ve got to learn how to teach Motherboard, the ship’s Bond-girlesque super computer about the vagaries of queer female culture.

The show kicks off with a bang as the ‘sluts’ of SLUTNIK™, dressed in party pink take to the stage for a high energy, smutty dance performance. To demonstrate her new knowledge, Motherboard gives a TED talk about 18 different ways humankind can now create a baby with new medical technology. The ‘sluts’ reply with an inspired demonstration of a faked female orgasm. In what must be a thoroughly irritating development for the rest of the crew, two of the ‘sluts’ start a passionate lesbian romance, culminating in an impromptu poetry slam.

The script suffers from the age-old problem of too much telling and not enough showing, as the cast are tasked with delivering long monologues and technical info dumps.

The ‘sluts’ frantically discuss everything from the side-effects of being on the pill, whether straight women can really be trusted and the limits of lesbian identity in today’s multi-gender world. For the most part, the audience is simply peppered with political concepts and buzzwords without time for the audience to digest what it all means.

A notable exception to this was a moving monologue delivered by one of the ‘sluts’ about the pain of endometriosis and the medical establishment’s institutional gas lighting of people who are unlucky enough to live with this condition.

The most accomplished part of the show is the set itself; an ode to kitsch, low-budget 70s sci-fi with a distinctly queer, feminist bent. Creepy, red-lit interludes where the ‘sluts’ apparently consume the flesh of their male oppressors make for some eerie, haunted-house style fun too. The all-pink costumes were appealing, if a far cry from the usual attire of actual lesbian separatists who created women-only communes in the 70s.

At times, the stage direction suffered too much zaniness for the sake of zaniness. The vegetables resembling male genitalia thrown on stage throughout the show added little in the way of plot development or humour.

The plot, to put it mildly, is confusing. But if you don’t worry too much about the detail (what was going on with that water purification project and the ultimate deception?) there’s a lot to like in this show.

The all-woman cast delivered an upbeat, joyous performance, and it was a real pleasure to see a sex-positive show revelling in the minutia of queer female culture. The actor playing Motherboard did an excellent job and delivered most of the show’s laughs.

The writer has covered some important topics in SLUTNIK™, including the effects of catastrophic environmental destruction and the neglect of women’s health.  It would be great to see a part two set in an Ursula K Le Guin-style universe where the ‘sluts’ have to grapple with the harder task of building a sustainable feminist utopia.

Sam Elkin (he/him) is a writer and radio maker. Born in England and raised on Noongar land, Sam now lives on unceded Wurundjeri land. Sam's essays have been published in the Griffith Review, Overland and Kill Your Darlings. He is the host of the 3RRR radio show Queer View Mirror and is currently co-editing Nothing to Hide: Voices of Trans and Gender Diverse Australia, which will be published in 2022.