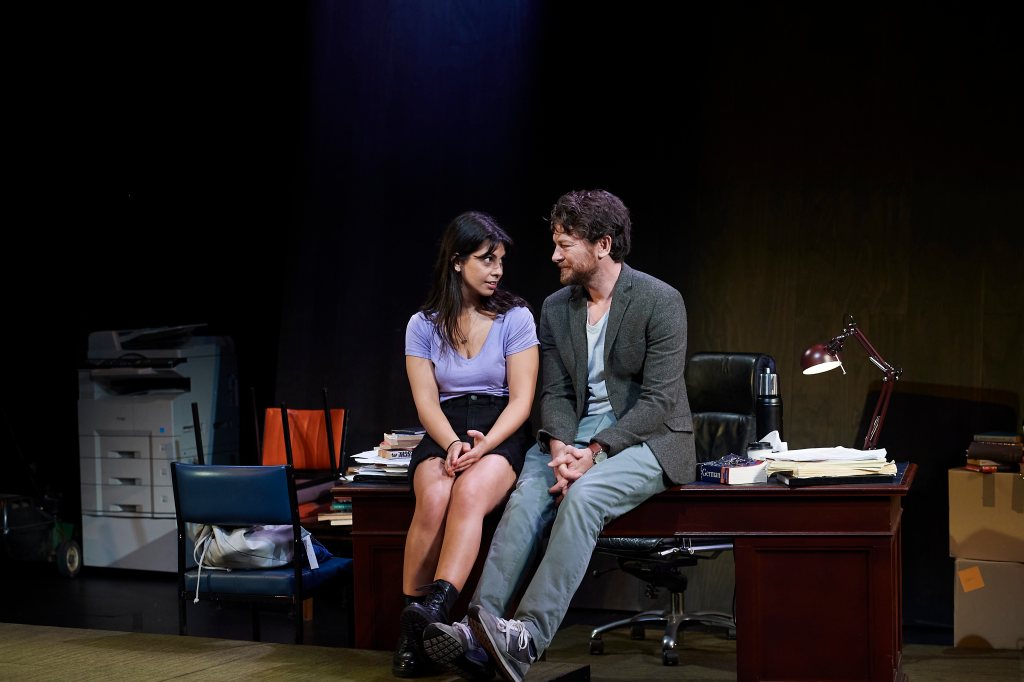 ‘The audience is invited to interpret a messy and complicated relationship,’ Photo by Jaimi Joy.

Sexual Misconduct of the Middle Classes is a gripping and timely drama, with the majority of action carried by Dan Spielman as Jon, a multiply divorced, ethically negligent, hedonistic writer and university professor. The tricky narration works, slipping between Jon speaking in third person about himself, and his advantage-taking activities that occur with his 19-year-old undergraduate student, Annie (Izabella Yena), and then flashing forward to potential consequence.

However uncomfortable and unpalatable Jon’s choices may be, Spielman is fantastically captivating at portraying a certain type of crumpled, charismatic, aging, entitled masculinity that has been complicit with the old school of academia, perpetually excusing himself of culpability.

Yes, it is a #metoo play, but one with an intriguing framing device that only becomes clear toward the end. It’s a snappy 80 minutes containing a (relatively) satisfying revelation. Entanglement and responsibility are the key questions, yet Sexual Misconduct… refrains from the dogmatic, given the nuanced writing of Hannah Moscovitch and the tight direction by Petra Kalive.

Nothing is laboured here, and the audience is invited to interpret a messy and complicated relationship, foregrounding the power dynamic of age and institutional disparity but also allowing room for the agency of Annie and her maturation and burgeoning retrospective view. It’s performed on a sparse, adaptable set, allowing transition from Jon’s university office to hotel, to front lawn and home.

Sexual Misconduct of the Middle Classes deliberately aligns you with the antihero, Jon, then twists you to consider where your sympathies lie. It’s simultaneously welcoming and then challenging to a general audience. Annie, who to begin with is little more than an ingénue cipher in a symbolic red coat – playing out a fantasy of Jon’s – gains in her strength and capacity to challenge this man. It’s a thorny play, sometimes over-reliant on gender stereotypes, but incredibly worthwhile, parsing consent and the idea that there is ever fulfilling, clear-cut resolution to such cases, which may be morally beyond the pale but perhaps not prosecutable.

This play holds a mirror to society’s differing standards for what can (and does) occur between the powerful, and those under their purview. The sandstone academies, corridors of parliament, and other such synonyms for establishment are seldom held to account, and abuses of supervision mostly let off with leniency. This play is not a straightforward ‘he said/she said’ and is all the more important for that complexity.