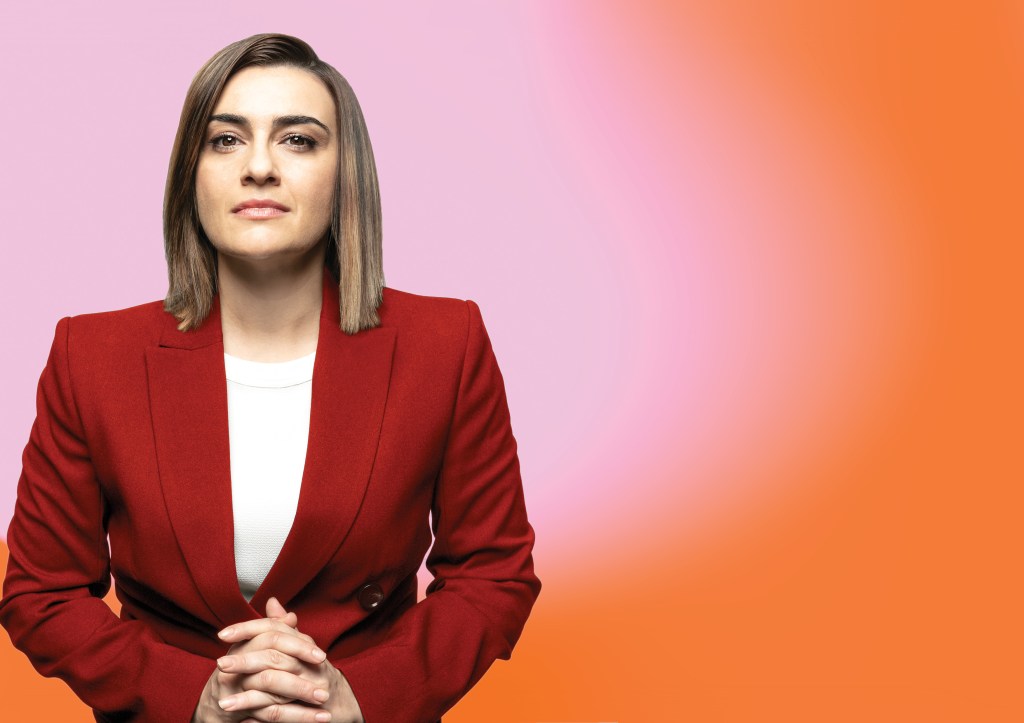 Prima Facie opens with Tessa, a confident, tough and smart 30-something criminal defence lawyer, demonstrating to the audience what it takes to win a case in an Australian court of law. And winning cases is what she does, most successfully as we come to learn, during the course of this 100-minute one-woman show that takes us through a roller-coaster of emotions where Tessa’s faith in the law she upholds is severely tested.

The opening extended metaphor, used to great effect, compares the start of a trial to that of a horse-race; the thoroughbreds all lined up waiting for the starting gun, eager, hungry and champing at the bit. When the gun goes off, the race is on and it is then a sprint to the finish line.

Compared to the stages of a court case, it is a very apt simile. We learn that Tessa, brilliant and ambitious, believes there is no room for emotion in the law, professionally distancing herself from victims, in her ruthless defence of a client.  A highly competent, thoroughly prepared barrister, she appears to know all the tricks of her trade. She works the system by reading and managing the court. She keeps an eye on the Judge and the body language of the prosecution, she controls her client, keeping him (it is nearly always him) in check. In particular, summing up early what makes the witness tick, she exploits vulnerabilities to manage the process, thus successfully influencing a jury to clinch a case. As required, she manipulates, cajoles and finally comes in for the kill, as she reaches that satisfying moment at the finishing line, knowing she has the case in the bag.

This was a wonderful opening to the play, intelligent well-written material from Suzie Miller, beautifully delivered by Sheridan Harbridge as Tessa. It produced laughter yet acceptance from an audience who understood the need of this character to get results. It set us up nicely for what was to come in the second half of the play, when the tables turn and Tessa understands life on the other side of the stand; that of a victim’s pain in reliving intimate details of one’s life in public.

The design, consisting of a small platform with only a single chair as a well-used prop, with atmospheric and mostly bleak lighting by Trent Suidgeest, worked phenomenally well. It was assisted by Lee Lewis’s skilful direction and clever staging alongside Harbridge’s considerable technical abilities. We learn what it took for Tessa to become a lawyer of this calibre, from her working-class background, through law school to a legal firm and then a barrister. Having beaten all the odds to get where she is, she is clearly enjoying a newly acquired social status, due to hard work and talent. She slides easily from working with fellow criminal lawyer, Damien, who comes from an eminently privileged background, into a sexual relationship with him. He attracts her but he is also smart, funny, well-educated.  Not sensing what is to follow, and putting herself in a vulnerable position without realising it, Damien rapes her. We never understand his motives, and he remains shadowy, though one suspects that powerplay is at work here both against her class and gender.

To this point in the play, Sheridan Harbridge’s performance had been rock-solid, in terms of delivering the text and conjuring up vivid images of the people and places she mentions. This was conveyed mostly through convincing and amusing vocal changes, especially of her mother. But the change from a confident, assured professional to someone emotionally and physically exposed after her trauma was electrifying. Her finely nuanced description after the rape, subsequent confused behaviour and response to clinical professionals just doing their jobs, merely highlighted how her life had been completely turned upside down by this experience.

The real power of the play, due to the exceptional well-crafted quality of Miller’s writing, was seen in this change. Harbridge’s role now became an all-encompassing endurance test for the character, skilfully managed and sympathetically delivered by a vulnerable and out-of-control Harbridge. The strength of the character of Tessa is that, with support from her mother, she decides against all odds to take on the system, knowing all too well the pitfalls, her potential unreliability as a witness and the fact that she may not be believed by a jury. We live through this with her, in an emotionally charged final sequence, under the intelligent, assured and empathetic direction by Lewis.

Suzie Miller wrote Prima Facie to address her long-held belief that sexual assault law does not fit the lived experience of women. A human rights and criminal defence lawyer who more recently became a playwright, Miller wrote the play in 2018 when the social environment around the #MeToo movement helped provide a sympathetic platform. Winning the Griffin Award that year, it was subsequently staged by Griffin Theatre Company in 2019, before finally making it to Queensland.

I cannot speak too highly of this play, its relevance and urgency and what it says to us today, in light of the many high-profile sexual assault allegations at the highest echelons of society and recent intensive media coverage. The facts speak for themselves – one in three women are sexually assaulted, only one in ten report it and, of those, only another one in ten get a conviction.  As Tessa so aptly states at the end of this play, in a tearful but also powerful call for justice: ‘Something has to change.’

The creative team behind Prima Facie have produced a piece of social theatre that is so gripping, so well told, and exceptionally well realised that their message should certainly assist in being a catalyst for such change. A seriously important work in the Australian cultural calendar, it would be timely to see it performed far and wide.