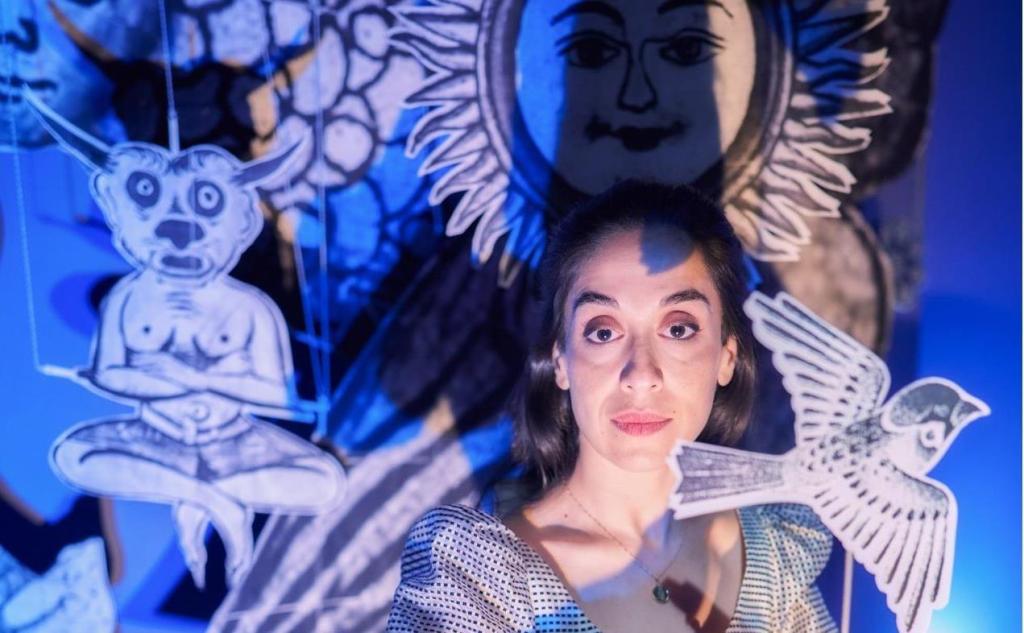 Elnaz Sheshgelani, performer, dancer, puppeteer, and founder of Theatre Playroom, is recreating and reclaiming the Naghali theatrical tradition as part of her doctoral research at the University of Melbourne.

Iranian Bauhaus is a work in the ancient Persian tradition of Naghali, a pre-Islamic style of performance using movement, gesture, puppetry, voice and music, enacted by a sole performer, traditionally employed to tell a historical or mythical epic tale from Iran’s past. Naghali performances were often based on Persian poetry. Here, Sheshgelani presents a feminist version, performing to her own text, which is delivered in voice-over, half in English, half in Farsi, the cadences of which are quietly musical and easy on the ear.

A strongly feminist work, reclaiming the feminine in creation myth, in history, and in the world’s engagement with art and storytelling.

Sheshgelani presented a version of Iranian Bauhaus at the Refugee Festival at The Motley Bauhaus in Fitzroy early in 2020 before lockdown. This new version for La Mama includes her relationship with the establishment itself, the physical space and its extended family, through a performance creating a gentle love letter to theatre. A photo of the original brick La Mama building in Faraday Street forms part of the backdrop with a red cloud hovering above it, referencing the fire of 2018.

Iranian Bauhaus is visually exquisite, with the set consisting of large mobile cut-outs of creatures from Persian folk art, some very ancient images, including a long hanging temple wall (reconstructed by Sheshgelani from an old photo of a single tile), clouds, cupid type figures, a fish-like creature with ears. The images are whimsical and reminiscent of the work of the late artist Mirka Mora. The performance includes some gorgeous pink and golden lighting by Simon Bowland.

Iranian Bauhaus is a strongly feminist work, reclaiming the feminine in creation myth, in history, and in the world’s engagement with art and storytelling. An early reference in verse is to two gods, both women, who may be sisters or who may be lovers. A monster monkey is born and becomes human, overcoming suffering through love.

A soundscape of music flows underneath Sheshgelani’s voice-over text. Sheshgelani performs dance-like movements and gestures, moving in and out of the space in a stylised gestural kind of dance, which is measured yet flowing, playing, and sometimes altering or even destroying elements of the set, such as popping a balloon. She is present and embodied and moves with a childlike sense of wonder as she engages with the elements on stage. Sheshgelani releases one of the mobiles and lies down gently with it, kisses it, a gestural highlight of the performance.

The work plays with ideas of how we frame things, presented literally here with a portrait of La Mama’s Artistic Director Liz Jones in a frame which Sheshgelani then removes from the frame and takes out, wearing the ‘head of Liz’ as a crown – an eloquent thank you to Jones for the role she has played in Sheshgelani’s artistic and personal growth. Much of the work is about the gaze, how the act of looking is transformative; we cannot see or be seen in an unobjective neutral way, but we can aspire to do so.

This is theatre of the love song, but it is not an homage to conventional hetero amato-normative love, but to the love of expression, of life and art, along with an exploration of the ambiguous experience of being alive and of becoming or individuating. At least, that’s how I read it. Iranian Bauhaus changes with each performance with a new guest musician or singer each night responding spontaneously to the text in their own right. The overall effect is timeless and otherworldly without being fey.

I often struggled to hear the voice-over, though and felt that live delivery of the spoken word element would add dynamism to the show. Although Sheshgelani does speak and make sounds on stage, much of what she utters is inaudible. It took me a while to appreciate what was going at first on as the work is subtle and understated; one is used to a more rugged expression of narrative, perhaps, and it takes time to simply give over to what you see and experience without having to ‘get’ every moment. For all that, Iranian Bauhaus is refreshing and beautiful, something quite different.