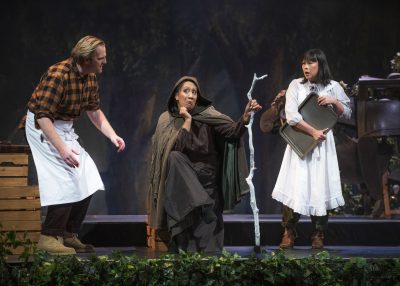 ‘This production, whilst entertaining and musically splendid, is a bit hit-and-miss.’ Photo supplied.

When musical theatre maverick Stephen Sondheim passed away last November, he left behind an indomitable legacy of ground-breaking musicals that pushed the style and subject matter of the form to new heights. One of his most enduring and popular works is the twisted fairytale mash-up Into the Woods. A moderate success in its original Broadway run in the mid 1980s, the show has gone on to become a perennial favourite of professional and amateur theatre companies and schools all over the world. In 2014 Disney produced a lavish screen adaptation starring Meryl Streep as The Witch. Now local Sondheim repertory company Watch This present their version of Into The Woods for a limited season at the Meat Market in North Melbourne.

Sondheim and his collaborator, book writer James Lapine, take classic fairy tale characters, such as Cinderella and Little Red Riding Hood, and create an original story in which a Baker and his Wife are sent off on a magical quest by a mysterious Witch to collect various items in order to break a curse that has left them childless. The first act follows their journey as they encounter these classical characters, obtain the items after much (often hilarious) adversity, and break the curse before seemingly getting their happy ever after. Act Two completely flips the story on its head as doubts start to creep in, betrayal and corruption are exposed, and the central characters are forced to band together to defeat a Giant that is running amok in the kingdom. In short, these archetypal characters are forced to grow up quickly and face some difficult truths.

This production, whilst entertaining and musically splendid, is a bit hit-and-miss. From the casting through to the production design, at times this version of Into The Woods comes across as a perplexing hodgepodge of conflicting ideas. Co-directors Sonia Suares and Melanie Hillman haven’t managed to find a cohesive vision for their interpretation of this beloved piece.

The set design is engaging and immersive. The vast open space of the Meat Market is covered in greenery; vines wrap around golden chandeliers and small grassy flower covered platforms are dotted around the slightly dilapidated space. There’s a charming recycled quality to many of the props and special effects, a particular highlight being the squeaky wooden cow-on-wheels Milky White. Unfortunately, the performance space was not well lit or utilised particularly well in the staging and there were several occasions where the performers were in shadow or positioned awkwardly on stage leaving the audience to wonder where to focus. However, the lighting and staging as a whole was much improved in the second half so perhaps this was a directorial choice to highlight the tightening of the drama.

The costume designs were similarly patchy. Whilst some characters were dressed classic storybook style, such as The Princes and Cinderella’s Stepsisters, other costumes were curiously modern and understated; The Baker and Baker’s Wife, for example, looked like they could be heading out to a Fitzroy pub for a couple of beers. When grouped together on stage, such as in the Act One closer ‘Ever After,’ the clash of designs really stood out.

This dichotomy of styles is even starker in the performances. Watch This regular Nick Simpson-Deeks played the role of Cinderella’s Prince with a delicious combination of gaslighting smugness and prancing buffoonery, and he leaned into the farcical comedic elements inherent in the book, particularly in Act One. On the other hand, as played by James Millar, The Baker appeared weirdly glum throughout and lacked energy. Even when engaging in banter and moments of celebration with his wife (Fiona Choi) Millar played it all very restrained.

It’s always a treat to head back Into the Woods and if you’ve never seen a production of this classic musical be brave and venture out to see this limited run. For the rest of us, you may be left scratching your head.

Into the Woods
A Watch This production