An innovative company continuing to break the fourth wall in theatre with their latest show.
Helen Hopcroft 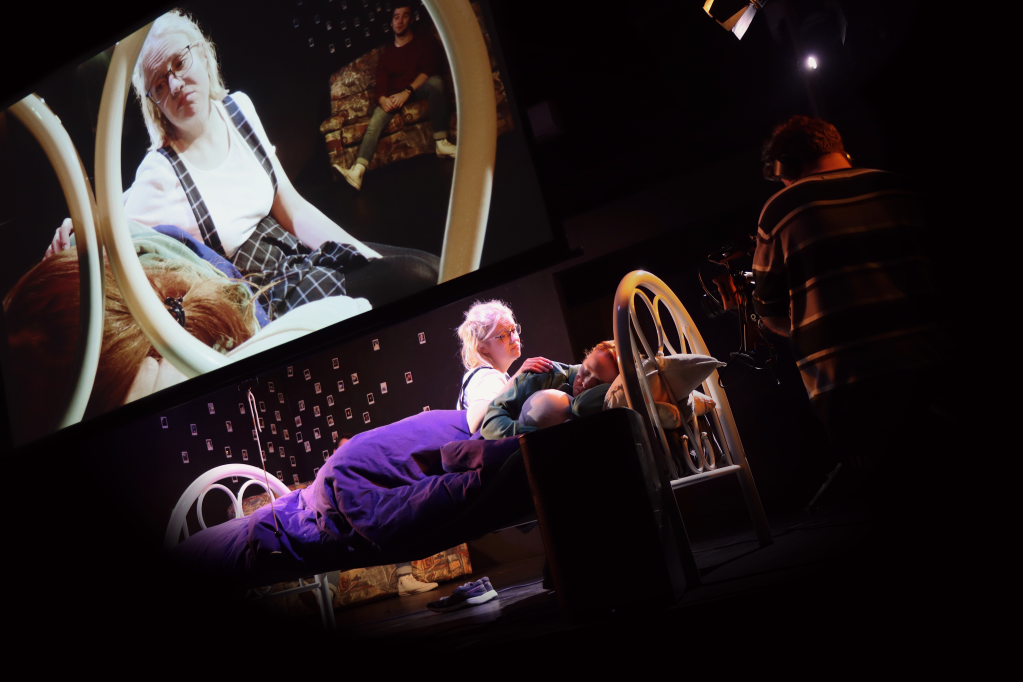 The play continues to fulfil Bearfoot’s objective of exploring issues around ‘gender, sexuality, inclusion and exclusion.’ Picture by Riley McLean.

It’s a cold Wednesday night in Newcastle and we’re sitting in a theatre that usually seats 100 people. Tonight, there’s only 35 people present. Before the show, a man wearing a mask comes to the front of the stage and politely asks us to move further apart, a reminder of the difficulties of staging theatre during a pandemic. The building we’re in feels like a classroom decked out with rows of seats, and a large projection screen hangs down from the roof, blocking most of the stage. Here, There and Everywhere is the latest production by Bearfoot Theatre, the Hunter Valley region’s premier LGBTQIA+ identifying youth theatre company.

I’d seen one of Bearfoot’s productions a few years ago, and was impressed by the intensity of their actors and the way technology was woven into the production. At the time, large screens had displayed video of the characters on stage in a way that seemed as though they were critiquing the ubiquitousness of social media. This earlier production, Playing Face, adroitly spoke to the gap between how people represent themselves online and how they present in real life, and also how important social media is to identity for many younger people.

Like other independent companies, Bearfoot is more driven by the challenge of creating new work that speaks to contemporary issues than recycling existing cultural offerings. They have gained a reputation for making punchy work exploring issues around gender, sexuality, inclusion and exclusion. Here, There and Everywhere, written and directed by Nicolas Thoroughgood, is a continuation of this emerging tradition. It begins with two teenage characters, Joan (Belinda Hodgson) and Amber (Anna Lambert), flirting and talking about what they want out of life: Amber wants to become an actor, while Joan’s goal is simply to be happy. It’s a scene of delicate intimacy in which we learn that the two young women had a previous relationship during high school – cut short by Amber’s sudden departure from the small town in which both live – and ends with a passionate kiss. In the following scenes we are introduced to the two other characters: Sasha (Hannah Richens), who is Joan’s younger sister, and Harry (Lachlan Fairhall), Amber’s best friend.

Like many independent companies, Bearfoot is more driven by the challenge of creating new work that speaks to contemporary issues than recycling existing cultural offerings.

The screen is used to punctuate scenes by providing text that announces location, character names and ages. We meet the characters as older teenagers and watch them as they age into their mid-20s. The literary conceit of skipping through life phases as if they were chapters in a book is enjoyable, but the location of the screen – centre stage and blocking some of the on-stage action – is visually intrusive. It is only at the end of the play, in a crucial farewell scene between Amber and Joan, that the screen is finally removed. In the notebook in which I’m scribbling my impressions, this event is marked by a single word: ‘relief’.

Bearfoot’s exploration of technology and the line between film and theatre continues to be of significant interest. This time their video work is livestreamed from various locations in the theatre and projected onto the screen. For example, we get to see Amber leaving for acting school from an airport – actually a scene filmed contemporaneously in the theatre foyer. At other times, the actors work on stage, and close-up images – with a slight audio lag – are projected onto the screen in front of them. The restrictions necessitated by COVID have forced theatremakers to adapt many existing practices, and Bearfoot’s highly creative use of technology represents this new wave of film/theatre hybrids.

At times the simultaneous presentation of actors and video works beautifully: when Amber finally leaves for acting school and Joan stays home, there’s a poignant scene showing the couple’s loneliness and disconnect, with the screen literally representing a physical barrier to their intimacy. In other moments, the tech crew recording the livestream inadvertently block the actors from audience view. While there’s a long tradition of breaking the fourth wall in theatre, Bearfoot is a company that seems to regard every wall in the theatre as a worthy target: this is to be applauded. It would be great to see what they could do with a larger budget and more flexible staging.

Here, There and Everywhere is a raw and ambitious new work by an inclusive youth theatre company who show no sign of losing their nerve. All performances were strong, but the actor playing Joan – Belinda Hodgson – was especially notable for her expressiveness and physicality. Like all experimental work that refuses to thumb through a well-worn playbook, Here, There and Everywhere takes risks, some of which work and some of which don’t. Regardless, you should buy a ticket to anything they produce: it’s not often you get to see unbridled creative courage.