Theatre Review: Foxholes of the Mind, The Playhouse, Hobart

Shining a light on the long shadow of Vietnam.
Robert Jarman 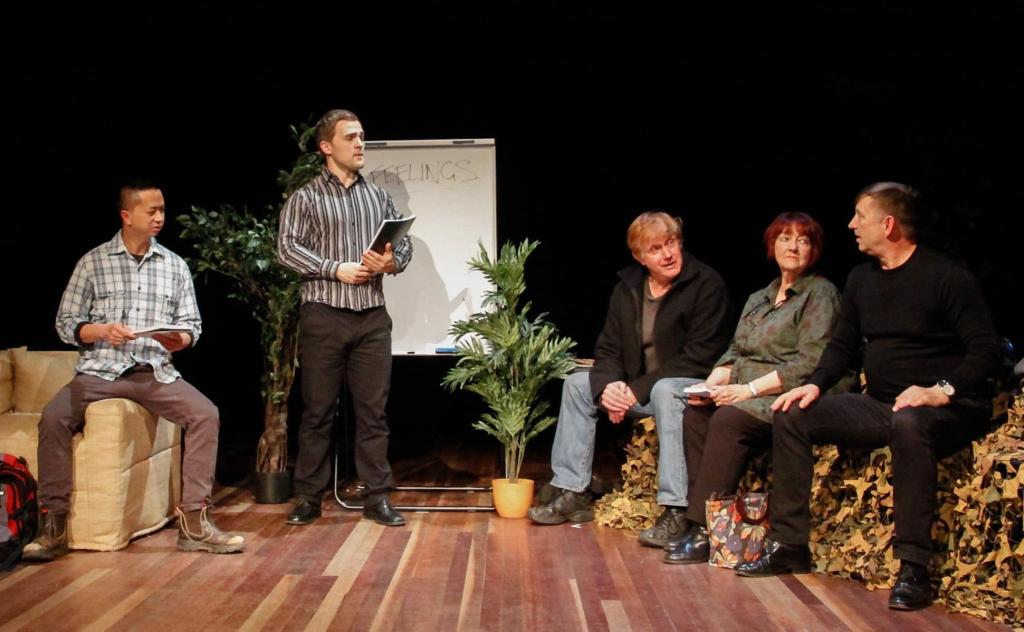 My brother returned from service in the Vietnam War some 50 years ago, yet it continues to haunt even the most mundane aspects of his daily life. An example: when we go together to the cinema, he has to sit in the back row, on the aisle, and he has to have a clear line of sight to at least two exits. Or another: he is put on edge at the mere sound of a helicopter.

Playwright Bernard Clancy served in Vietnam and, through long association with veterans’ organisations over the last five decades. has a deep understanding of PTSD and related issues facing Australian service personnel upon their return to civilian life,

Adding to the small but rich pool of Australian post-Vietnam plays, Clancy’s Foxholes of the Mind has several features which distinguish it.

First, it broadens the scope of enquiry to encompass the experience of personnel serving in more recent conflicts. Building on this, it incorporates a Vietnamese character, Nigel (David Lih), not as the ghostly spectre of past horrors, but rather as a fellow sufferer of PTSD, for Nigel has served in the ADF in Afghanistan.

Also, Foxholes of the Mind does not limit itself to the personal, domestic or political examination of PTSD, but rather embraces all of these, as well as, most extensively, the therapeutic.

Scenes of a fragile domestic relationship – he, Frank (Peter Finlay), a Vet with explosive anger issues and a reluctance to admit there’s a problem, and she, Trish (Joanne Davis), a very long-suffering wife – alternate with scenes of group therapy, attended by a number of Vietnam veterans and led by shiny young psychologist Mark (Victor Gralak).

Nigel, the Vietnamese character, joins the group. In something of missed opportunity, the tension his arrival creates is quickly and easily resolved. Conversely, he serves a valuable function in articulating the different concerns of Afghanistan veterans. Serving a similar function is Sheila (Maureen Hartley) who, as a former Army nurse, provides the perspective of women in conflict. I do not mean to dismiss these roles as merely functional: both are well written and strongly fleshed-out by the actors.

The group therapy scenes are informative, interesting and always engaging, even if the treatment process is necessarily truncated and some of the veterans seem to achieve resolution of their issues with rather too much ease. Less engaging are the domestic scenes, which stagnate early and, for lack of real dramatic build, collapse into pure soap-opera by the over-long final scene.

Directed by Wolf Heidecker, the production is patchy. Production values are low. No designer is credited for the haphazard set; lighting is routine and the sound design particularly clumsy. Scene changes in blackouts feel dated and clunky. One climactic scene played far upstage in almost total darkness is inaudible and impenetrable. (Spoiler: someone dies. I supposed it was one character, but it turned out to be another. Maybe I was meant to be think the wrong thing? I honestly do not know. The scene was incomprehensible.)

Peter Finlay in the lead role of Frank gives a fine, un-showy performance as the man next door: a friendly, funny charmer who’s only just managing to restrain his demons. Finlay brings familiarity and realness to this difficult role: we know this bloke! His resonant voice, alternately cream and thunder, is a particular pleasure of this production.

Also outstanding is Adrian Mulraney playing three beautifully realised and distinct veterans. His vocal and physical realisation of each is flawless, his creation of rounded characters with just a few words and a gesture is admirable, and his transitions between the three elegantly economical. Most impressively, he creates galvanising moments of emotion in tiny, surprising places. This is a very fine performance.

Presented by Wolf Heidecker Arts Management
The Playhouse, Hobart
20-22 May 2020