An engaging fusion of Yiddish poems and cabaret, but the experiment didn't always work.
Charlene Li 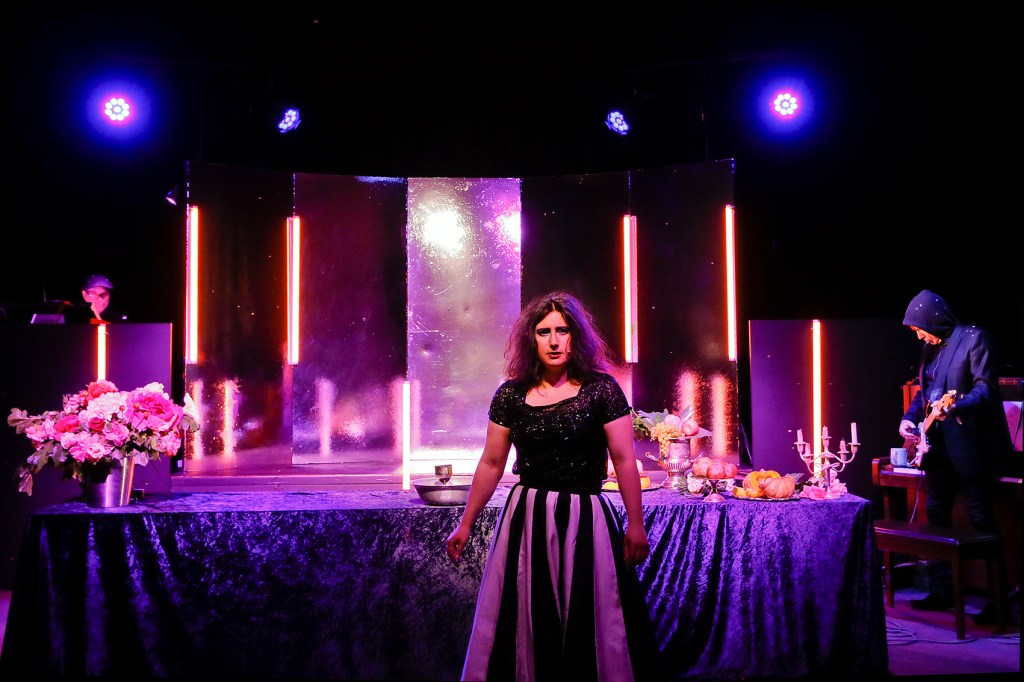 Durkh a Modne Gloz considers how Yiddish song might sound today if history had unfolded differently, and in doing so fuses Yiddish poems and folk songs with Weimar Cabaret musical stylings and Electro beats and textures. The result is colourful, complex and varied – at times it’s alchemy, other times it’s a chemistry experiment gone wrong.

In various facets, Durkh a Modne Gloz brings to stage a series of wonderfully promising ideas and premises – and giving a voice to female poets is commendable, but the end result is underdeveloped and undercooked – albeit consistently enjoyable.

Set design from Adrienne Chisolm and lighting design from Katie Sfetkidis is bold, and at times fuses in strikingly surreal ways, bringing to mind David Lynch and European Avant-Garde theatre. However, there were a handful of times where the lighting was a bit heavy-handed – where it obscured the performers on stage (through glare and excess light – presumably unintentionally) or made the subtitles unreadable.

Galit Klas is a dynamic and engaging storyteller with a powerful voice, but her performance across the show towards the end felt, if not exactly one-dimensional, restricted in the range of performance qualities exuded. There are certainly moments of good dramaturgy, with the climactic scene towards the end reminding the audience of the novelty and idiosyncrasies of live theatre, but the show lacked cohesion.

‘Love and loss’ is a very broad topic (in fact I would guess most songs written in the last five decades are about love and/or loss) so measures to add some structure and cohesion would elevate it from a mere showing of songs to a theatrical work. That could be through spoken exposition introducing the songs, or dividing the work into sub-themes and arcs (eg. the first half of the show could be about falling in love, the second could be about heartbreak, with an interlude about motherhood in between).

Durkh a Modne Gloz is valuable contribution to the Melbourne’s arts scene and I hope to see another iteration of it in coming years. However, this version – while entertaining with moments of magic – had oversights that are hard to ignore or overlook given the wealth of experience and skills that went into making it.

Due to COVID restrictions and the current lockdown, the remaining performances of Durkh A Modne Gloz have been postponed. These shows will be rescheduled and ticket holders will be informed of new dates as soon as possible.