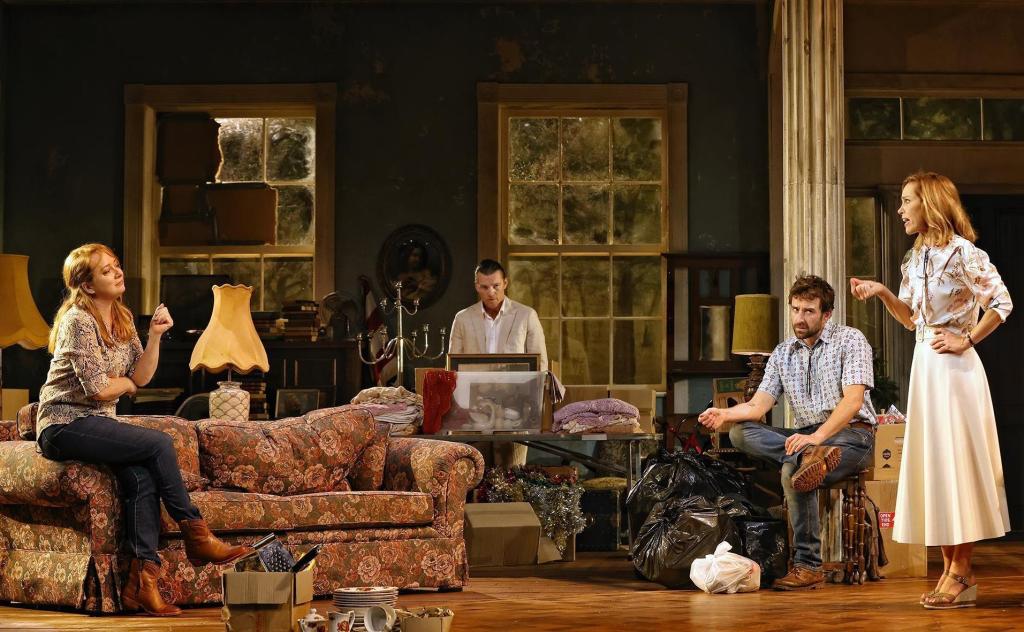 Unnerving and unsettling – it’s a dark and lengthy soundscape that begins Appropriate, now playing at Sydney Theatre Company.  As the bug of discomfiture crawls under ones skin and the people near you squirm, an adeptly pointed elucidation of theme prickles.

Held breath may be mitigated by laughter over the next 2 hours and 40 minutes, but the skilfully generated unease never really quiets. This production of Branden Jacobs-Jenkins’ play wields a precision of silence like a weapon and uses tech as a chaos of invasion.

Rather busy to begin, Franz (Johnny Carr) breaks in through an upper window and lands on the sweeping staircase of a decaying Southern mansion. It’s obviously set in the now as he uses an iphone to light his way in the night. His girlfriend, River (Brenna Harding) falls in behind him.

‘Director Wesley Enoch’s first statement may be a technical one but, as his cast fills the stage, Enoch explores these ‘fucking awful people’ with a torch bright focus on privilege and the legacy of it.’

Franz’s father has died and this damp, toxic and hoarded place is to be sold and may still be worth something. Older sister, Toni (Mandy McElhinney) has cast herself against type as the good daughter who stayed, and brother Bo (Sam Worthington), and his wife Rachael (Lucy Bell), arrive with intention.

Over the next day and night, plantation and patriarchal secrets will reveal themselves, and the siblings, with an almost complete lack of self-awareness or growth, will show their true selves to the audience.

Director Wesley Enoch’s first statement may be a technical one but, as his cast fills the stage, Enoch explores these ‘fucking awful people’ with a torch bright focus on privilege and the legacy of it.

While the interpersonal relationships play out against a background which reeks of money created through, and lost after, slavery, the family dynamics are single generation only. The kids, adolescent, tween and young son, don’t know or care to consider the past. Apart, that is, from its entertainment value.

Worthington neatly treads a fine line as a shut-down man under pressure who will confront his sister but never his wife.  McElhinney thrills as barely repressed ball lightning which sparks constantly and without filter. Unless will is applied – and that is seldom. One of Toni’s storm-offs will elicit a mid-scene applause. Expansive and brittle and finding a new strength in the death of a simmering hatefulness, Bell draws considerable empathy as Rachael and has a deft touch with her uptight comic lines. Carr and Harding are more comically written but Enoch’s stewardship of this text puts their broadness in the background as the lie between them, of which we are aware early, comes into focus.

Visually, the production oozes with deception and dark places. The moulding and yellowing walls are the perfect hiding place for characters who are dressed in the blandest of magnolia hues. At one stage Bo’s ineffectuality puts him way up the back and lost, when he should be taking action. This is just one of the inventive uses of design which creates the unease behind the laughter. The lighting and audio is naturalistic until it is not and shimmers with a pervasive impression of history reclaiming and revenging.

‘… Appropriate has contrasted these white characters’ blackness of heart with a resilience of blakness which is brilliant theatre to watch.’

If the technical aspects of the production’s setting do overstate the themes at the end of the play, the denouement has drawn the silence down in the reveal of each character’s true self to the audience.

There have been many laughs along the way, but Appropriate has contrasted these white characters’ blackness of heart with a resilience of blakness which is brilliant theatre to watch. The appropriate and telling discomfort worth the price of admission.