Daryl Somers, Jason Bensen and cast show that The Producers is a story meant for the stage.
Julia Faragher 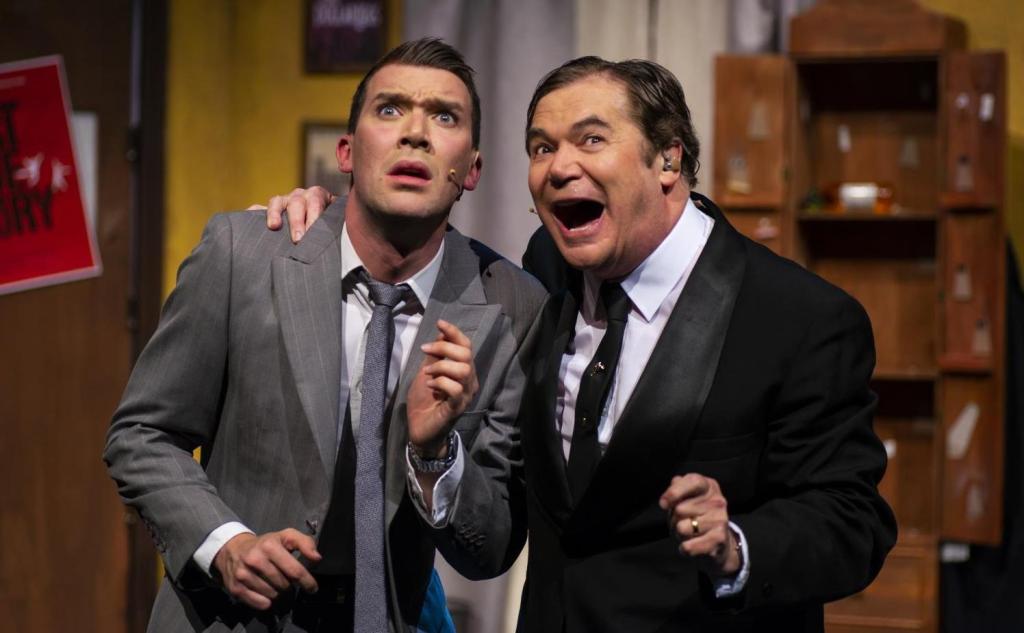 Dramatic Productions’ latest show The Producers welcomes Australian legend Daryl Somers to the Canberra stage to tell the story of how two Broadway producers seek to put on the worst show ever. Max Bialystock and Leo Bloom set their sights on the worst musical imaginable, Springtime for Hitler, and the worst director so that they can pocket the $2 million they have pried out of their investors.

Somers is a delight, bringing to life the brilliant arrogance and selfishness of once-great Broadway producer Max Bialystock. His character has no morals or kind qualities, yet Somers convinces the audience to love him. He keeps the audience on their toes, causing them to root for Bialystock’s scheme to succeed. However, he may be outshone by his scene partner. As Bloom, Jason Bensen looks just as comfortable on stage as three-time Gold Logie-winning Somers. His earnest performance of the socially awkward and bumbling Bloom is the true highlight of the show. While Bialystock is the same man from start to finish, Bensen’s portrayal of Bloom demonstrates his journey from spineless accountant to self-assured Broadway producer.

Zack Drury has the whole audience in tears during his scenes as Franz Liebkind, the fanboy author of Springtime for Hitler. He is captivatingly crazy and supported by a chorus of animatronic pigeons that mimic his every move. The show is backed by an incredibly strong chorus, whose singing, dancing and acting really brings the story to life. Highlights include the female tap chorus in I Wanna Be a Producer and the dozens of old ladies in the Act I Finale. Their depth of performance is impressive, as they play lots of different characters from bustling New Yorkers jabbering about new shows to the gay production ensemble behind eccentric director Roger de Bris.

Unfortunately, despite a strong cast, the show is missing the X-factor element that should make The Producers absolutely unforgettable. While some memorable moments capture that razzle-dazzle feeling of Broadway, it is missing from the show as a whole. Dramatic Productions have done brilliantly with their venue, but The Producers begs for a regal, old New York theatre dripping in history with all the bells and whistles.

Nonetheless, this production proves that The Producers is a story meant for stage, not screen. While the movie is still a big laugh, The Producers mocks the ridiculousness of musicals and is therefore best told in this format.