The Ensemble and ATYP collaborate in this marvellous production.
Lynne Lancaster
[This is archived content and may not display in the originally intended format.] 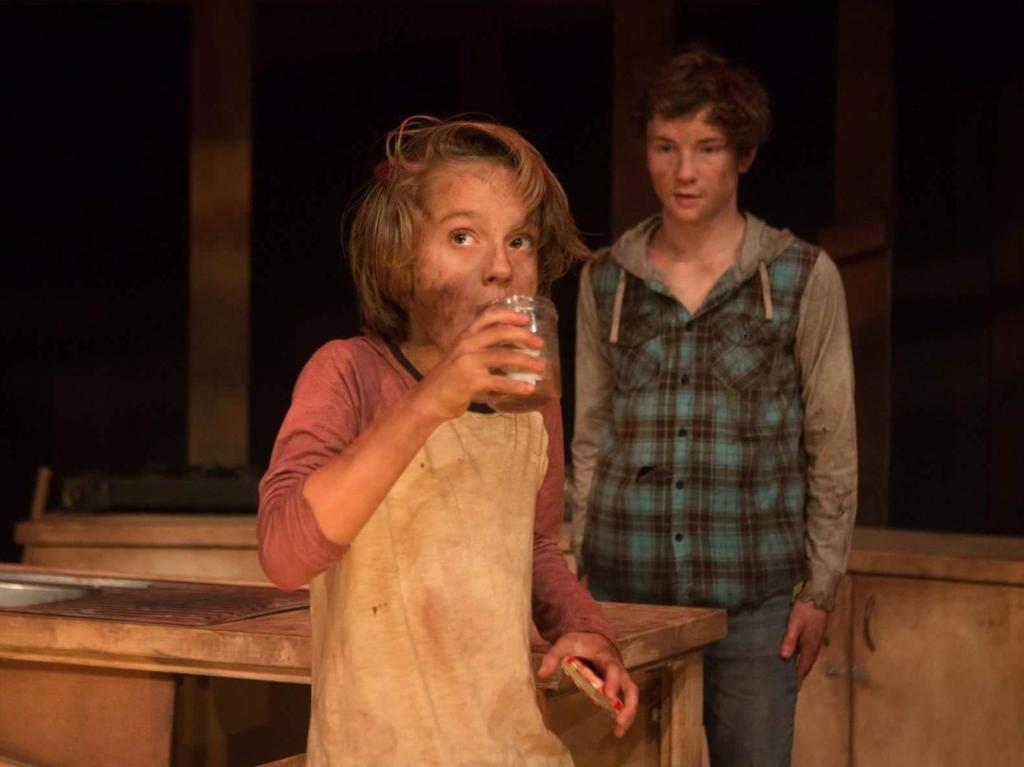 Directed by Fraser Corfield, ​The Big Dry is a tense, gripping production that will have you on the edge of your seat. Based on the novel by Tony Davis and is a coproduction by the Ensemble and ATYP (Australian Theatre for Young People).

Set in a harsh, unforgiving almost feral dystopian world – civilisation as we know it no longer exists. Drought has continued for years and there are major dust storms called Blasters.The landscape is arid; phones no longer work and there is no electricity. Dust is everywhere and seeping into water, lungs and throats. Food and water are scarce, water drips desolately from hoarded pumps.

Enter brothers George and Beeper, now alone after their father has vanished on a shopping trip into town. Beeper is particularly affected by the dust. There are also the Wanderers, dangerous nomads who murder and steal in order to survive. The Wanderers have reverted to a survivalist mentality. People disappear and are never seen again. The Welfare Department have placed all children under seven years old without parents under their protection. One day a strange teenage girl, who we eventually learn is named Emily, lets herself into George and Beeper’s house and at firsts seems to threaten what fragile security they have left. Emily is young rebellious and determined to survive .Can George and Beeper trust her? Can she trust them?

Scary, desperate times need drastic measures and when Emily is a victim of attempted rape and almost killed trying to defend the brothers from a Wanderer, George’s survival instinct rears and he ends up using his father’s ‘last resort’, (an elegant Samurai sword) and drawing on courage he didn’t know he had. Will they all survive this last Blaster?

As George, Rory Potter was splendid. In a finely nuanced performance; Rory Potter enthralls as the responsible older brother looking after Beeper, grieving for his father and plucking up courage when Emily is attacked. Jack Andrew as Beeper was excellent, challenging, cheeky and charming, Beeper’s characters was also played by Noah Sturzaker. Emily was marvelously played by Sofia Nolan. Emily abandoned by her mother, is resilient and can think on her feet. She acts as food gatherer for the three of them .​ Though Emily is emotionally fragile, she also protects the two boys when they are discovered by Welfare. There is a lovely scene where George and Emily hold hands while going to sleep the already asleep Beeper between them.

The show is framed by Rabbit Man played by Richard Sydenham. Rabbit Man is a lonely tramper trying to survive selling rabbit meat and skins and introduces us to the whole show. Tall with a hint of menace. Sydneham also plays the next door neighbour who is rather unhelpful and ineffectual, coming by rather too late at the end.

Throughout the play there is a running theme of the story of Oscar Wilde’s The Selfish Giant, showing a criticism of society and our approach to climate change.

Rita Carmody’s set design is a wonderful rather crumbling house, dirty light wood in colour with a small gas cook top. A kitchen sink is in the middle and not much in the cupboards. Giving the feeling of a large and open space and there is an upper level that can be hidden in and other rooms we imagine behind the doors .Lighting designer Benjamin Brockman creates wonderful harsh unforgiving landscapes, highlighting the unforgiving climate in its many moods. Snappy blackouts are used cinematically to indicate scene and time changes and haze and strobe lighting are used. Sounds creator Daryl Wallis brings ominous rumbles and sinister noises.

This is a bleak, riveting production that forces us to think about climate change and relationships.