A sweet, simple story, beautifully presented and performed.
Nerida Dickinson
[This is archived content and may not display in the originally intended format.] 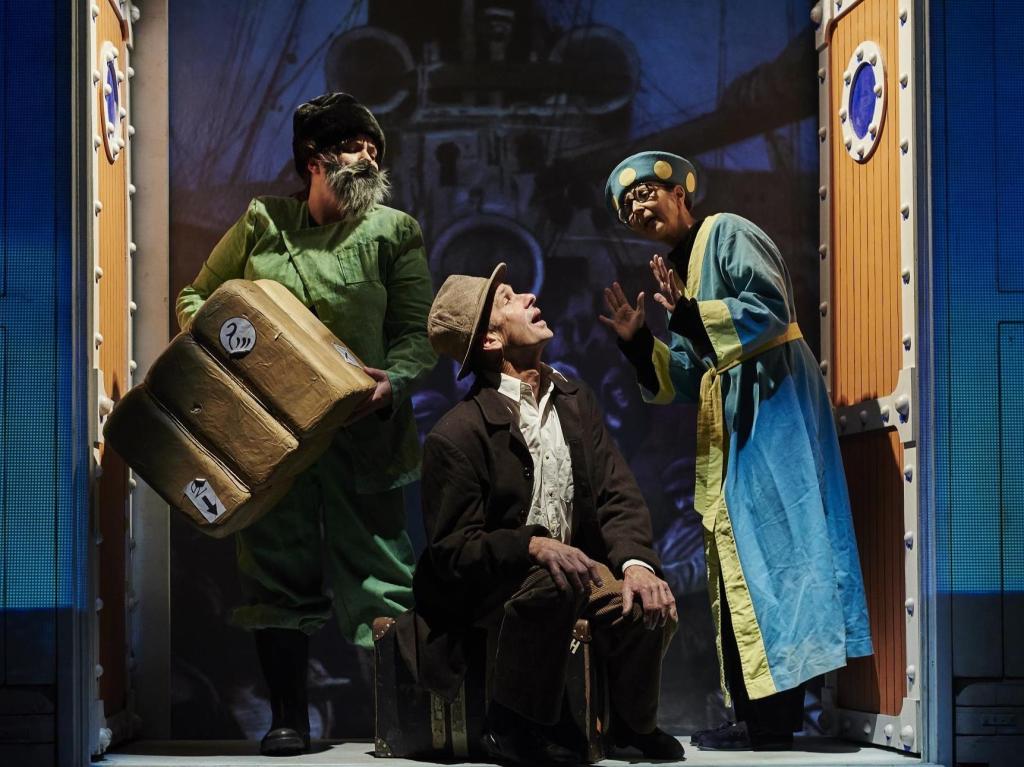 Aki lives with his beloved wife and daughter, and while together they are happy, there are bad things where they live. He leaves them, and goes on a boat a long way away, to another place where there are many different things, but not the scary bad things that made him leave his family. Life is hard for Aki in the new place – he cannot talk with people, money is new and confusing, the animals are strange and frightening and he doesn’t even know what food is or how to eat it. As he encounters new and interesting things, he draws pictures and sends them back to his daughter, who also sends pictures of herself and her mother to him. One day, something new happens, and his friends cheer as he runs to meet the new arrivals – he hugs his wife and daughter again.

Adapted from early concepts of Shaun Tan’s award-winning graphic novel, The Arrival, Phillip Mitchell and Spare Parts Puppet Theatre have developed an appealing and universally accessible narrative. The story is stripped back to allow staged development, while still reflecting the essence of Tan’s story and imagery in a way to delight children and adults alike.

As in the book, there are no words spoken throughout the performance, each actor establishing their characters through physical expression, a task made all the more challenging for having to impress a young audience. Ellis Pearson plays Aki, full of wide eyed innocence despite his many hardships and need to escape from a fearful situation. His natural hope and friendliness sees him overcome the difficulties and make a new life without fear – all conveyed through his expressive face and physical reactions. Shirley van Sanden uses her distinctive costumes and knack for slapstick clowning to create humorous and sternly kind characters as Aki struggles in his new life. Her landlady character’s eventual acceptance of Aki as a friend and sharing of her own story reveals that he is not alone as a new arrival in this new land, and that there are many stories behind the faces that he sees each day. Alicia Osyka’s clear and striking facial expressions to accompany her mimed instructions are a highlight as she trains and works with Aki, revealing more things about this new place to him.

Puppets have their place in this work, with two quirky animal creatures bringing a playful element to the story, the blue and yellow creations squawking and yipping, bringing human characters together. While scary dragons frighten Aki away from finishing his first job, a mysterious flying bird inspires another lovely sketch home to his daughter. The letters to and from his daughter are sent by origami cranes, flying across the oceans in a beautiful harmony of puppetry, Michael Barlow’s fantastic animated screens adapting Tan’s line drawings and harmonising with Lee Buddle’s evocative musical score. Puppeteer Adrienne Patterson is deft behind the screens, allowing the puppets to interact with the performers in realistic fashion, smoothly handing over control in a way that brings the creatures to slightly annoying, but very cute life.

Set design is simple yet versatile in the best tradition of puppet theatre, but combined with Barlow’s animation design creates a stunning world around the main characters. With the tightly timed AV cues, Aki rides a ship on rolling waves, gets lost in the streets of a busy town, watches amazing things happen around him and sees his landlady’s memories unfold on a sheet hanging out to dry.

Inspired by beautiful source material, Spare Parts Puppet Theatre present The Arrival as a mime and puppet work with universally appealing themes, leaving audiences smiling and humming a haunting melody as they leave the theatre.