Based on the Greek tragedies of Aeschylus, Euripides and Sophocles – this is an original TheatreiNQ production adapted and directed by Terri Brabon.
Trevor Keeling
[This is archived content and may not display in the originally intended format.] 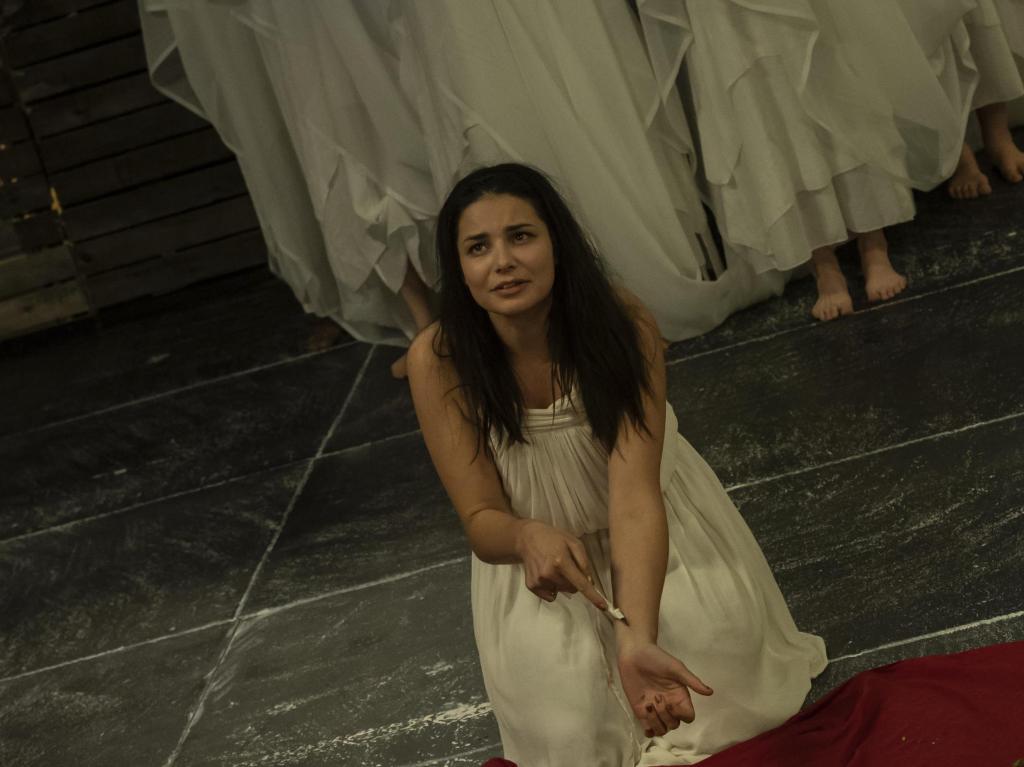 It takes a brave person to tackle Greek theatre – not only from a commercial perspective (it hardly has a mainstream audience after all) but also from an artistic perspective as it presents enormous challenges on many levels.

From an audience perspective, it is a form of classical theatre that is unfamiliar territory to many not only because of its style and format, but also the stories and legends that are enshrined in its lexicon. From an artistic perspective there are two main challenges which need to be conquered to pull it off convincingly. Firstly, it requires an incredibly demanding acting style from the lead actors, and secondly, it requires a coherent and comprehensible chorus to lead the audience into the action.

First Born tackles the traditional Greek myths which involve King Agamenon, Queen Clytemnestra and their erstwhile offspring Electra and Orestes and the various murders that are committed by the protaganists, and director Terri Brabon has adapted this new visually stunning version mostly to great effect.

Brabon’s theatrical instincts are impeccable – her staging, technique, direction and abilities to extract results from the cast of professional and community actors is extraordinary – and this production is no different. For the most part costumed magnificently, lit simply but innovatively against a simple but effective set, she has produced a script which is accessible, true to the original and clearly demonstrates her deep-rooted love and knowledge of classical theatre, particularly her reverence of language.

Where the script probably falters, however, is in not perhaps fully developing several of the characters, in particular the key character of Electra, played with surprising restraint by recent NIDA graduate Emily Edwards who has returned to her Townsville roots to appear in this production. The script did not allow her the opportunity to really explore the enormity of agony and emotion in the same way that, for example, Anna Vella-Samms did most impressively in her single key scene as Cassandra.

And this immensity of emotion is the key to the success – or otherwise – of any production of Greek tragedy.  There is nothing small or subtle about Greek theatre. Everything about it from the characters to the emotions they portray are large and larger than life. It cannot be played naturalistically – it has to be bold and the very fact that the plays are about people who are important or who have outstanding personal qualities and are faced with disaster through a combination of personal failing or circumstances with which he/she has cannot deal is the very stuff of the human condition.

What this requires is enormous sources of stamina, vocal technique and experience from the actors, and this is where experience and training becomes the distinguishing feature.

But it is not individual performance that is the characteristic feature in any of Brabon’s productions – it is the sense of ensemble, and she has drawn on this to produce an 11-strong mixed Greek chorus which for me were the ultimate strength – and highlight – of this entire production.

No boring chanting chorus was this. Instead, this was a vibrant, unified and molten body of actors brought alive through creative song, poetry and movement. Drilled to the nth degree, Brabon has cleverly combined the traditional elements of Greek chorus performance into a contemporary interpretation. Instead of donning masks, female members of the chorus were instead united with a vast length of netting which produced a ghostlike ethereal quality befitting of their dual status as chorus and Furies (known to be instruments of justice – perhaps precursors to J.K.Rowling’s Dementors of Harry Potter renown?).

In essence, this is a production which gives Townsville audiences a visually exciting theatrical experience of something really different.