Cutting through hype, AGSA’s take on Ben Quilty’s career is mapped across a less predictable path, encouraging audiences to think beyond his seductive impasto surfaces.
Gina Fairley
[This is archived content and may not display in the originally intended format.] 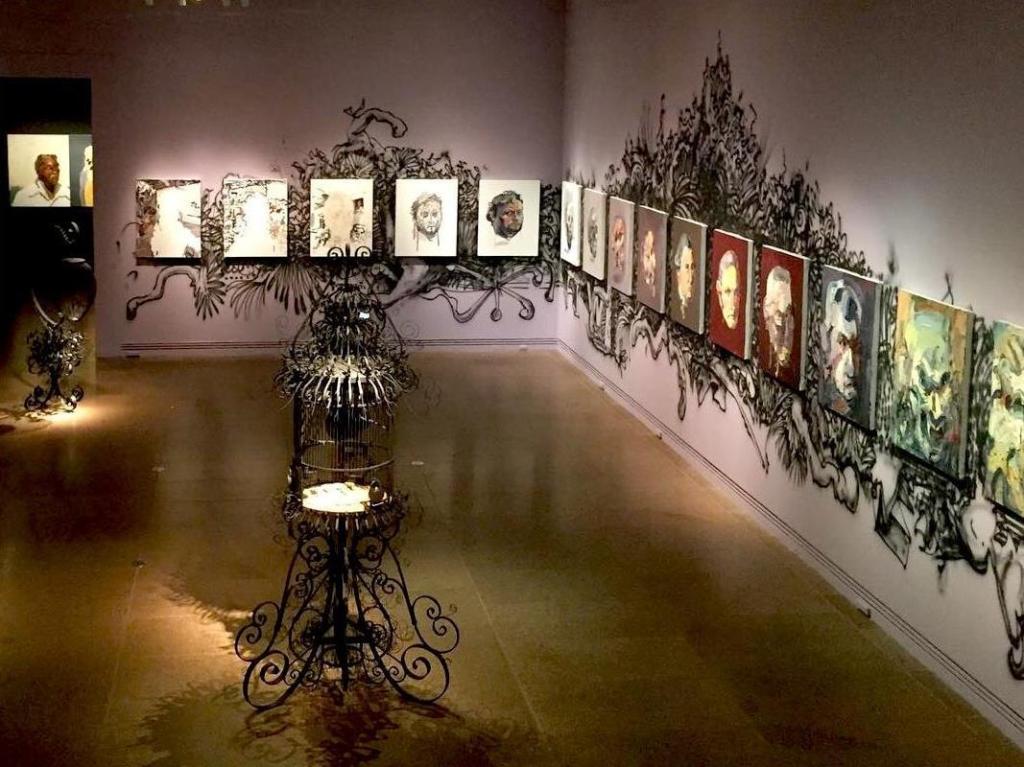 Lavender walls that hint of trauma upon flesh – aka a bruise; an Archibald winning painting tucked in a back corner under the stairs; and barely a Holden Torana, skull, hamburger or baby portrait in sight – this is not the exhibition one expected to see rolled out for Ben Quilty’s first major survey.

Curated by Lisa Slade, Assistant Director, Artistic Programs at Art Gallery of South Australia (AGSA) – and titled simply, with the single name we usually reserve for celebrities – Quilty is an exhibition that both surprises and enthralls.

Slade said that while she pondered alternate titles, Quilty allowed the work to stand more on its own, and if anything alleviated it from being framed thematically around our perceptions about Ben Quilty and his work.

As a viewer, that open shift is apparently clear. Descending to the lower galleries at AGSA, a suite of 16 paintings wrestle through varying stages of abstraction and reframe colonialism as they progress along walls that have been graffitied by the artist’s own hand. Is it defiance against the establishment, against histories, or a returning to roots?

One’s first encounter with Inhabit (2010) is equally decorative yet raw; surprising while familiar. We get this push and pull right across this survey exhibition, and it is perhaps the most successful device that Slade has used to disarm and recalibrate our thoughts on Quilty.

There are no sculptures in this show of over 70 works tracing 20 years – there are no life-jacket installations, no wedding dresses – but there is a quirky group of ceramics, kind of Toby Jugs gone wrong. Quilty has re-purposed Victorian washing basin jugs found in antique shops, and presented them in traditional museum cases; their smashed up portraits re-cast as endorsed witnesses to war.

I didn’t know this work of Quilty’s, and for me, they offer a kind of slippage from the media hype, and point to the complexity of the man who yearns also for privacy and introspection.

Straight up, Slade pits AGSA deep in this story of Quilty – Inhabit was purchased by the gallery in 2011, and Quilty has been subsequently collected and shown in the Adelaide Biennial of Australian Art (2014) and Sappers and Shrapnel (2017), also curated by Slade – who has known Quilty for more than two decades.

With that knowledge comes trust; and in a strange way that is palpable in this show. For example, also in this first room are two Holden Torana paintings and a self-portrait smashed Rorschach from 2009 – the only three works that stitch a connection to Quilty’s first survey exhibition, Ben Quilty Live, also curated by Slade for UQ Art Museum 8 May 2009. In fact the same device of hanging works on graffiti-scrawled walls connects the two shows.

While shown at AGSA, Quilty’s Archibald-winning portrait of Margaret Olley (2011) sits in an obscure corner – almost like an afterthought. One can only imagine that it will be central to the survey’s presentation in Brisbane, where the exhibition travels to Queensland Art Gallery / Gallery of Modern to coincide with their Margaret Olley retrospective.

I was told, as a teaser, that Quilty will be taking to the walls there also, but drawing from his personal sketchbook and memories of time spent with Olley herself.

What these anecdotes and pairings say to me, is that Quilty focuses less on the early paintings of young male machinations, instead exploring a more psychological landscape that maps an artist grappling with his own sense of self and his place in a dysfunctional world.

To continue this thesis, Slade has hung Quilty’s self-portrait painted after the execution of Myuran Sukumaran with a portrait he painted of the convicted Bali Nine member during their heroin trafficking trial. It was one of only two portraits Quilty painted of Sukumaran, despite their 10-year friendship.

Co-Director of Adelaide Festival Rachel Healy reminds us: ‘The subjects may be still, but we feel the tempest raging inside.’

They hang in a central gallery of portraits of soldiers who were posted to Afghanistan, where Quilty was an official war artist in 2011 – around the same time of his Archibald fame.

The gallery prior is dominated by two enormous Rorschach landscapes – Fairy Bower Rorschach (2012), and the most recent work in the exhibition, Irin Irunji (2018) – both offering a radical revisioning of the Australian landscape.

The former was made after Quilty discovered the violent history of an idyllic picnic spot on Gundunngarra country, not far from his home in the Southern Highlands. The later continues that narrative of trauma, but comes from South Australia’s APY Lands – Anangu Country.

In late 2017, elder Frank Young entrusted Quilty with a harrowing account of colonial violence, where a white dingo scalper defiled a spiritual water source by bathing in it. In retribution he was killed, which lead to the massacre of many Aboriginal men.

This kind of visceral DNA of trauma sitting in the landscape is carried through to the next room, and the next.

Acting as a bookmark to Fairy Bower Rorschach and Irin Irunji is the expansive painting, The Island (2013), which returns to AGSA after its debut at the 2014 Adelaide Biennial.

Informed by imagery associated with 1980s Australian surf culture and speaking of the politics of arrival, displacement and mythologised utopia, it sits alongside another reading of the coast – that point of refugee contact. 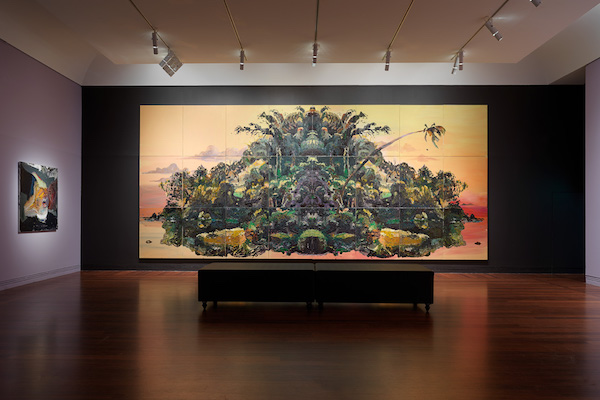 Conceived as a metaphor for the high-tide line (and all individually named) the work is a suite of 12 panels of life-jacket portraits standing in for the last 12 suicides that occurred before their painting in Australia’s off-shore detention centres. Essentially, it is a memorial.

Quilty explained in an artist talk over the opening weekend: ‘We were flying into Lesbos and we could see the line of orange on the shoreline from the plane – I immediately knew it was life jackets.’

Quilty added that the painting was earmarked for the prestigious Pearl Lam Gallery, but was rejected when images were viewed of the work. ‘I was told, “people in Singapore are not interested in refugees,”’ said Quilty.

Quilty’s Australian gallery Tolarno, showed it at the Hong Art Fair alongside Pearl Lam, where despite the panels being offered individually, it was purchased as a whole and gifted to AGSA in memorial to those lives lost. 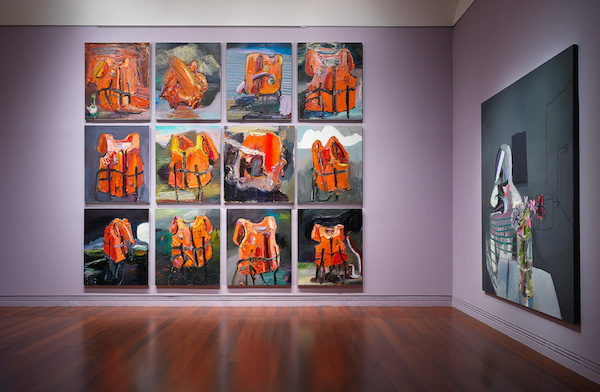 In speaking with Quilty, however, it was a painting finished in the days that followed Trump’s inauguration as President that he felt carried the most impact for him personally when looking back over this survey exhibition.

The Last Supper (2016) sits central to the exhibition, alongside works rolled out of the studio that offer a critical lens on the irresponsibility of global politics and the blatant erosion of empathy.

Whether it is The Last Supper, High Tide Line, The Island or Irin Irunji that does it for you as a viewer is indifferent. What Quilty desires though these works is to reinstate compassion into our national psyche.

Director AGSA Rhana Devenport explained this belly-tug feeling we get in viewing Quilty’s work: ‘[It] hovers between the intensity of painterly obsession and the searing concentration that directly confronts the human condition – but there is always hope – and he reminds us of our role as critical citizens.’

As viewers, and listeners, we have become accustomed to the noise around Quilty and his career – his “brilliance”, his compassion and advocacy for causes, his likeable school-boy persona, and his exuberant gestures in the way he wields paint.

Some have been quick to criticise him for his high profile success, but through this exhibition Slade reminds audiences how genuine his drive is to give visibility and voice to injustice and to seed empathy and compassion in our self-absorbed worlds.

One only need remember that Quilty maintained a 10-year relationship with Sukumaran from the Bali Nine’s original 2005 conviction until his final weeks in April 2015. This has been a 20-year campaign for Quilty; few artists can offer that same commitment.

Are we tired of it? For many the answer would be yes. For others, no – they are invigorated, inspired. If we, as an arts community, cannot support artists with the courage to speak through their art beyond the silos of our own sector, then we have little to be proud of. And simply, this work speaks volumes.

Gina Fairley travelled to Adelaide as a guest of the Art Gallery of South Australia.