Review: Love is the Message, The Message is Death, Sydney Opera House

Arthur Jafa’s video work explores police brutality and the contradictions of America today.
Soo-Min Shim
[This is archived content and may not display in the originally intended format.] 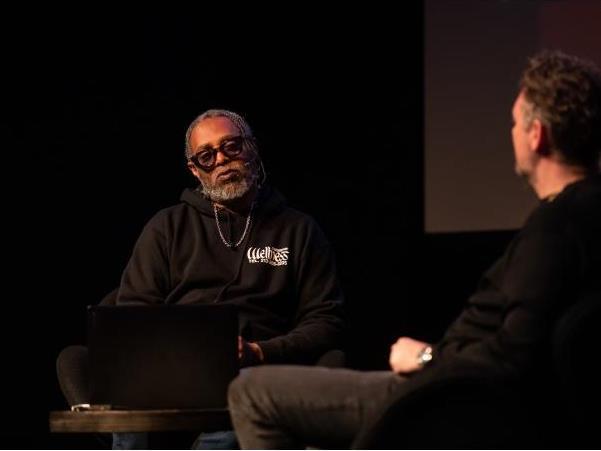 With Kanye West’s hymn-like gospel song Ultralight Beam playing behind her on the screen, actress Amandla Stenberg implores ‘What would America be like if we loved black people as much as we love black culture?’ This brief moment from Arthur Jafa’s seven-minute video collage Love is the Message, The Message is Death (2016) exposes the paradoxes and complexities of African-American culture, art and existence in contemporary America.

On 30 May 2019, The Hidden Pulse 脈動深藏 in collaboration with M+ at the Sydney Opera House presented a screening of this award-winning video work followed by an interview between Jafa and artist Brook Andrew as part of Vivid Sydney.

Stenberg’s rhetorical question encapsulates the contradictions of America’s history and culture for African-Americans as personal videos of everyday mundane life are contrasted with the intense violence and trauma African-American communities continue to face. Confrontational footage shot on a mobile phone shows Texan police throwing a teenage girl to the ground at a pool party, immediately juxtaposed with images of young children dancing the ‘dougie’, a viral hip-hop dance move popularised by African-American communities. Jafa mixes footage from YouTube videos, historical archives, and police camera recordings: We see Martin Luther King waving at a parade, Barack Obama singing Amazing Grace at the eulogy for the nine Charleston parishioners killed by a white supremacist in 2015, Michael Jackson dancing in the back seat of a town car, and Beyoncé in her music video 7/11. Through his inter-cutting, Jafa reveals the taut, unpredictable, fraught matrices that racialised African-American bodies must navigate, between hope and joy, fear and loss.

These shots are further interspersed with recurring images of the blazing surface of the sun, which seem ostensibly misplaced. However, these ambiguous shots may be interpreted as Jafa asking us to consider this political moment at a cosmological level. The video is more than just an archive of the systemic racism and institutional oppression that African-Americans face. Rather, Jafa expands the locally specific to a greater existential and philosophical enquiry.

Indeed, in their conversation, Jafa and Andrew discussed the perils of becoming pigeon-holed by their respective identities. Jafa shared his admiration for the Baroque Italian sculptor, Gian Lorenzo Bernini, remarking that ‘I have never heard anybody talk about Bernini in relationship to Love is the Message, The Message is Death, which seems to me super pronounced… both are about bodies and Bernini’s work at the time was also “political”.’ Jafa continued to acknowledge that whilst his work has rightfully been framed in the context of the Black Lives Matter movement, it also transcends it. As Jafa proclaims, ‘any art is part of the politics of the moment, but in time those things, the specifics, recede and you are left with the more elemental stuff in terms of human beings struggling against one another… it’s the same thing with Love is the Message, The Message is Death.’

Jafa and Brooks’ conversation highlighted interesting and poignant points in paralleling the institutional whiteness and white supremacy that continues to terrorise both America and Australia. They both advocated for the prioritisation of art away from the Western canon and the exigency of politics in both countries. Ultimately, however, Jafa’s message was one of hope and the continued elevation of African-American voices into the future.

Love is the Message, the Message is Death
Arthur Jafa
presented by The Hidden Pulse 脈動深藏 in collaboration with Hong Kong’s M+ as part of Vivid Sydney
30 May 2019
Playhouse, Sydney Opera House
Tickets $22

Soo-Min Shim is an arts writer and arts worker living on stolen Gadigal land. She received her Bachelor of Art History and Theory (First Class Honours) from the University of Sydney and is currently a Director at Firstdraft Gallery 2019-2020. She is currently a studio resident at Broadway Sydney x 4A Centre for Contemporary Asian Art Creative Studios. She has written for several Australian and international publications including Art & The Public Sphere, ArtAsiaPacific, The Artling, Art + Australia, Art Almanac, Artist Profile, Runway Conversations, un Extended, and Running Dog.