What is a crowd? This is the question artist Baden Pailthorpe posed for himself as he worked with AFL player and crowd data to develop his current solo exhibition at UTS Gallery – Clanger.
Nick Lavery
[This is archived content and may not display in the originally intended format.] 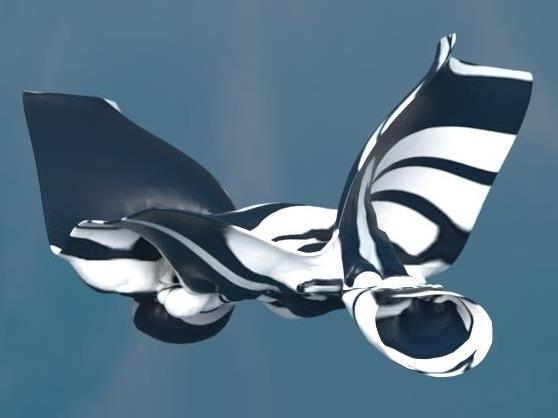 What is a crowd? A mass of harnessed energy? Potential chaos? Opposing communities of loyal strangers? This is the question artist Baden Pailthorpe posed for himself as he worked with AFL player and crowd data to develop his current solo exhibition at UTS Gallery – Clanger.

Upon entering Baden Pailthorpe’s Clanger, the atmosphere is electric with anticipation, there is a sense of the ground trembling from anxious hearts, fuelled by the love for a team. In many ways being part of an AFL crowd is something of a religious experience. And so it is that in the gallery the hair on the back of your neck may rise with the ominous soundtrack, and your eyes may be entranced by the video works on show. These visualisations of the crowd are not always pretty – but neither are AFL matches. As an artist, Pailthorpe explores beauty with an honesty to his subjects’ character – charting the metamorphosis of the crowd from the individuals who enter a stadium, to the interconnected living phenomena that leaves it. He has captured the truth of these sporting crowds – where the power lies in being part of something bigger than yourself. In Clanger, as in the stadium, unacquainted individuals become brothers in arms, in a fierce battle between a subjective good and evil.

The video projection Clanger (longitude, latitude, decibels), 2018 reconciles the unpredictability of human emotion, excitement and tribalism, with the logical nature of statistics. At first the huge ‘thing’ in the middle of the SCG field is white, a display of nothing but pure potential, a blank canvas on which the crowd’s reactions will be painted. As the game commences the ‘thing’  takes on form, movement and colour; the artist brings this organism to life, shaping the reactions of the crowd into one living entity. The huge amoeba shaped being in the middle of the field ebbs and pulsates – even breaths – in response to the crowd’s elation and tribulation. Through the compilation of statistics and empirical observation of the crowd, life is formed into a single unit; individuals are infinitely inter-connected, through a homogenous simulation of their senses.

At the opposing end of the gallery, 36-individual screens represent the players on the field, giving the audience an alternate perspective into the mind of the crowd and its relationship to the game. The peaks and troughs of the de-identified players from the Swans and Carlton teams parallel the level of emotional reaction provoked from the crowd. The sharper and more sporadic these peaks and valleys, the more volatile the impact that particular player has on the crowd.

The intricacy and intensity of human emotion is a complex sport. Clanger captures the nuance of human passion and the habits and traditions of Australian sporting culture, where the profound and the arcane are so often intertwined.

Nick Lavery is a first year student studying Global Studies in the faculty of Arts and Social Sciences at UTS. Interested particularly in the philosophy and psychology of writers such as Dostoyevsky, Nietzsche and Pirsig, as well as the narratives of Kerouac and Thompson, Lavery plans to continue his literary pursuits by formally studying philosophy and exploring narrative perspective.