From bewigged airheads to mysterious animated black beetles, the fast-moving visuals and dramatic intensity of Anna Bolena brings history into a lively tech-take, with vibrant singing to match.
Miriam Cosic 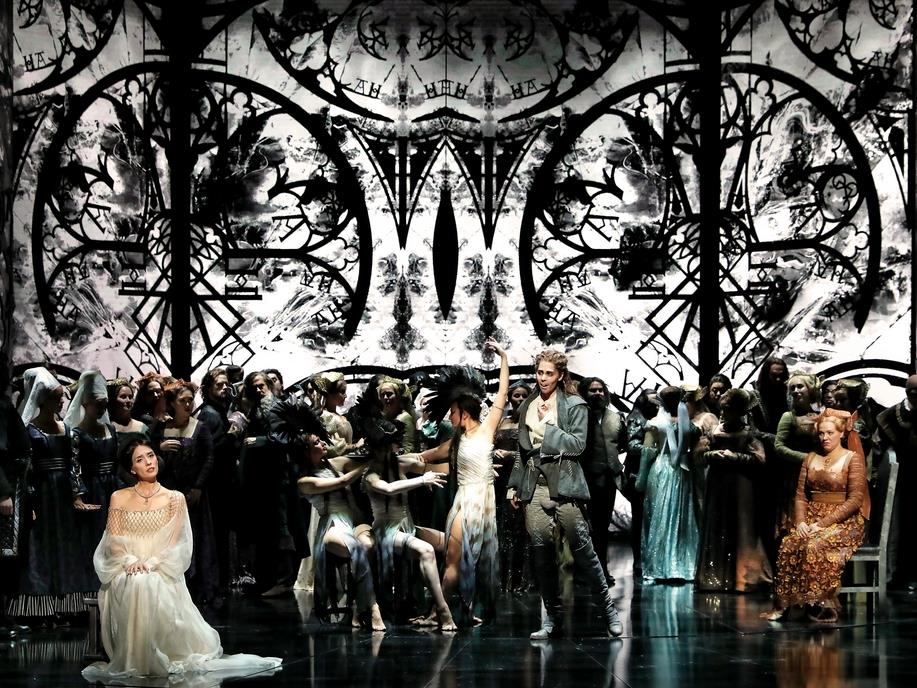 The opening wasn’t auspicious. As conductor Renate Palumbo led the Opera Australia Chorus into a lively account of Donizetti’s overture to Anna Bolena, a bunch of feminine airheads, bewigged with 18th-century hair and variations on a mini slip/crinoline, strolled the revolving centre of the stage primping, taking selfies and taking or leaving a bunch of roses that must have signified something.

Black and white images of 21st c. London on director Davide Livermore’s towering LED screens, and spanning architectural history from London Bridge to the Gherkin, at least situated us. They were designed by the Italian outfits, set designers Giò Forma and digital designers G-Wok.

But what the airheads were meant to presage for the coming horrors of Henry VIII’s treatment of the women in his life is anyone’s guess.

The production soon settled down.

Livermore’s use of the giant moving screens threatened to overwhelm the drama – some elderly patrons were heard complaining about that at the interval – but instead mostly managed to intensify the drama using abstract medieval calligraphy and stylised video of forests and storms.

Opera Australia didn’t have programmes for the show, only coloured paper printouts of their website’s marketing spiel, so the historic era of the graphics –  let alone the black beetles that moved through them on and off through the three-hour performance – remains a mystery.

Geò Forma often had the chorus moving about in shadow, dark clouds or smoke looming overhead, which set a morbid mood.

In the forest hunting scene, where the king meets the man Anna had been betrothed to and still loved, Lord Percy, the unfathomable dancers of the overture become charming ground-pawing, mane-tossing horses.

The highlight of the evening, however, was the music. Palumbo kept a firm hand on Donizetti’s trademark alternation between fast-moving allegro and mournful adagio. And the leading singers were masters of his bel canto style. Between the fast-moving visuals and the dramatic intensity of the acting, the first half of the opera in particular was riveting.

The indisputable star of the evening was Albanian soprano Ermonela Jaho. Her Anna Bolena – disarmingly tense, distressed, despairing and ultimately mad – was electric.

The opera rolls back the historic portrayal of Anne Boleyn as hard and scheming, though much is made of her ambition in discarding Percy and marrying the king. (And nothing at all is made of the fact that her betrothal to Percy was broken off because his father didn’t approve, let alone the three miscarriages after the birth of a daughter that caused the king’s eye to wander in search of a male heir).

In this production, she is a tragic victim of both circumstance and her own hubris. Jaho’s coloratura was explosive, though she struggled to close her top notes more than once.

From her heart-stopping first aria to the hysteria and final reconciliation to her fate in the end, her stage presence was given unusual depth by her ability to switch from a haunting whisper to an existential howl. The chorus, too, often sang pianissimo.

Carmen Topciu’s Jane Seymour, the lady-in-waiting who betrayed Queen Anne with King Henry and would become his next wife, his third of six, was a lyrical foil to Jaho’s Anna once she settled after a slow start: deep and rich and mournful to Jaho’s freneticism.

The Act 2 duet in which she told her mistress that she was the “other woman” was a revelation. Local mezzo, Anna Dowsley, fast getting a name for exciting performance of trouser roles, was perfect as young Mark Smeaton: her singing faultless, her wannabe swashbuckling a wonderfully naive foil to the court powers around her.

Teddy Tahu Rhodes’ height and deep voice – more bass than baritone here – gave King Henry a powerful stage presence. But a struggle with the register and an oversupply of resonance dulled his delivery and his diction was incomprehensible.

When the love-struck younger Percy arrived on the scene, charismatic Mantua-born tenor Leonardo Cortellazzi was a sharp contrast, singing with agility and complete clarity in his mother tongue.

OA’s paper programme didn’t acknowledge the little girl who performed the young Queen Elizabeth, as perfectly turned out with her red hair and Tudor costume as a Velázquez Infanta. Nor is there an explanation for the contempt she constantly showed her mother.

Her appearance did remind me however of the irony that after the nightmare of King Henry’s murderous and revolutionary succession planning, his daughter’s reign would turn out to be the first of three by queens: the longest, most peaceful and economically successful in Britain’s history.