A collective of musicians, dancers and writers weave ancient texts, myths and traditions into a recital exploring collective connection to old and new homelands.
Priyanka Bromhead 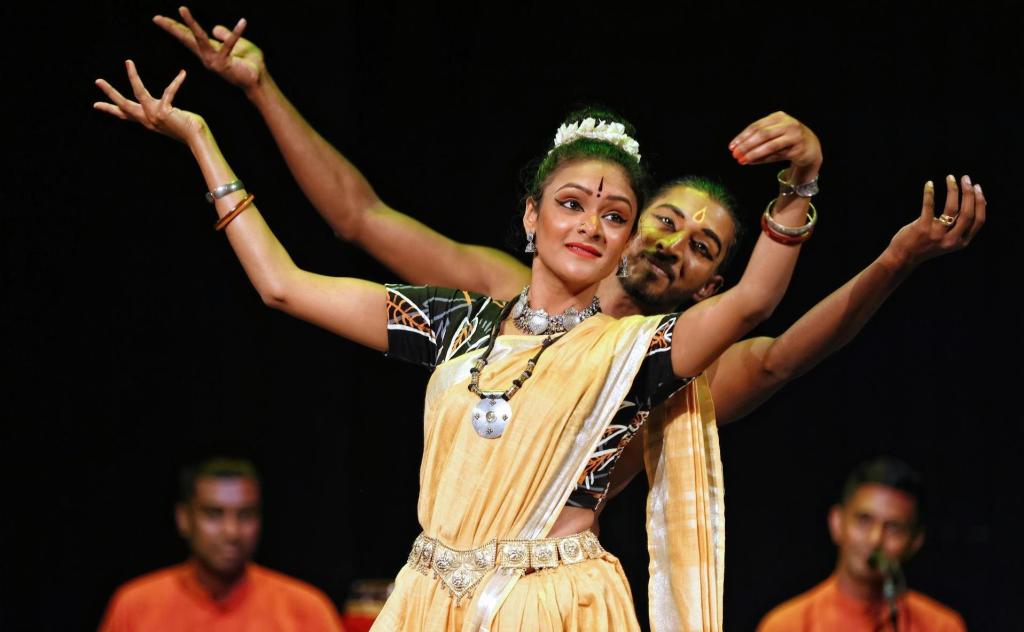 Last Thursday marked the first day of Thai Pongal, a four-day-long festival celebrating the harvest observed by Hindus in South India and Thamizhs around the world. Festivities include the exchange of homemade pongal, prayers of thanksgiving to the sun and earth, and requests for prosperity and abundance as the harvest commences.

That’s why Bhoomi: Our  Country, Arjunan Puveendran and Indu Balachandran’s co-directed production featuring a collective of local carnatic and Bharatanatyam performance artists, woven together with readings from Uncle Bruce Pascoe’s Salt and Shankari Chandrahasan’s prose (penned specifically for the show) was a rumination of stories reclaimed and practices indigenised.

Presented as a part of Sydney Festival on Gadigal country, it was obvious to see how Bhoomi: Our Country prioritised the voices and stories of First Nations peoples, from the way in which Aunty Beryl Van-Oploo acknowledged country, to the way in which images of vast and complex salt plains were projected onto the looming screens of the Seymour Centre’s theatre space as Pascoe read from his collection of essays and short stories. He speaks with authority as one of the First storytellers, and despite being in his seventies, reminds us that it is First Nations People who hold the histories and knowledges and are still doing so through the power of book and oration in the digital age.

The production was a cross-cultural, cross-generational collaboration between two ancient cultures, a Bunorong man of the Kulin nation and first and second generation Thamizhs, as they sought to explore and examine the way in which we as ‘Australians’ owe a huge debt to the First Australian Peoples. How after two and a half centuries of abuses on land and people, acknowledging Indigenous practices and knowledges and sovereignty is perhaps the only pathway to reparations and restitution to those cultures that do not merely treat land as property but as Mother and as kin, and going back to how ‘the old people revere the small and inconsequential’.

The dancers told stories of traditional interactions with the land. In the opening scene, Seran Sivabalan and Kersherka Sivakumaran pay homage to the sun god Suriya, thanking him for the light, warmth and blessings upon the harvest. In tandem, through gesture, folk rhythms and repetition with a spring in their step they gather, reap, bundle and haul fresh crops, a reminder that sustainable food practices and agriculture were Indigenous practices that the Whitewashed Green Revolution has now co-opted and appropriated from. It was a meditation on the way in which communal harvesting practices have been all but erased by hyper-individual ones.

This first montage highlighted the exploitative nature of colonial, capitalist and patriarchal practices that seek to extract and commodify instead of nurture and steward. Pongal is the Thamizh word for abundance and overflow and like all Indigenous cultures points to revisiting traditional practices and operating in an open economy, taking what is needed, sharing resources, allowing for a cycle of harvest.

The third montage further investigated the exploitative, abusive parallels that reminded me of the great devastation witnessed at the start of 2020, with fires ravaging nearly 200,000 kilometres of heritage-listed national parks, coastal towns and cities. The fire-scarred landscape was a sombre reminder that mirrored the words and movements of Sivakumaran, who embodies mythic goddess Sita of the Ramaya, who cries out for desperate respite as her face is painted with anguish asking, ‘am I to fall upon the earth with despair or is the earth to be my salvation?’ Her falling to the floor, in the centre of the Kolam (floor patterns made of rice flour) only just laid out methodically and painstakingly by hand, adds to the concept of transience, temporal custodianship and the fleeting nature of our bodies in comparison to the land. Sribalan, through the swift and angry lines of martial arts, beautifully evoked the sudden drop into the deep sadness and destruction that comes with back-burning and the wonder of discovering a history of richness and fullness deliberately obscured.

But what if this character had not played into gender binaries and instead challenged social stigma, heteronormative assumptions and narrow definitions of masculinity? Instead, it is a male character’s wrath that is hurled upon Sita, playing into Western ideas of masculinity, displaying physical strength, heterosexual prowess and other hegemonic masculine ideals.

More than anything, the production, through soothing carnatic song, mournful flute, masterful veena and upbeat mridangam reminded us of the increasingly dangerous impact colonial and capitalist lifestyles and practices are having on the health of our natural environment as well as on the wellbeing of billions of our fellow citizens.

The irony in all of it was that those who sat in the theatre knew this: we, the middle-class Brown and the elite Whites, paid to have these knowledges danced, sung and read to us while wearing our reusable, handmade, filtered masks as we sipped on organic, locally sourced, bar-bought wine.

But what if this character had not played into gender binaries and instead challenged social stigma, heteronormative assumptions and narrow definitions of masculinity?

The finale, presented in the format of the Thillana, extolled the exuberance of rhythm and held space for the sorrow felt due to the destruction of land. I listened as masks muffled sobs in the row in front and sniffles were snuffled out quickly in fear of COVID symptoms. A deep sense of lament for the destruction of land was palpable.

I couldn’t help wonder though, if it had been me dancing in the place of Kersheka, as a dark-skinned, femme with a thicker set, shaved head and more androgynous facial features, would I have been wept for? A Brown body on stage can never be neutral, and the effects of its inherent politicisation as the characterisation points to not just ‘Mother Earth’ can be a dangerous perpetuation of White saviourism (see climate action vs climate justice) and the subconscious cultural ignorance and biases held that are so seldom addressed.

Or if the roles were reversed, and it was a femme or a non-binary representation of the sun and the earth, would people show the same level of empathy? Do we mourn the loss of what we relate to and are we unable to mourn that which we don’t fully understand? In a town that prides itself on, well, Pride, this production could have pushed the boundaries and had the potential to cater for a ‘female’ gaze, the ‘normativity’ of gendered and sexualised bodies, and the notion of a ‘women’s space’. Is it enough to put on a show with Brown folk, have classical positions, and continue on with assumptions about heteropatriarchy in dance that have long dominated our stages?

It was notable that, despite all our matching masks, mandatory under COVID-safe event guidelines, that I still felt oddly out of place. Perhaps it was because my linen saree was now sodden after the afternoon sun-shower or because I was acutely aware of the way in which working class Brown folk are few and far between in these spaces. Unlike Bhoomi’s debut show, which on Darug Country was a much paler audience, the evening was noticeably more diverse. But what it had in colour, it lacked in class, and I was reminded that conversations around diversity and inclusion, even within performance art and form, demand more than binaries of black and white, tall or short, rich and poor. POC directors must go beyond basic tick boxes and the superficiality of Western approaches to inclusivity, and engage in intentional intersectionality that interrogates the status quo.

The challenge now, for those of us whose psyche this has already entered into, those of us who are already grappling with the vastness and complexity of our devastating history, and those of us who can hold space for both the sorrow in destruction and the joy in the renewal, is to allow Bhoomi: Our Country as a spectacular piece of art, to agitate us into affirmative action and to commit to First Nations sovereignty, not just to heal the nation, but to heal the earth.

Perhaps in 2022 we will be part of a production that enters into a dialogue that integrates two of the world’s most ancient cultures, that holds space for two-spirit First Nations people, inviting dialogue that confronts rigid Brahminical notions of caste, gender and sexuality and reimagines a future outside of segregated readings; that delves into the co-presence of our cultures with a clear dramaturgical arc.

Priyanka Bromhead (she/her) is an Eelam Thamizh multidisciplinary artist and educator who lives and works on unceded Darug land. Her first book, Mozhi, is due for release in April 2021 and is a meditation on language, displacement and colonial culture. She is the founder of 'we are the mainstream', is an earring enthusiast and her love language is a homemade Yālppānam rice and curry.