Cirque du Soleil’s latest spectacle is technically proficient but strangely passionless, a garish spectacle over-produced to within an inch of its life.
Richard Watts 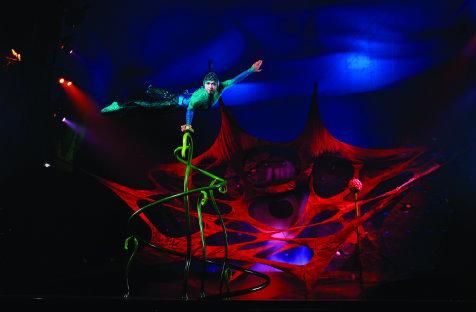 Co-founded in 1984 by former accordionist, stilt-walker and fire-eater Guy Laliberté (whose personal wealth is now estimated at US $2.6 billion, according to Forbes Magazine), Cirque du Soleil is a globally successful entertainment brand, with an estimated annual income exceeding US $810 million thanks in part to popular touring productions such as OVO, which opened in Melbourne last night.

Based purely on the skill level of its participants, OVO – a fantastical, anthropomorphised view of the insect world; Microcosmos with acrobats – is spectacular in the extreme. However it is also strangely passionless, a garish spectacle over-produced to within an inch of its life and almost entirely lacking in emotion and drama.

At its best – such as the flawless foot juggling routine and Icarian games (a circus art in which the performers juggle one another) performed by the red ants (Cheng Jinna, Dong Mimi, Han Jing, Su Shan, Wang Shaohua and Zhu Bayou) in the first act – OVO is deeply impressive. At other times, despite the Brazilian-influenced live music, colourful costumes and dramatic production design (which includes two vast flowers slowly opening above the stage) the show fails to impress. The few moments of genuine wonder are interspersed with bland dance routines and clowning, to the point where the production feels padded and drawn out – sluggish, if you will – while the insectoid performances are so polished that there’s little sense of risk about proceedings. Nor is there any sense of personality to the work – OVO is deeply impersonal; less new circus, more corporate entertainment.

Other elements, such as the short aerial silk act performed by Nadine Louis; the straps duo Svitlana Kashevarova and Dmytro Orel; Volodymyr Hrynchenko’s hand-balancing act; and a contortion routine by Svetlana Belova, Robyn Houpt and Nadine Louis, are proficient but underwhelming, as is the flimsy central narrative concerning a visiting fly (Barthélémy Glumineau), his mock-sparring with the beetle Master Flipo (Simon Bradbury) and his flirtations with the curvaceous ladybird (Michelle Matlock).

Compared to such energetic and artist-driven Australian circus companies as Circus Oz, Circa, Gravity and Other Myths, and The Candy Butchers, the empty spectacle of Cirque du Soleil does not impress; OVO is all art, no heart.