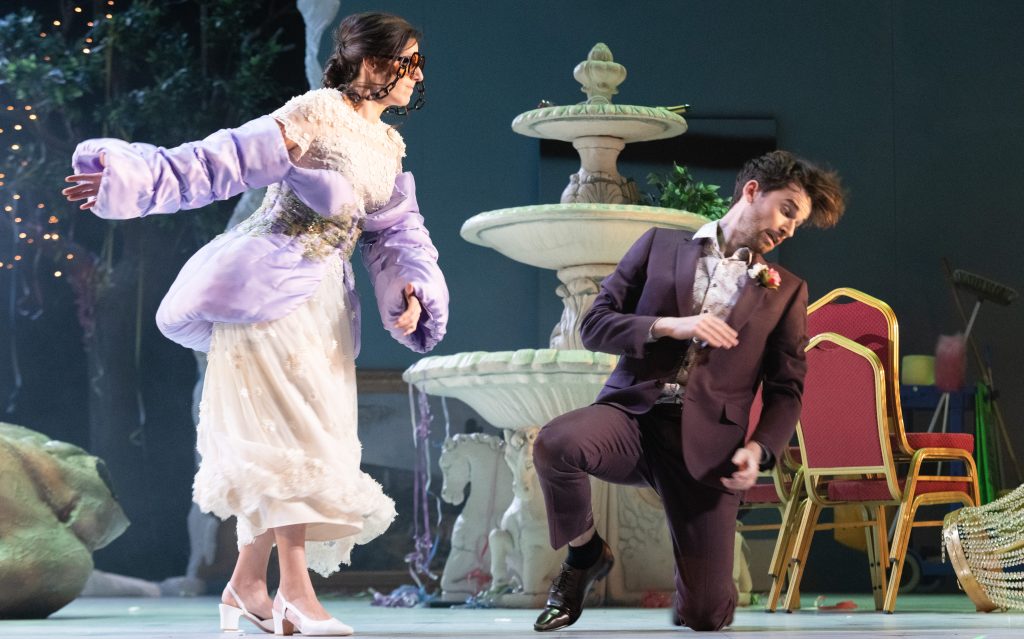 Mozart’s opera is a light-hearted romp about the frothy side of romantic love and its dark underbelly of lust, power and betrayal. Given the disturbing revelations of Parliament House’s predatory culture it has relevance today. And it was a treat to witness the first homegrown production by Opera Queensland in two years; the cast’s excitement, commitment and strong teamwork impressed. Mozart’s score is opulent, familiar and hummable and Dane Lam’s assured conducting demonstrated his affinity with the composer. He steered a responsive orchestra sensitive to the singers.

Jose Carbo’s Count Almaviva, is the epitome of the male who treads awkwardly in the shallow waters of double standards. On the eve of her wedding to Figaro, he wants his servant Susanna to be his lover. Susanna is creditably acted and sung by Sofia Troncoso. Yet, the Count becomes insanely jealous at the very idea of his wife Countess Almaviva, (Eva Kong,) flirting with another man. Carbo’s take on Count Almaviva’s sense of entitlement is eminently believable. Here’s an aristocrat dangerously complacent, out of step with the changing world order. The French Revolution is just around the corner.

Xenia Puskarz Thomas, as Cherubino, is a delight. She owns the stage, sings like a dream, looks convincing and easefully conjures a foppish, womanising sex addict. There’s an unforgettable impishness about her performance which makes her spellbinding to watch as she cavorts and swaggers on stage.

It’s significant in Lorenzo Da Ponte’s libretto that the opera’s heroes, Figaro and Susanna are lowly servants and yet represent virtue, courage and integrity. They find lateral solutions, play tricks on the Count and outwit him, and, are generally admired across the court’s community for the morality and stability they represent.

The understated set, designed by Marg Horwell, complete with a bloodied, disembodied head and a raft of intentionally dowdy costumes – the servants wear a corporate grey uniform – speaks volumes for Artistic Director Patrick Nolan’s vision of an anachronistic culture slipping into irrelevance on the cusp of a revolution.

Yet, it’s a fine balance between portraying an era’s decay and dissolution and the scenery coming across as pedestrian, which was an issue in the first act. But, please lose the beige dressing gown! It’s an eye-abuser that makes Carbo, who’s no slouch, look self-conscious and constrained, rather like seeing Genghis Khan in board shorts, thongs and a frayed pink tee. When the Count discards this downbeat garb in exchange for a smoking jacket, he almost purrs and the audience sighs in relief. His performance was one of the production’s strengths.

As Nolan has directed a new interpretation, it’s a pity the women are locked into exhausted stereotypes of goody-goody virgin, love-sick kitten, and dopey mother-in-law, even though they are well-captured. The Countess is a pampered, vacuous Surfers Paradise wife with a shopping obsession. It would be refreshing if she were portrayed as an author, academic or a social reformer. Nevertheless, Kong’s power lies in her tender, gritty deliveries of her character’s laments.

On opening night, the first half fell a little flat and yet the second leapt into life with its fun setting of a weathered palace, a felled statue and cheery clusters of lopsided hanging lights. Troncoso, as Susanna, gave a lovely, moving rendering of ‘Deh Vieni’ with inspired lighting by Bernie Tan-Hayes. Figaro’s (Jeremy Kleeman) convincing tirade against women hit home. Elise May’s choreography added laudable touches; for instance, in the celebratory scene when the revellers dance in slow motion as though they are already echoes from the past. Nolan’s deft directorial touch of a stretched silence and frozen cast after the Count’s treachery is exposed is a great moment.

*An alternative cast will perform some roles for select performances
including Wednesday 21 July and the matinee performance on Saturday 24 July.

In the event a performance is cancelled due to Covid-19, patrons will be
offered a full refund.