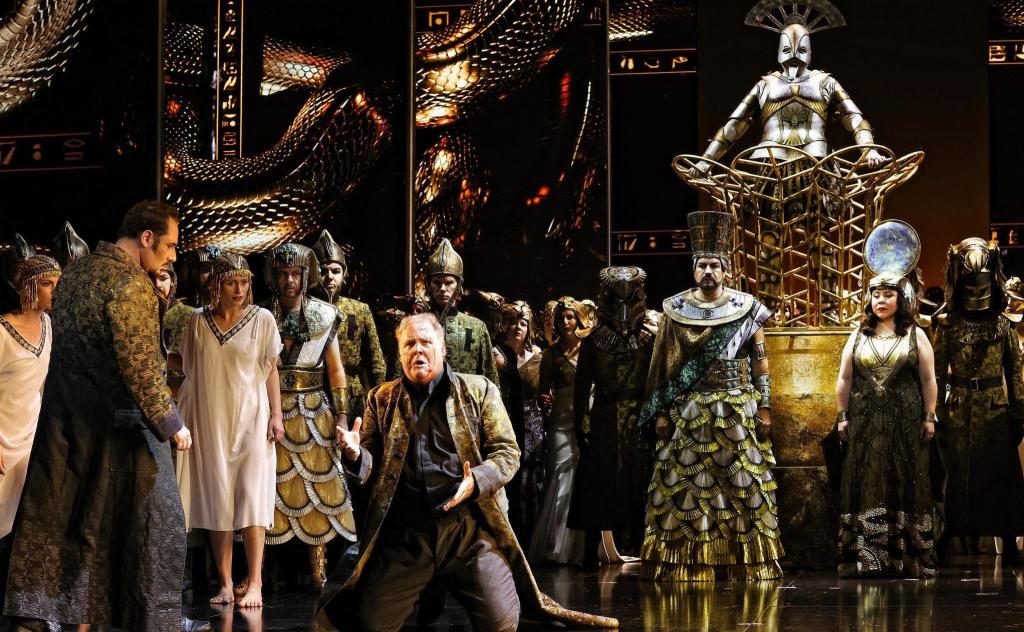 Stefano La Colla as Radamès and Dean Bassett as Messenger in Opera Australia’s 2021 production of Aida at the Sydney Opera House. Photo by Prudence Upton.

In this visually stunning and bravely experimental staging of Aida, audiences will encounter the music and tragic tale the world has long been enamoured with, albeit with a contemporary twist. The production has been brought to life with arresting vivacity through the use of floor-to-ceiling LED screens, and invigorated by captivating physical performances from the Opera Australia dancers, who are imbued with an unmistakable joie de vivre.

Aida has been a smash hit since it premiered in Cairo in 1871, where praise was heaped upon its composer Giuseppe Verdi, who was called back to the stage 32 times to take his bows. Verdi was a giant in the operatic scene for most of his adult life: 300,000 people lined the streets as his coffin was taken to its resting place. Aida, set in Old Kingdom Egypt, was commissioned by Isma’il Pasha, the Khedive of Egypt, for the opening of the Khedivial Opera House.

Aida is a tragic love tale in which Radamès, the captain of the Egyptian guard, falls in love with Princess Amneris’ Ethiopian slave Aida (who also happens to clandestinely be an Ethiopian princess). We know however that the course of true love never runs smooth. Amneris is wrenchingly, unrequitedly in love with Radamès, and when Radamès rescues Egypt on the battlefield from an Ethiopian incursion, the King of Egypt offers Radamès Princess Amneris’ hand in marriage, promising Radamès that he shall one day rule the kingdom.

Aristotle describes in Poetics that in tragedies we first witness a ‘complication’, followed by lots of ‘unravelling.’ What happens next for Aida and Radamès could safely be described as glorious, love-drenched unravelling.

Costume design by Gianluca Falaschi spares no extravagance or detail, with director Davide Livermore (and revival Director Shane Placentino) arraying his enormous cast proudly, all a-glitter with gold. It’s an impressive sight! Luscious and fulsome. This opera features partial nudity, and whether that appeals will come down to a matter of taste: it’s a tiny bit risque, but then again, why not? To be honest it’s just nice to be outside looking at real people again.

This may be a controversial opinion, but I believe that set designer Giò Forma is really showing us the way forward with this inspired LED based set design, coupled with digital content design by company D-Wok. Congratulations for the audacity of this offering. When anything can be conjured on these screens, any endeavour will succeed or fail based on the judiciousness of the displays, and in this production the less literal backdrops won out. I’m not entirely convinced the screens need to move about, although it seemed very impressive at the time.

Set designer Giò Forma is really showing us the way forward with this inspired LED based set design, coupled with digital content design by company D-Wok.

The performance of youthful naivety by the Opera Australia dancers, coupled with their self-inflicted wounds during scenes of sacrifice, nearly coalesced into a comment about the harsh realities of life under a militant patriarchy. Nearly.

As for the performances themselves, they were technically wonderful across the board, if a little staid or stately in their embodiment of Egyptian royal dignity. Warwick Fyfe as Amonasro penetrated this stateliness with an urgent, and earnest energy that was instantly compelling, and clearly invigorating for his fellow performers. Fierce and nervy, he was a thrilling presence on stage. Acting teachers often talk about a necessary quality of ‘danger’ in great actors, which Fyfe could lead a class or two on.

On the way out of the venue I was lectured in the elevator by a passing couple about just how lucky we are to have access to such world class performers in Australia, of all places! It was a wonderful evening of opera, and Aida aficionados shall likely not be disappointed.

Due to the evolving COVID-19 situation and in line with updated information provided by the NSW Government, it is anticipated the Opera House will now remain closed until Friday 9 July 2021. Affected Aida ticket buyers will be contacted with options.