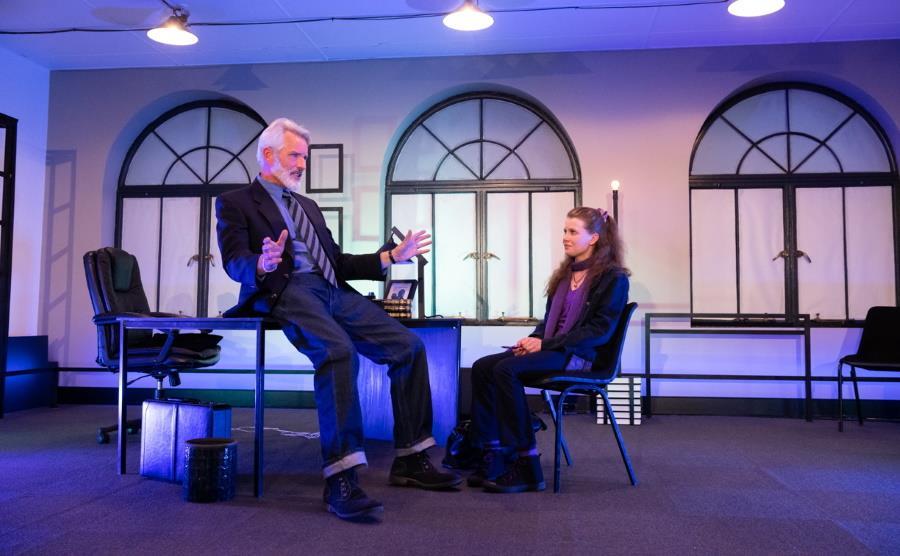 Wittingly or unwittingly (though I suspect the former) David Mamet’s Oleanna arouses controversy. The subject – sexual harassment – is incendiary. The resulting arguments give the audience the added difficulty of having to disentangle legitimate intentions and actual results from distortions and misdirections.

John, a university professor, is accused by a student, Carol, of verbal and physical harassment. Over three acts, these accusations escalate to rape. We the audience are witness to their encounters, and know the accusations to be false.

Or maybe that is just the way it plays out in this production? With a sleazier John, perhaps the accusations would have credibility? Still, as written, Carol is set up by Mamet as a whining liar.

At the end of Act Two and again, with greater force, in the very final moment of Act Three, John violently strikes back. And emotionally that just might work to damn him, but rationally these Deus Ex Machina moments cannot negate the preceding hours of contrary evidence.

Oleanna is famously ‘provocative’, but it demonstrates that in the theatre there’s a fine line between provocation and manipulation. And, for David Mamet himself, between forthright and smug.

And yet, the show did prompt lively post-show dispute. I argued with my companion on the way home, and a vigorous and respectful debate ensued online. And that’s one of the functions of theatre, right? To stimulate debate, to challenge ideas, to shake-us up in our complacency.

However, respectful debate amongst theatre peers notwithstanding, Oleanna has the disturbing capacity to lend solace to men who believe their privilege to be threatened, and who view women as the enemy. ‘Look”, they could say, ‘Look what that lying ***** did to John.’

A century ago, the theatre’s task, according to Chekhov, was to ask questions. This has been superseded by a world in which, if the theatre is to pull its weight, it must – at such times and on such themes – begin to supply answers.

And throbbing behind the controversy is the realisation that we are not disputing aesthetic theories but a topic for which real women are really dying. That makes staging a theatrical performance on the subject a mammoth responsibility. Undoubtedly the decision to program this play arose from a place of serious and earnest sincerity. But the task demands lucid thinking and clear purpose. Sincerity is not enough.

A conventional play may end up in a state of fascinating ambiguity, but a social document dealing with a red-hot contemporary crisis cannot take refuge in artistic ambiguities, or else it risks actually becoming an impediment to progress.

As for the production itself, it makes the best of a play burdened by artificial dialogue, predestined arguments, improbable plot points and a phone that, implausibly, manages to ring at every crucial moment.

The soundscape is rich, though rather too thick in Act One where one strains to hear the actors.

The playing style is understated. Guy Hooper and Karen Ireson successfully create two unlikable characters, and play them with subtlety and disarming – even uncomfortable – truthfulness. These are brave, vulnerable performances.