This musical melange of Vienna meets Canberra was well represented in this Opening Gala with classical and contemporary works.
Suzannah Conway 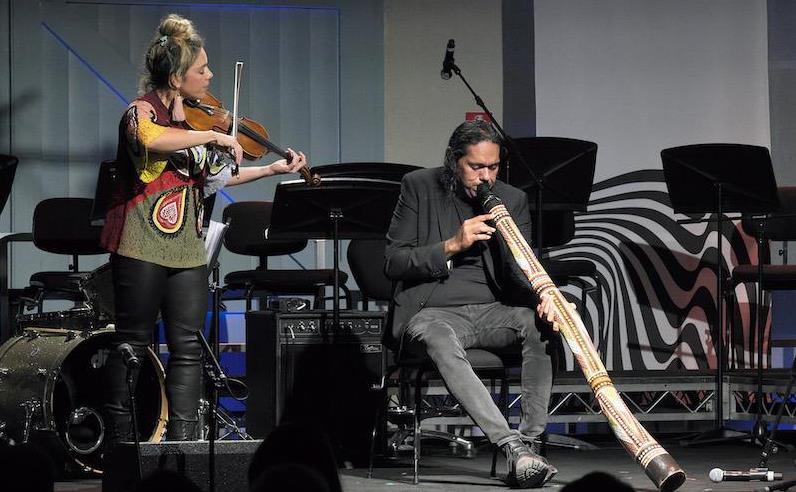 After being forced to cancel last year, the 2021 Canberra International Music Festival is back, despite having to obey COVID rules and restrictions on concert numbers. Artistic Director Roland Peelman AM has assembled an impressive program featuring over 20 main concerts, five dedicated breakfast events and several innovative musically-linked events over a packed 10 days.

The emphasis is on Australian artists, so one might question the word ‘International’ in the title, but we all understand the current realities. Peelman, always entrepreneurial and with a glass half-full approach to programming, has commissioned and offered opportunities to a record number of contemporary Australian composers. A theme linking our colonial European musical heritage through ‘the idea of Vienna’ alongside sharply focused contemporary Australian music shows a way in which we can celebrate Australian connections to the peoples of the world. In particular, Peelman has emphasised the work and cultural practices of our First Nations’ artists, giving them a strong musical voice in this festival, an important and valuable response.

This musical melange of Vienna meets Canberra was well represented in Friday night’s Opening Gala with works by Mozart and Beethoven sitting alongside those of celebrated didgeridoo player William Barton, composer Kate Neal and Brenda Gifford’s world premiere work, Djiribawal. Moreover, the large and airy Fitters Workshop with its excellent acoustic proved to be a more than adequate atmospheric venue.

William Barton and Véronique Serret gave us a piece called First Light to open the concert. Walking slowly from the back of the hall to the stage, their respective instruments offered a world waking up. Barton’s amazing ability to shape the musical sounds of his evocative  didgeridoo to represent the animals and birds in the bush, while intoning resonant background noises, was magical. Meanwhile, Serret’s haunting violin with its sweet timbre added warmth and depth, the marrying of the two instruments from different worlds making a powerful statement.

In particular, Peelman has emphasised the work and cultural practices of our First Nations’ artists, giving them a strong musical voice in this festival.

American/Australian pianist Edward Neeman gave us a showy interpretation of Mozart’s Piano Sonata, no.11 in A Major, with its marvellous and ever popular third movement, Alla turca. The first movement, Andante grazioso, was suitably restrained and melodic, gently paced and with a light touch on the keyboard. The second Menuetto movement with its graceful fluidity offered some fine trills and arpeggios while the third was suitably forceful and strident, as Mozart so clearly intended.

The Golden Gate Brass Quintet gave a solid reading to Kate Neal’s newly-composed piece, Fanfare, an annual Beaver Blaze tribute in honour of Betty Blaze, a lifelong supporter of the arts in Canberra. This was a gloriously rich fanfare, utilising the range of trumpets, horn, trombone and tuba to great effect. Its cleverly constructed composition of both individual and combined brass sounds, was syncopated but lyrical, offering musical challenges that the players managed extremely well.

Beethoven’s three Equales for trombones, famously played at his funeral, is a masterly and solemn work in three short sections, moving from a slow-paced and stately first section through a liturgically doleful section and finishing with a strong, harmonic third. Despite a few intonation issues, the playing from Nigel Crocker, Ros Jorgensen, Brett Page and Scott Kinmont, on what appeared to be old instruments, with two tenor and two bass trombones, gave us some beautiful harmonies. Positioning the performers in the centre of the hall was also a master stroke.

The final and major piece of the program was Brenda Gifford’s world premiere work Djiribawal, Yuin for ‘the elements of nature’. It was originally conceived for the 2020 festival as a collaboration with the Australian Art Orchestra, but gave us additional instruments and the festival strings for it’s delivery in 2921, alongside the exquisite playing of William Barton on didgeridoos.

The first movement, Bagan (earth) gave us dark, earthy sounds commencing with a haunting bass clarinet, and a powerful, rhythmic beat from percussion, solo violin, bass and trumpet. Ngadjung (water) introduced the didgeridoos, at first the whispering sounds of water gushing and birds calling, but gradually building to a torrent of orchestral sound with a fierce unrelenting beat. The ethereal qualities of Miriwa (sky) gave us a gently played lyrical piano, joined by a sky song from boy treble, James Hodgson,whose sweet voice soared gently above the orchestra. The final, Ganji (fire) started as a rumbling in the undergrowth, with muted sounds from percussion, trumpet, clarinet, bass and didgeridoo, building in intensity to a cacophony of raucous music which came to a sudden and abrupt ending. Djiribawal is a roller-coaster of sonority and musical images, the large canvas work beautifully paced and composed, representing the elements in all their brutality and beauty and played exceptionally well by talented musicians.

This was an impressive opening concert from the festival in a lovely venue, with a well thought-through and delivered theme presenting classical alongside newly commissioned works. And it bodes well for the next nine days.