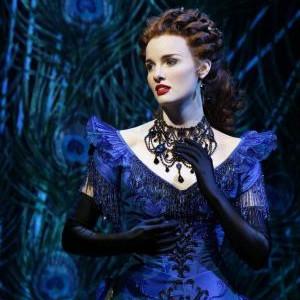 The story of Christine Daaé, a fledgling opera singer; Raoul, Vicount de Chagny, the young nobleman who loves her; and the titular masked madman who is grooming Christine for greatness, Andrew Lloyd Webber’s The Phantom of the Opera is ‘the most successful entertainment venture of all time’ according to the BBC, and has been seen by over 80 million people worldwide since its 1986 London premiere.

Love Never Dies is Lloyd Webber’s sequel to The Phantom of the Opera, and opened in Australia on Saturday after decidedly mixed reviews in the UK. The original London production (which is reputedly ‘haemorrhaging money’, according to recent newspaper reports) has been significantly overhauled by director Simon Phillips, and features a brand new – and spectacular – production design by Gabriela Tylesova, as well as arresting performances.

Set in 1907, ten years after the events of Phantom (and conveniently overlooking the fact that the original musical took place in 1881), Love Never Dies unfolds in New York’s famous funfair, Coney Island, to which Christine – now a famous diva and mother to ten-year old Gustave – and her husband Raoul have been lured by The Phantom.

Saved from the hands of a vengeful French mob a decade ago by choreographer Madame Giry and her ambitious daughter Meg, and secretly installed as the master of a Coney Island freak show and music hall, The Phantom pines after Christine, his muse, without whom his life has no meaning and his music no inspiration (opening number ‘‘Til I Hear You Sing’).

Reunited (‘Beneath a Moonless Sky’), the Phantom begs Christine to sing for him one last time, in return for which he will pay off all of Raoul’s gambling debts and leave them in peace at last. Their reunion, of course, cannot be so easily engineered, sparking tragedy, madness, murder and betrayal before the final curtain falls.

For fans of the original The Phantom of the Opera – which this reviewer is not – the story of Love Never Dies presents several significant challenges. Characters have changed considerably in the intervening decade – romantic hero Raoul has become a boozy, bad tempered gambler, while the Phantom, who formerly killed without compunction, has become an altogether blander, less threatening figure.

A key plot detail is equally problematic. In the parlance of fandom, the events of Phantom have apparently been ‘retconned’ (from the phrase ‘retroactive continuity’) in order to create a paternity drama that drives Love Never Dies.

Even for theatre-goers who are not ‘phans’, the story lacks cohesion. It ignores Chekhov’s advice about guns fired in the final act being visible in the first, and introduces a character’s derangement so abruptly, and so late in the piece, that it comes across as pure deus ex machina. The conclusion of the tale is anti-climactic in the extreme.

Also problematic are the musical’s songs and lyrics. The latter are leaden and expository, while musically, despite lush orchestrations, there simply isn’t a showstopper; that one grand song which catches the heart in the throat and which audience members find themselves still humming a few days later.

Songs such as ‘Dear Old Friends’ (a dynamic quartet) and ‘Devil Take the Hindmost’ (a dramatic vocal duel between The Phantom and Raoul which opens the second act) go some way towards advancing the plot and simultaneously serving as memorable show tunes; conversely, Meg Giry’s second act number ‘Bathing Beauty’ adds nothing to proceedings save for evoking a sense of period, albeit in a forced manner. The Phantom’s dramatic number ‘The Beauty Underneath’ at the end of the first act is a jarring rock epic which sits uneasily with the songs around it; while the presence of several musical motifs from Phantom throughout the production only serve to remind audiences of the weaker score here.

Performances, thankfully, are generally excellent, especially Ben Lewis as The Phantom and Anna O’Byrne as Christine, though young Kurtis Papadinis as Gustave was thin and reedy on opening night.

Likewise, Simon Phillips’ direction is clean, confident and strong, and Graeme Murphy’s choreography keeps the cast moving smoothly around the constantly evolving and rotating stage. The real star of this production, however, is Gabriela Tylesova’s spectacular production design, which sees a Coney Island rollercoaster transform into a sea-side pier; a leering, Luna Park-like faux proscenium arch looming menacingly over the stage; and a garish array of exquisitely costumed freaks, carnies and hoofers.

Beautifully lit, with crisp, clear sound, Love Never Dies ticks all the boxes in terms of technical production, direction and performance. If only the story weren’t so thin, the drama so contrived, and the songs so lacking.

At its heart, Love Never Dies has no heart. It is a hollow spectacle, grandly distracting but unengaging, lacking depth, drama and genuine emotion. As The Phantom sings at one point, “Diamonds never sparkle bright/If they aren’t set just right.” Here the setting is perfect, but the diamond is revealed to be glass.

The Sunday Age: “But while Melbourne’s creatives have done a sterling job translating this work from page to stage, the problem is they have really had just one page to work with.”

Crikey: ““In my mind I hear melodies pure and unearthly, but I find I can’t give them a voice without you,” the masked one seethes in the opening scene. He is grotesquely mortal now, stripped of the alchemy, the hypnotic allure, of the original. Much like this sequel.”

Theatre People: “Operatic in scope, intimate in detail, the Australian production of Love Never Dies is an artistic triumph, set to be envy of the world stage.”