Worthy of multiple viewings, Lilith: The Jungle girl is stoopid-good.
Anthony Rebelo
[This is archived content and may not display in the originally intended format.] 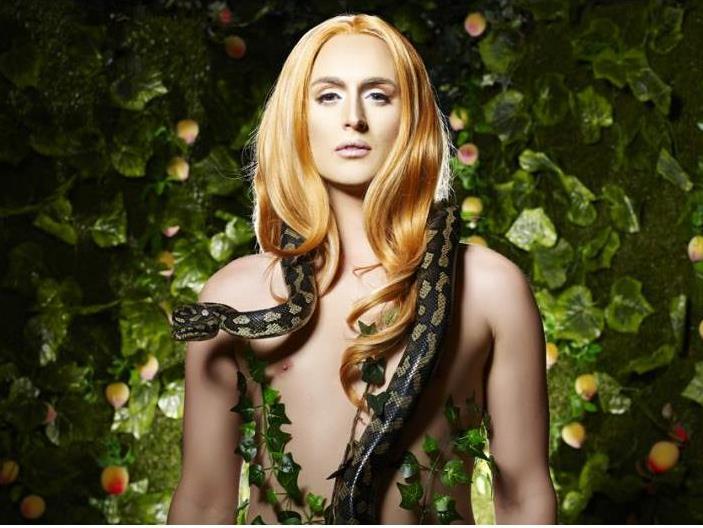 The MTC NEON NEXT Festival initiative sets off for another in-your-face-year with the queer-fantastic, envelope-pushing Sisters Grimm production of Lilith: The Jungle girl: A hilariously, high-pitched satire about so-called evolution and cultural displacement (complete with hip-hop lions).

In late 19th century Holland, at the tail end of the world’s fascination with naturalism, renowned neuroscientist Dr Charles Penworth (Candy Bowers) and his assistant Helen Travers (Genevieve Giuffre) are assigned the task of examining a puzzling oddity poached from the wilds of Borneo. The savage and primitive beast (Ash Flanders) is poked and prodded until it becomes apparent that it is perhaps more than the simple creature the doctor initially diagnoses it to be. Named Lilith due to her seemingly untameable nature, the doctor slowly begins a process of integration into civilised society but it isn’t long before Lilith begins to ask the question: who here are the true savages?

Flanders and director Declan Greene, who make up the theatre making team of Sisters Grimm, have skilfully fashioned another comedy that traverses cultural displacement, feminism and definitions of civil society while still serving their unique trash-bag aesthetic. Lilith is vivid yet bonkers, silly and strange, yet manages to twitch the occasional nerve keeping in line with their previous rebellious theatrical works.

With only three on stage, Bowers, at first, steals the show. Her character, Dr Penworth, the charming yet clueless genius, is generously given all the one-liners to Giuffre’s sidekick, straight woman’s corrections. But as we move on and Lilith emerges, a flutterby [sic] from her cocoon, and Travers (or Helen) moves to make her own passionate mark, it’s impossible to shine a light anywhere but across the cast of three as they equally encompass their roles so well.

Lilith’s blend of mischievous comedy and light-hearted political treatise is accentuated and made whole through the music, sound effects and animation. Composer, The Sweats, covers hip-hop, Enya-like dreamscapes and mind-altering psychotic episodes to great effect. While animator and video designer, Emma Valente’s collage and stop motion animation smoothly ties the gender flipping, table-turning aspects of the production together adding hilarity or necessary repose. Marg Horwell’s set design allows for inventive and intelligent montages as well as some kooky, collage flashbacks and chaotic splattering of pink sludge. It’s a beautiful mess. In fact, during a pivotal point of change, the audience is left waiting a little longer than is perhaps planned. We wait and wonder as to what’s going on behind the curtain but as the track creeps toward the final lyric and starts again, we realise – it doesn’t really matter. It’s a great example of the chaotic nature of reality, which the play quips over seamlessly, and the wondrous anticipation and pleasure that you can only get from coming to a live show.

At the forefront, Lilith is funny, witty and subversive. The humour comes quick only to surface again and again serving more. In fact, if you laugh too long, you may miss the next pun or bon mot. The clever writing and the sheer fact that Sisters Grimm manage to touch on such a myriad of current affairs while a naked man covered in pink sludge writhes on the floor and lions talk of body image, is testament to their position as one of Australia’s best independent theatre companies.

Anthony Rebelo is a freelance writer based in Melbourne. He has studied at RMIT University and is currently working on a novel.