A theatrical exploration into the creative mind of novelist Stephen King, this new play by Lee Gambin lacks nuance, but has so much heart it virtually bleeds on stage.
Richard Watts 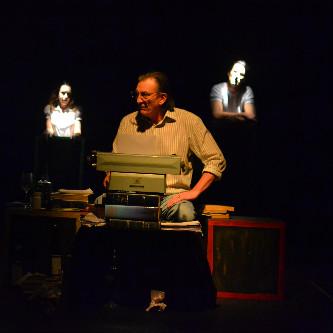 Crouched over his typewriter and relying on booze, coke and pills to kick-start his imagination, horror novelist Stephen King sits tormented by writers block, waiting for the muse to strike. But rather than inspiration, his subconscious dredges up characters from his already published works to mock and torment him, as the boundaries between real life and fiction slowly begin to blur.

Written by Australian playwright, essayist, and regular contributor to horror film magazine Fangoria, Lee Gambin, King of Bangor sets out to explore the relationship between a writer and his work; examining the alchemical process by which a writer’s imagination takes personal experiences and transforms them into fiction.

Unfortunately, while Gambin is clearly knowledgable about his subject, he fails to adequately explore the writer’s psychology in compelling detail. King’s struggle with writer’s block and addiction, as depicted in King of Bangor, feels more cartoon-like than truly dramatic, an impression reinforced by Dione Joseph’s one-note direction and a tone which borders on the hysterical.

American accents are inconsistent, as are the performances, with some exceptions. Mim, who plays King’s housekeeper, demonstrates good chemistry with Peter Berzanskis as Stephen King, but when she takes on the role of an obsessive, intrusive fan (either inspired by, or the inspiration for, the crazed Annie Wilkes in King’s novel Misery) her performance needs reigning in. Of the remaining cast members, Nicholas Brien as King’s errand boy (as well as characters from Salem’s Lot and Christine) is the strongest, with Tamara Donnellan also noteworthy.

The lighting design by Roxan Bowes is simple but effective, while Gowri Paary’s set design is ill-suited to the stage and forces the actors to awkwardly clamber over and around it. The live score – provided by violinist Christine Munroe – is suitably evocative, and displays a restraint lacking in the rest of the production.

Despite its faults, King of Bangor is a passionate piece of theatre, with so much heart it virtually bleeds on stage. I may not have especially enjoyed the play, but it did inspire me to re-visit King’s oeuvre, starting with his classic vampire tale, Salem’s Lot, for which Gambin and company can take all the credit.

Rating: Two and a half stars

Australian Stage: “A wonderful look into the thin line that divides reality from illusion, King of Bangor is an unsettling tale of what can happen when creation surpasses creator.”

The Age: “To the extent that Lee Gambin’s King of Bangor is intended to serve as a dramatic illustration of writer’s block, it’s barking up the wrong tree.”