A spectacular work of dance imprisoned in a plodding narrative.
Alison Croggon 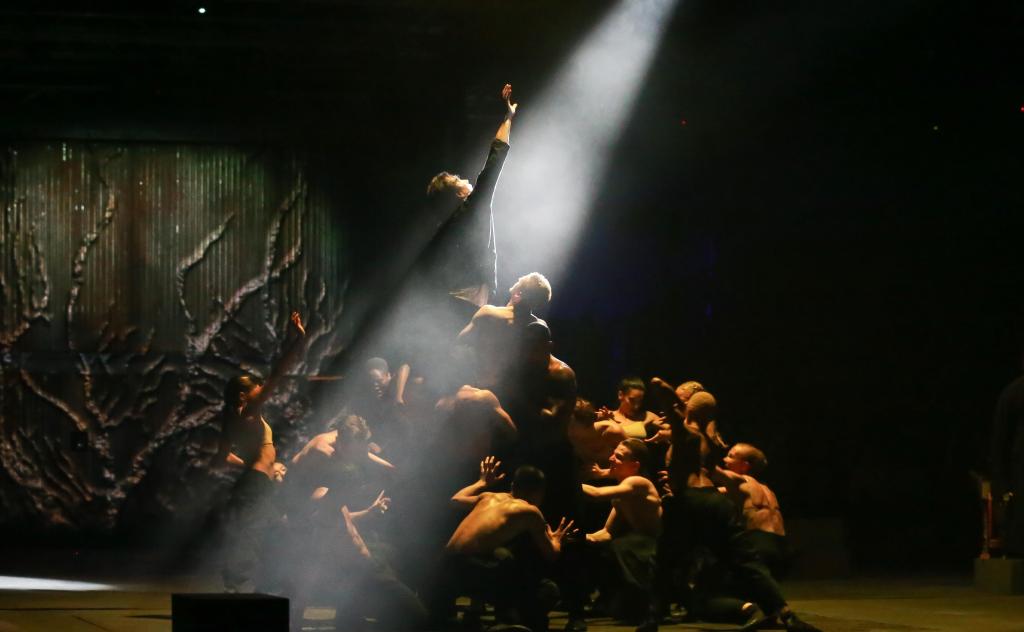 In Italo Calvino’s novella Invisible Cities, a fictional Marco Polo describes 55 fictional cities to a fictional Kublai Khan, ruler of the vastest empire of his time.

The book itself is a playful exploration of the sensualities of the intellect and imagination. The cities Polo describes – all named after women – become the occasion for philosophical speculations on memory, desire, language and mortality.

Turning this most cerebral of books into a stadium spectacle of dance, drama, video and design sounds, at first blush, like a dodgy idea, but on the other hand, the co-director is one of the world’s most exciting contemporary choreographers, Sidi Larbi Cherkaoui.

And thanks to Cherkaoui’s work with the dancers of Ballet Rambert, there are moments in this production – the major event of the final week of David Berthold’s final Brisbane Festival – when you feel a thrilling rush of possibility.

Director Leo Warner says in his program notes that ‘the question of whether this is one of my best ideas or an act of pure folly is for the audience to decide’. I think it’s not so much folly as half-realised.

If only Warner had trusted Cherkaoui to translate the mysteries and pleasures of Calvino’s prose poems fully into acts of performance, Invisible Cities might have been an astonishing thing. But for me, a nagging disappointment persisted through much of the show.

In the opening moments, as the camera swept over mountains, deserts and boundless plains, I wondered if I had mistakenly wandered into an epic historical movie. And when the first scene opened on the long formal dialogue between Polo (Matthew Leonhart) and Khan (Danny Sapani) that sets up the story, my heart dropped into my boots.

For the most part, the show’s possibilities are imprisoned in a ponderous, banal armour of words. Adaptor Lolita Chakrabarti frames the action with a crude narrative, in which Polo, whose father and uncle are imprisoned by the emperor, is sent out by Kublai Khan to report on his empire. The drama consists in Polo’s pleading for the lives of his relatives and Kublai Khan’s fear of mortality.

This has very little to do with anything in the book, but it takes a lot of words to explain. So. Many. Words. And these static dialogues dominate the performance, pulling focus on what’s happening on stage and often reducing the dance to mere illustration.

There’s no denying the spectacle, which is remarkably achieved. The performance is set in a huge warehouse, with the audience divided into four sections. We’re initially divided from each other by curtains that also function as screens for projections – maps, evocations of Renaissance text, lushly filmed landscapes and seascapes – which sweep open to reveal a vast, cross-shaped performance space, itself enlivened by some inventive CGI.

At last the dancers have some air, and the stage becomes a sweep of bodies, creating an exhilarating, volatile sense of transformation and nimble choreographic thought. It was so worth it for those moments, but I wish they had been permitted their full potential.