A strong piece of theatre drawn from the stories of real Australian women.
Lynne Lancaster 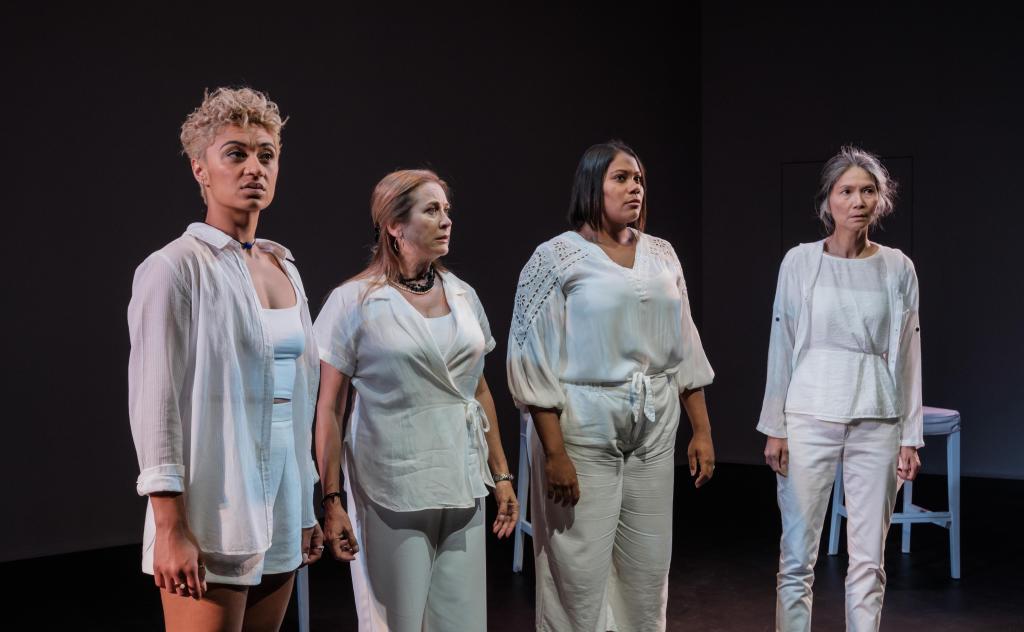 Directed by Victoria Midwinter Pitt (who is also credited as lead writer), I’m With Her is very simply staged, with five tall stools on stage, a white stage floor and white screen backdrop. There is complementary and at times starkly dramatic lighting by Kelsey Lee and some wonderful film footage, as well as projections of words and phrases (including comments about Julia Gillard).

The fabulous cast of five perform with great gusto and intensity, balanced with warmth and humour.

The title of the work comes from Hilary Clinton’s 2016 campaign. The play examines the position and treatment of women in society, from domestic violence to the struggle against sexism and abuse in areas such as elite sport, politics, academia and sex work. The monologues drawn from real-life stories are interspersed with scenes challenging our perceptions of the way women are regarded and treated.

Why must women have no voice? Why do they not feel safe? Why is a woman’s body not regarded as her own? Why are women catcalled, harassed, and violated, and expected to keep silent and put up with it?

Lynnette Curran is inspiring as both Julie Bates, talking about safe sex and how women can take control of their bodies, and as Dr Marion Blackwell, speaking of her battles to become a scientist.

Gabrielle Chan as Sister Patricia Madigan examined the position of women in the Catholic Church and questions why it is so controlling and patriarchal and why there are no female priests. But it is not just the Catholic church – many faiths segregate women and won’t allow them to speak. Why must women be silenced?

Shakira Clanton as Prof. Marcia Langton AM has a very biting monologue about the treatment of Indigenous women and the shattering facts of domestic violence they suffer. She asks the very tricky question: is our legal system tolerating, even encouraging the femicide of Indigenous women? Clanton is also sensational as Pam Burrridge, revealing the sexism behind the scenes in world-class surfing.

A showstopper monologue that had the audience cheering was that of Julia Gillard as portrayed by Deborah Galanos. The backstage machinations and double standards of politics, how she was criticised because she was a woman and didn’t have children, how reporters focused more on what she wore than all the hard work she did (she is the PM with the highest rate in history for passing legislation) were just some of the topics covered.

Nikki Keating was given a vibrant performance by Emily Havea as she talked about the way bartenders are treated, all the unwanted unacceptable behaviour and comments from customers, and how she stood up and led the campaign to say that wasn’t okay.

Havea also gave an inspired performance as basketball and football player Erin Philips, talking about inequality in sport – and all the fuss about that photo.

Deborah Galanas gave a powerful performance as Dr Anne Aly, addressing the prejudice she faces as a woman and a Muslim. She declares that ‘Parliament is the most patriarchal, racist institution in the country’.

In this #MeToo and Time’s Up era, I’m With Her highlights how women are standing up and speaking out, with forthright and colourful language.