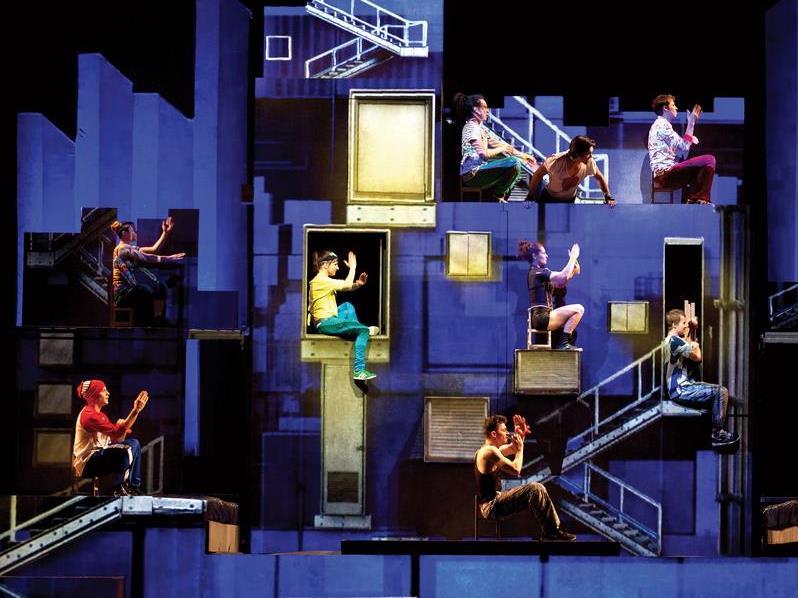 Cirque Éloize, the second largest circus in Montreal after Cirque du Soleil, is at the Sydney Festival 2017 presenting their show iD, a high energy mix of stunt cycling, urban dance, and skating together with magnificent circus.

Directed by the co-founder of  Cirque Éloize, Jeannot Painchaud, iD is set on city streets and loosely based on the rivalry between two different street gangs. The show’s success hinges around the sensational set design and video projections created by Robert Massicotte. The physical set, a building with windows that performers can climb in and out of, and with different levels of rooftops that the performers can climb on, changes constantly through the use of dark and moody streetscape projections creating different 3D environments.

Highlights of the show include the trampowall act which is stunning. The male performers jumping from the rooftops at the top of the set, perform twist and tumbles in midair before rebounding from the trampoline hidden at stage level, to bounce back to the top of the set again. The level of skill and the nail-biting precision of the timing is breathtaking.

Aerialist Diana Gonzalez performs a surprising aerial hoop act with the apparatus rigged differently from normal with two ropes running to either side of the hoop. She explores its movement potential with artistry and inventiveness.

The juggling with the elegant, precise movement of Jean-Philippe Deltell was a delight, and the group skipping act was amusing, and highly enjoyable.

However, the creative highlights in this show are the moments in which the two aspects of the show, namely circus and urban arts, are brought together, and explored and developed as an interaction to generate new movement language. This combination is at its most successful in the innovative silks act performed as a duo between the in-line skater, Jon Larrucea, who partners the aerial silks artist, Nicole Winter, bringing an unusual speed and dynamism to the interactions; and the duo act between the female contortionist, Nicole Winter again,performing a ground based duo with one of the male urban dancers. In thesesections the two movement languages generate material showing the true potential of collaborating across disciplines.

This combination of streets arts and circus in iD is a real crowd pleaser, and the audience at Riverside Theatre in Parramatta were whooping throughout the entire show and at the end gave the performance a standing ovation.