Flinders Quartet: Shall We Dance?

The title of this concert was an invitation to the dance that was both issued and picked up by the Flinders Quartet.
Suzanne Yanko 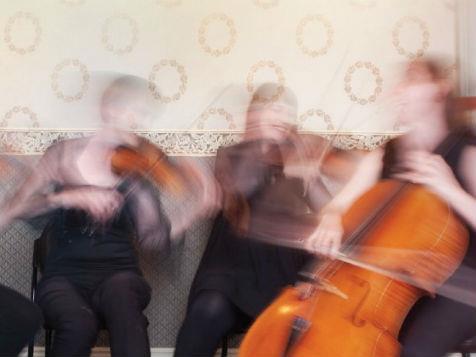 In this half of the program the Flinders Quartet took to the stage, with Edwardes’ long instrument stayed silent and swaddled behind them. Violinist Helen Ayres took the lead, with Piazzolla’s Tango Ballet an obvious starting point. Its gritty, unsentimental Argentinian dance music featured syncopation and reiterated notes in all parts.

It was followed, however, by a passage of unashamedly appealing dance music. Second violinist Ian Cameron played a wistful solo picked up by the other violin and viola, while the pizzicato cello briefly accompanied them. Then the viola took the work in a new direction, with Piazzolla’s characteristic harmony provided by the other players.

Flinders Quartet moved with ease from the busy sound of the streets to the more reflective sections such as Solitude, with Helen Ayres’ violin leading the ensemble in the melody’s evocative minor-key melody. At times the cello had a “drone” effect as Zoe Knighton created a fuller impression of street sounds.

Knighton then introduced the Borodin String Quartet No.2 in D major, with an amusing word of thanks to Borodin “the feminist”. While the Allegro moderato began a little tentatively, soon the gentle and sunny melody captured attention.  There was focus on first violin before the development drew all players in, achieving Flinders Quartet’s usual lovely balance. The music flowed like a stream to a quiet ending; eye contact ensured the last note was exactly together.

The second movement, scherzo, was of course a dance, the third a Notturno. Both incorporated some very well known melodies, so it was good to hear them in the original forms (rather than the sentimentalized ones). Some people felt moved to clap between movements, but that was understandable – and not so intrusive as it can be with less popular music.

The final Andante made reference to Beethoven unison, as the cello gave the lead to pick up speed. The performance was notable for its precise polyphony and observance of Borodin’s changes of tempo. It made for very enjoyable listening – but much more excitement was to come. During the interval the marimba was uncovered in preparation for percussionist Claire Edwardes. There were a number of other instruments next to it, which added to the anticipation of an exciting performance.

However, in a good piece of programming, Edwardes combined with Cameron (first violin throughout the second half) to perform Piazzolla’s Oblivion, the gentle sound of the marimba matching the yearning melody of the violin. This was followed by a better-known piece by the composer, Libertango. The syncopation within the piece was notable, and there was surprise in the way the sound suddenly swelled. Its South American roots infused the piece, prompting the person sitting next to me to exclaim: “So excellent!” He was right.

Closer to home, Ross Edwards’ dance Arafura Adagio was a quieter piece with the marimba at first keeping the beat to a rather mournful sound from Quartet, then assuming a solo role until the gentle and evocative strings joined in to bring the piece to a quiet end.

Edwardes was then to have her best opportunity to show off her prowess, in Jessica Wells’ arrangement of Prokofiev’s music for Romeo and Juliet.  It should be said, however, that while Edwardes is a stylish and, at times, brilliant performer, she plays without fuss, moving apparently seamlessly between the marimba’s four mallets to a snare drum, triangle – often a huge array of percussion.

In the opening Romeo at the Fountain, however, Edwardes had the bass melody and was like an extension of the quartet, whose Hill was playing a delicate staccato. This partnership was varied for Juliet’s “theme”, with a very busy marimba playing the tune with first violin while the others provided the harmony.

All five players then contributed to the street scene, the catchy melody and sprightly feel evoking the animation as people woke up.

A noteworthy use of the marimba was to “describe characters” at the ball as, later, the drum contributed to that great deep deliberate sound associated with the Montagues and Capulets. However, this is a perhaps the world’s best-known heartbreaker of a love story, and Flinders Quartet (with the marimba of many moods) created the sad, inevitable move to the tragedy.

The Morning Serenade, with bright cheerful strings, and triangle as well as marimba had a delicate pizzicato after a fast-moving melody. All too soon the marimba was almost like a harp, gently filling in harmony to accompany the strings as Cameron’s violin told of the tragic events in the tomb.

All players on the night did well to be as believable in this beautiful last work as they had been earlier, creating the impression of dance music in the streets of Argentina. The concert was a great success, both in its conception and the performance.

Suzanne Yanko is the editor of www.classicmelbourne.com.au. She has worked as a reviewer, writer, broadcaster and editor for Fairfax Digital, the Herald-Sun, the South China Morning Post, Radio 4 Hong Kong, HMV VOICE - and, for six years, ArtsHub.   Email: syanko@artshub.com.au