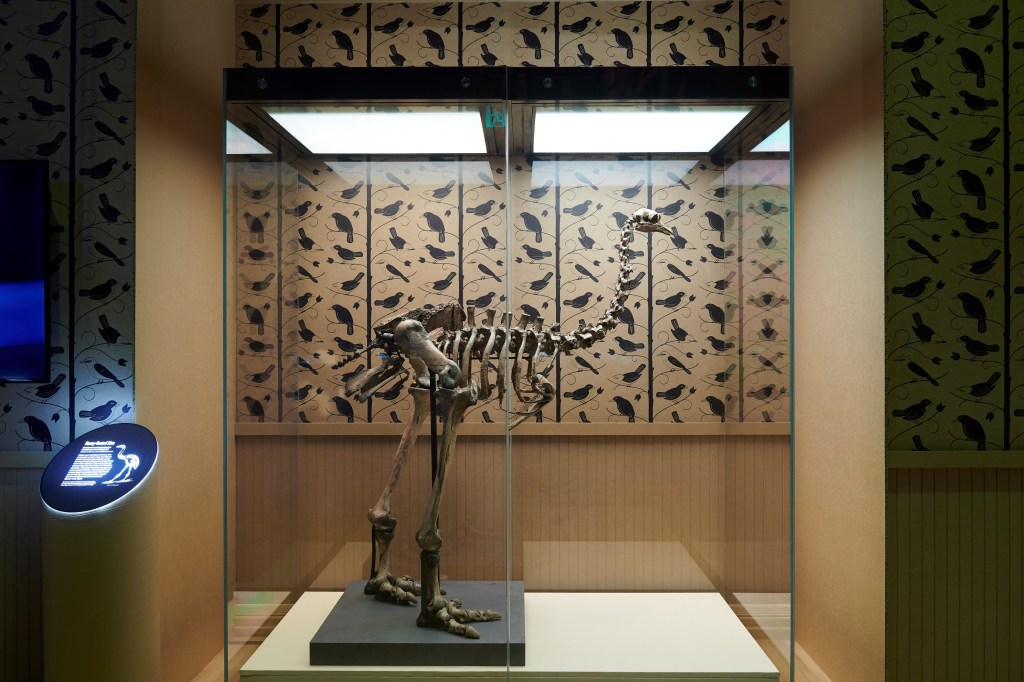 A heavy footed moa featured in Treasures on the Natural World at Melbourne Museum. Photo by Eugene Hyland

Treasures of the Natural World captures wondrous things from another time and presents another way of understanding humanity’s relationship with the world around us. Evolving from 17th-century Enlightenment thought, museums and the collections they house are symbols of colonial thinking and plunder; it is therefore important, if not a little uncomfortable, that curators have chosen to bookend this exhibition currently showing at the Melbourne Museum with the voices of the Boonwurrung, Woiwurrung and Taungurung people, as a reflection of contemporary discomfort perhaps, with our colonial past.

More than a year in the making, Treasures of the Natural World features over 200 ‘rare scientific, historic and culturally significant objects’. Working remotely because of COVID restrictions, London’s Natural History Museum’s curators and conservators in partnership with Museums Victoria have developed an exhibition that explores the evolution of these interesting, important and at times controversial collections and the stories surrounding them.

Travelling through a dimly-lit labyrinth with moments of dramatic lighting to create a sense of awe, the visitor works their way through forests and under the skeletal forms of prehistoric creatures to mountainous regions and flat plains. The interior layout and design of the exhibition is impressive and measured, as is the support material: didactic panels, interactive screens and text labels accompany the objects on display.

The information is presented in digestible chunks with ‘floating’ snippets of curious facts such as ‘In rainforests, cassowaries are important gardeners. They eat the fruit and disperse the seeds of over 200 plants – in their poo!’ The visitor is also challenged by questions such as ‘How are families of plants related to one another?’ ‘What is the evidence that dinosaurs once lived?’ and ‘What makes a species evolve?’

We are introduced to important collectors whose collections have become the backbone to London’s Natural History Museum, once part of the British Museum. After his death in 1753, the collection of Sir Hans Sloane, who amassed 400,000 natural history specimens during his lifetime, was bequeathed to the Natural History Museum. Such collections were influential in the evolution of the discipline we now know as science, where observation, collection and classification formed the basis to understanding the natural world. King George III (1738-1820) had collections of scientific instruments and gifts from foreign powers while Walter Rothschild (1868-1937), who was from a wealthy banking family, employed dozens of collectors around the world to find objects for his collection. Swedish botanist Carl Linnaeus (1707-1778) established a revolutionary new way of naming species in the natural world. His system is still used in the international science community.

Included in the exhibition is an ancient Egyptian mummified cat, an offering to the Egyptian goddess Bastet and one of over 250 animal mummies in the museum’s collection. Through a glass cabinet we are able to view Pliny the Elder’s Historia Naturalis, the oldest book in the Natural History Museum’s library, a type-set version of Pliny’s manuscript published in 1469 after the invention of the printing press in Venice. It included zoology, botany, geography, human physiology, metallurgy and mineralogy.

Also on display is a first edition of Charles Darwin’s On the Origin of Species, (1859) one of the most influential books ever written. Darwin was inspired to publish his findings after Alfred Wallace (1823-1913) outlined the same ideas on the theory of evolution by natural selection. Darwin knew his book would be controversial to a public who had been educated to think life on earth was the design of divine intervention.

The skeleton of the sabre-toothed cat that roamed the Americas in Pleistocene Epoch, 12,000 years ago reflects how, through natural selection, large cats have evolved. The size of a lion with huge teeth, it feeds on large plant-eating mammals such as bison, camels and horses.

More than just a physical space, a museum is a political space, reflecting not only its collections but the stories they tell; stories that revolve around collectors’ whims, financial capacity, era in which the collection was developed and of course the education and gender of its collector. In the 19th century, the time frame in which many of these collections were created, the gallery model was one centred around white men as the makers, explorers, collectors and authors. Collector’s such as Mary Anning (1799-1847) who unearthed extinct reptiles in rocks of southern England and Dorothea Bate (1878- 1951), a palaeontologist whose life’s work took her to islands in the Mediterranean and who worked at the Natural History Museum for 50 years, receive minor acknowledgement. Bate, unlike her male colleagues of the time, was paid by the piece rather than salaried.

At the very end of the exhibition is a gold nugget, kara kara, found in 1853 near Heathcote in Victoria and sold to the British Museum. The text label that accompanies the exhibit leaves us with questions to contemplate; is this a treasure because of its size or because it is a ‘piece of country’? A screen facing the exit and the glare of bright lights from the merchandise shop beyond, might give you an idea of the view of the Indigenous inhabitants of this land.