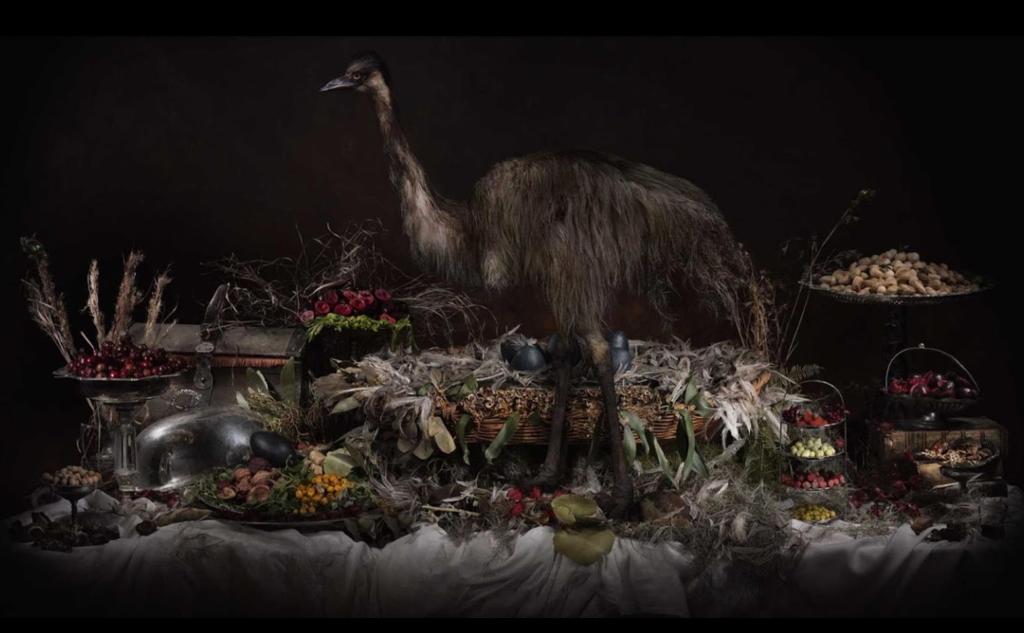 This exhibition is dark. Literally, the vignettes that Michael Cook creates for his new series Natures Mortes (translated Dead Nature) seemingly hover in a dramatic black setting, their frames and non-reflective glass allowing the viewer to sink into their world of otherness, and despair.

They are also dark in their subject matter. While on first glance Cook’s photographs take on the opulence and painterly staging of the Dutch Old Masters, these images offer a narrative as contemporary to our day in their jar and tensions between First Nations connections to Country and a lingering lack of regard for climate and environment by all who live on this land.

Natures Mortes is Cook’s eighth solo exhibition with Andrew Baker Art Dealer (Brisbane), and these eight photographic works take a different direction for Cook. Typically, they are incredibly researched, accurately staged and provocative as his previous series have all been, however, they are perhaps less literal in their stitching of the figure to fact.

These new works are deeply allegorical – offering a sea of clues that one sinks into with a heady curiosity to unravel – a reaction that is heightened by Cook’s dramatic lightening and choreographed balance within these images. They are impeccably constructed images.

It’s not surprising, then, prior to the opening, the walls were already substantially peppered with red dots.

Overall, the series maps the devastating impact of colonisation on Australia’s First Nations peoples played out by native and introduced flora and fauna. Each story is told around a central tableau.

Take for example, Nature morte (Aliment) which is a groaning cornucopia of native bush foods, over which an emu stands, its black eggs glowing like desirable jewels.

Cook points to the role these plants and the emu play in bush medicine and in sustaining life. Aliment (meaning food and nourishment) is curiously an anagram of ailment (sickness), and this image plays out the narrative of disease that came with a Western diet.

Similarly, on first glance Nature morte (Exploitation) presents as a bounty of seafood – a banquet for the taking. However a heron, which overshadows the feast, holds an oil-soaked fish in its beak. The eye then starts to skip and collect clues. Several of the crustaceans and an octopus are shiny with oil; and alongside is a bowl full of coal.

Here Cook asks at what cost is our thirst for fossil fuels and its damage to our resources? It is an incredibly subtle delivery – like a realisation that sneaks up on you. It is a very different climate message than the kind of placard roll out we are so often faced with but its impact is more lingering.

Alongside it is the image Nature morte (Colonisation), which offers the central clue in an open book with a portrait of Captain James Cook. Simply, these images are all entwined and interrelated.

Here the objects that populate this tableau speak to the zeal of the British explorers – binoculars, a quill and ink well, sword, and as writer Louise Martin-Chew points out, an Aboriginal gweagal (shield) with a hole in it attesting to the violence of first contact.

Perhaps the darkest image is Nature morte (blackbird), which refers to the term ‘blackbirding’, where South East Islanders were lured onto British ships using music, to then be shipped as slave labour for Australia’s sugar industry. This is played out with the inclusion of a viola and weighing scales in the tableau. Black cockatoos sit at the edges of the darkness, witness to the unfolding narrative.

Religion, agriculture, flora and other bird life are played out across the series with equally dark twists on their veneer of beauty and bounty. Surprisingly, the series doesn’t feel heavy or depressing. If anything, we are hardwired as voyeurs, and by nature are curious when faced with a puzzle begging to be solved.

It is worth nothing that the gallery offers a viewing of the suite in two sizes – small downstairs and more expansive scaled prints upstairs. While on any other occasion this duplication would have felt stale, here it offers the answer to our viewing curiosity – the smaller images a teaser that leave you wanting more.

There is, however, a sadness deeply embedded across these images. They are less a wake-up call and more a lament for what has already been lost.

Cook grew up in a white family, and much of his work taps into this emotion of loss and displacement.

One suspects these images will start to find their way into our museums and galleries nationally – Cook’s timing with these works tap into renewed museological thinking on how institutions collect and tell stories. They offer a treasure trove of alternate perspectives.